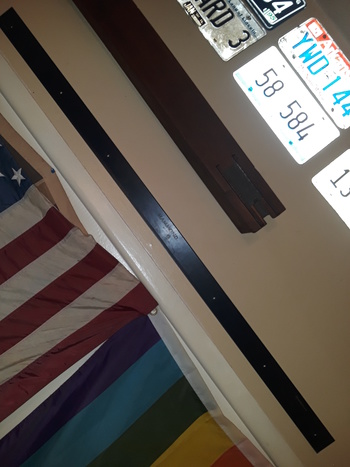 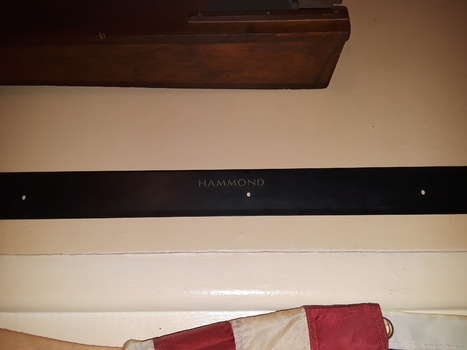 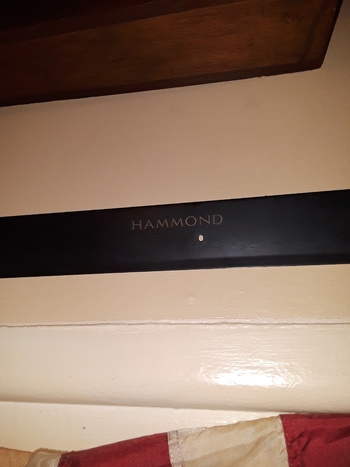 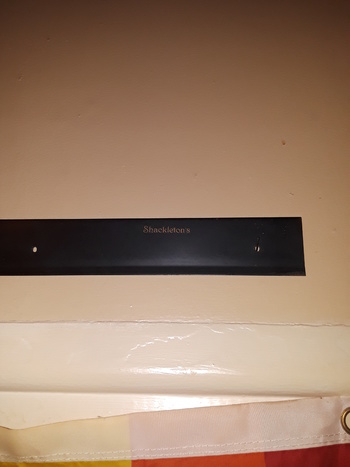 [the long, narrow black thing in the diagonal of pic1, to get it all into one pic]

In the pipe organ world we'd call this a "keyslip", in the HAMMOND organ world it also serves as the "upstop" to hold the individual playing keys in place in their keyboard beds. This part is also somewhat unique amongst most other serious keyboard instruments in that it is made of metal instead of wood, and even moreso because the Hammond Instrument Company (of Chicago, IL) chose to screen their most prominent maker's name onto the middle of this part. (where nearly all other organ and piano makers tend to choose the aptly called 'nameboard' instead) Because this also serves as the 'upstop', it is considered a permanently mounted part of any keyboard frame assembly, one cannot remove this without literally reducing the whole thing to its hundreds of individual nuts/bolts/springs/keys.

Every vintage Hammond organ from the 1930's through the 70's (or so) had one of these under its upper keyboard, the lower keyboards had the same basic part without the name on it. Nearly everybody recognizes what a "Hammond B-3" is (even when they really don't know what it is, but oh well...) and in reality there were also Model A's, B's, C's, D's, E's, and M's (I dunno what happened to F thru L?) produced over the decades, with or without a suffix number. They all had this but there weren't ever extras made as 'spare parts', so anytime one is found orphaned now it means a whole keyboard/organ somewhere else bit the dust, permanently, first. There are actually somewhat valid reasons why some Hammonds met their ends this way, as 'parts donors' for other more desirable Hammond instruments and whatnot.

This one came to me already removed from a "parts organ", so I don't know the when's/what's/why's of it specifically. It is pictured here as freshly hung on the wall in my den, as yet one more oddity for folks to ask about, after I came across it again recently. I didn't recall one more detail about it, pic 4 shows it also bears the name of (what I presume is) the store or dealer who first sold whatever organ this thing came from. It measures about 52" long.