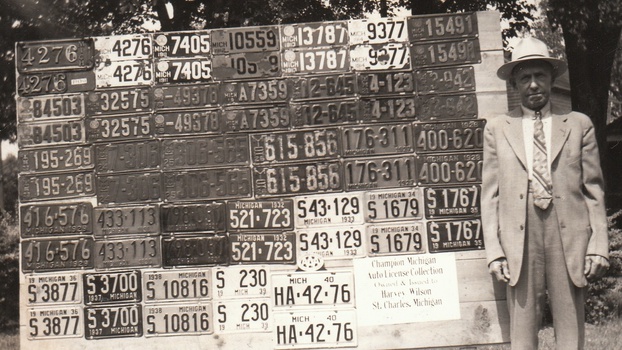 License Plates used to be made by the same folks who "turned big rocks into little rocks" and lived in the "Graybar Hotel"....prisoners. They still do in Michigan! The prisoners also make little fake toy ones, I would link to the site but it has an address a mile long.

Despite Detroit's woes, it is still car country out here, and antique auto shows happen all the time...fellas in their second childhood bring them out, put on Gatsby caps, take the top down and clog side streets at 30 miles per hour. On a given weekend you can follow an oldie but goodie to the nearest show. I guess they all need a plate to go with their cars. I can't really think of any other reason to collect license plates, except as roofing shingles.

Mr. Harvey Wilson was Champion Michigan License Plate collector, at least in St. Charles. There is no date, but as the last two 1940 plates look fairly clean, so that's how I'm going to date the photo.

There is an Automobile License Plate Collectors Association but since I am not a member, I can't look up "The Plate of the Year."