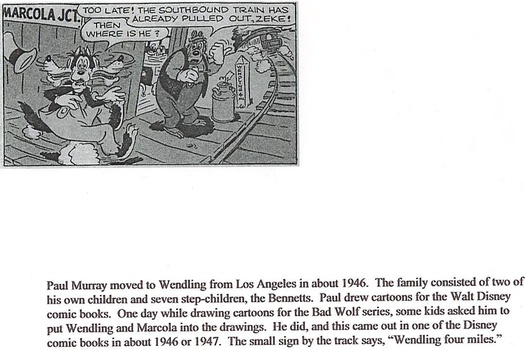 Just a picture is all that I have. In around 1946-47 A cartoonist for Disney lived near by . The small town that we lived in was Wendling.Or. and was hardly known to anyone in Southern Ca where Disney was located. One day as he was drawing cartoons for the bad wolf series,some kid's ask him if he would include the town of Wendling,and a near by town Marcola. He did,and this picture was later in the Bad wolf comic book. Note: The sign Marcola,and the small sign by the tracks says Wendling 4 miles. Some had searched for this Comic Book,but no luck.One day a man made his way to the small area of where Wendling used to be,he was from the Uninted Kingdom (wow) He explained that he was a fan of the cartoonist,and was searching out the home site that he once lived. He also said that he had all of the comic books that the artist was invoved in ,and agreed to send this copy from his comic book.