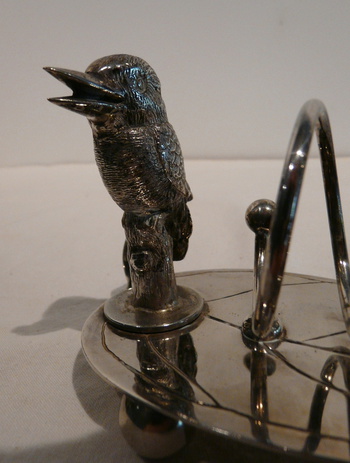 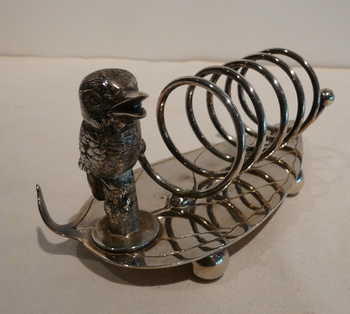 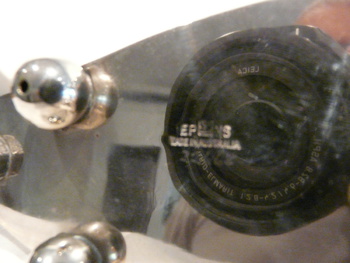 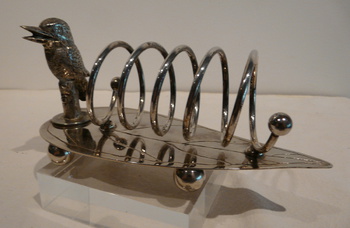 An Australian item that here is no longer considered a piece of 'Kitsch' but is part of the Powerhouse Museum's collection in the city of Sydney where I live. We call this type of ware 'Australiana'.

I found it in a St Vincent de Paul store six months ago for five dollars, took it home and gave it a polish. It had been ignored for years but the EPNS plate was still fully intact. It dates from the 1920's - 1930's when there was a vogue for using Australian flora and fauna on commercial items.

It's always nice to have something that a museum has also seen as being worthwhile. Mine is just a little bit better, however!

The description of the item at the Powerhouse Museum is:

A toast rack made in electroplated nickel silver featuring a large flat base in shape of eucalyptus gum leaf with veins engraved into top surface, four spherical feet attached underneath and a the four-slotted toast holder formed by spiral of thick circular section wire with rounded ends and attached by threaded bolts through base to washer and knurled nuts. Marked on base.
Made: Phoenix Manufacturing Co Pty Ltd; Melbourne, Victoria; 1920 - 1930
Marks: Marked on base 'E.P.N.S. / MADE IN AUSTRALIA / REGISTERED / 181'.
Height 60 mm Width 75 mm

"The toast Rack was made by the Phoenix Manufacturing Company in Melbourne, 1925.

The Phoenix Manufacturing Co. was established in Melbourne, Victoria, in 1915. The company's formation was in response to World War I and the subsequent reduction of imports from the UK, USA and Europe. By 1919 Phoenix were employing 125 people and by 1928 had doubled the size of their premises. However, by 1950 this good fortune was to change. The combination of growing public acceptance of stainless steel and a Post World War II doubling of sales tax to 66 percent eventuated in the closure of Phoenix in the mid 1960s."

My toast rack is the exact same except that it has an added "kookaburra". Phoenix also made kookas that were used on a variety of forms: trophies, napkin rings and tableware.

This toast rack is an example of the golden era for the production of domestic silverware in Australia by early 20th century silverware manufacturers.