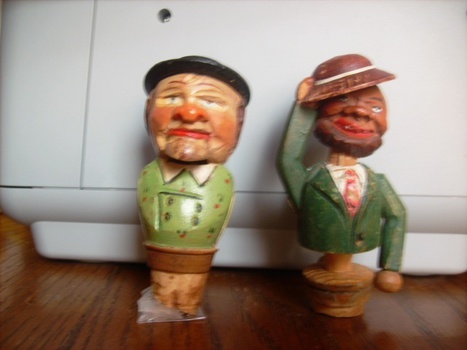 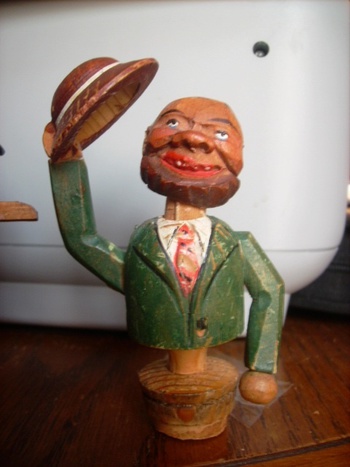 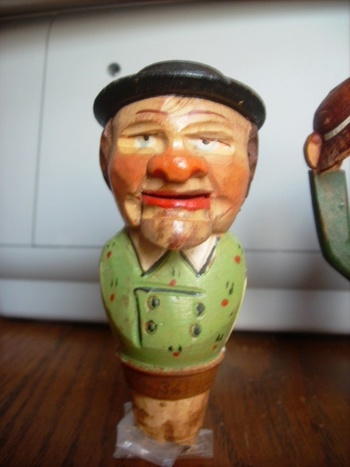 The Italian Anri company made these bottle stoppers from 1912 until the mid 1960's. The earliest were hand carved by people who lived in the Groeden Mountain area and were made to resemble actual people they knew. Over time the stoppers lost their "individuality" and became more like caricatures.

I inherited these two from a friend of mine. The large headed gentleman on the left is commonly called a "yakker" and moving the lever on his back will open and close his mouth. This poor fellow has a broken cork and a tendency to tip over. The gentleman on the right is a "hat tipper" and works by pulling on a little wooden ball attached to a string on his back.

Unfortunately for me, Anri used paper labels to mark their stoppers and those labels are long gone. Based on what I have found online my guess is that these are mid-late range Anri's, maybe 1950's. They do not have the wonderful individuality of the very early stoppers but they also do not have the plastic heads and very poor carving of the latest stoppers.

I don't know much about Anri stoppers, but 80% of what I do know I learned at this wonderful web site: http://www.anricarvings.com/stops.htm , so I would like to take a moment to thank the internet for making information so easy to share with others! 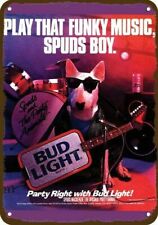 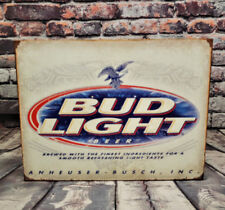