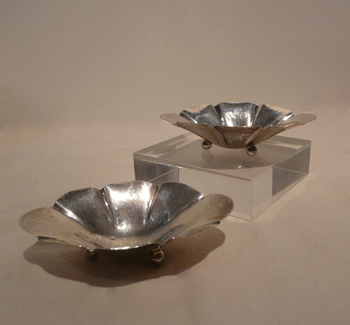 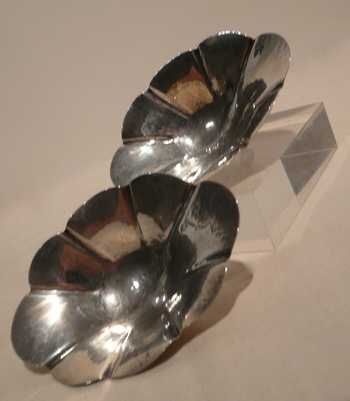 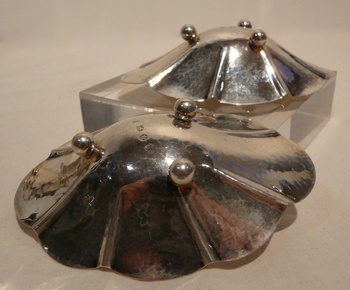 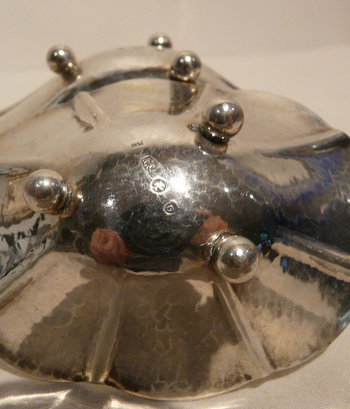 I have a taste for things Dutch. I also like silver.
I bought these silver salts at a regular haunt. The silver marks are not the same as the English marks that we normally see here in Australia. But it does resemble the English system because there are four marks:
a) a maker's mark or "Meesterteken"
b) a lion rampant silver standard mark
c) the assay office mark or "Minervakop" &
d) a date letter.
Interestingly these salts were made during the Second World War. One of the salts bears the Letter "F" for 1940 and the other "G" for 1941. The Netherlands were invaded by the German Army on 10th May 1940.
http://www.925-1000.com/Fnetherlands_Date_Code.html
They are made of the second silver standard of Holland .833/1000 indicated by a 2 between the Lion's legs.
On the Minervakop is the letter "A" that indicates that they were assayed in Amsterdam. Mind you the letter is not always that obvious. There were 17 different assay offices. I don't have a complete list of them yet but what I have gathered so far is this list:
A = Amsterdam
B = Utrecht
C = Den Haag
F = Leeuwarden
K = 's Hertogenbosch
M = Schoonhoven
The Makers mark is different as well. It reads: S2V
I've found out on the net that this would refer to a firm in Amsterdam and Zaandam: W.S. & A.s. Vet also known as S. I Vet & Zonen (sons),

These salts are very much in the German Art Deco taste of the period. I especially like the ball feet and the planishing on the salts.