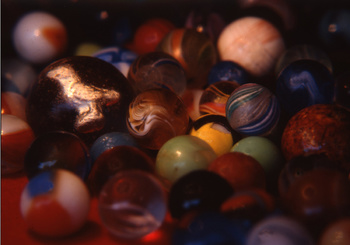 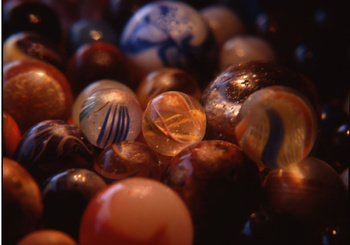 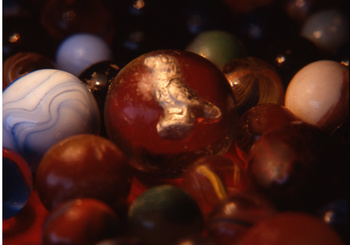 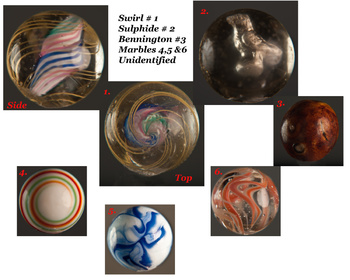 I have always found Marbles to be one of the most intriguing and beautiful pieces of glass. As a kid just about all the marbles were called cats eyes,or pruies. I liked to play Marbles, I just was not good at it and most of the time I lost. Marbles in the last few years are the toys of old people and I fit right in that group. So for the last 30 years I have picked them up one by one or in small groups never more the 5 or 6 at a time. I always look in button cans or tin cans with mixed items in it, just to see if there is a Marble or two some where in the can. Not until about 15 years did I research marbles and a hole new world opened to me. There is several good reference books about marbles and I have one. I have seen Marble collections with each marble displayed separately but that's not me. I just put them in a large glass candy container from before the turn of the century where I can see them when I want. I do not play with them because I know I will lose. I have learned that the German's made a large amount of the marbles imported into the U.S. before the turn of the century. The marble with the small ceramic person or animal inside is called a Sulphides and have a real good market value, sometimes into the thousands. The German Swirls also bring a good amount. One thing matters and that is condition to the serious collector that is but not to me. I have one Sulphide (Crow) and about 8 Swirls as well about 60 other marbles. I like them all the same. This is one thing I learned when at a garage sale, if I see a marble that I want in a button or mixed object tin, I always ask the price for the hole tin. Once I say the word Marble most sellers do not want to lose their marbles. When that happens I always leave disappointed. After answering a question about one of the marbles pictured in this listing, I took some close up pictures of individual marbles that I pulled out of the candy container. Three of the Marbles I have identified but three I could not, that is why I have now asked for help in identifying the unknown marbles. Please see the last picture of the 4. A little help please Hardbrake