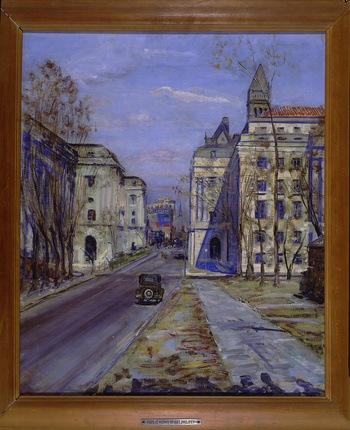 THIS PAINTING IS BEING POSTED FOR COMPARISON WITH HELLOKITTY'S DONIPHAN PORTRAIT OF A LITTLE GIRL.

WHEN MY RESEARCH IS COMPLETE ON THIS TOPIC, I WILL POST THE BODY OF OUR DONIPHAN FINDINGS on the hellokitty6811's 'Dorsey Doniphan' Show and Tell. That Show and Tell can be found at:

This image and accompanying text comes to us from the great courtesy of the Registrar @ the Curator of the U.S. Treasury Dept., Washington, D.C. Where I have added text, I have placed it in brackets.

Label text: Edwin Dorsey Doniphan was born in Washington, D.C. His art training began at the Corcoran School of Art, where he studied under the influential American painter Edmund Tarbell, one of Boston's leading artists at the turn of the century. He went on to study at the School for the Museum of Fine Arts in Boston. While at the Corcoran, he won a gold medal for his work. Doniphan is best known for his city scenes of Washington, but he also painted portraits, as he stated in his autobiography written for the Treasury's Section of Painting and Sculpture: "[I] painted portraits of a number of persons, some of whom would like to be prominent, but [I] prefer to paint oxen."

Doniphan's painting was completed in Washington, D.C. for the Public Works of Art Project. A newspaper article at the time characterizes his work as "excellent."

Doniphan's work has been exhibited at the Corcoran Biennial, in most states and in several foreign countries. Doniphan's works done for the Department of Treasury's Section of Fine Arts include two murals at the Marlinton, West Virginia, Post Office and easel paintings in many federal buildings. He was a member of the Society of Washington Artists and the Watercolor Club of Washington, as well as the American Artists' Professional League.