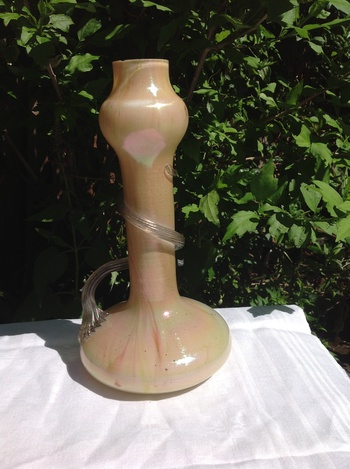 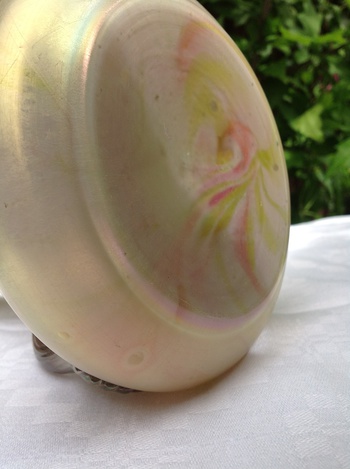 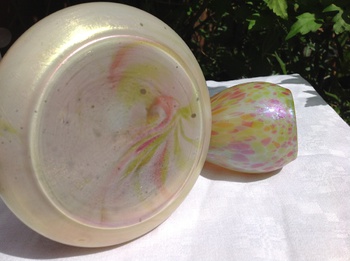 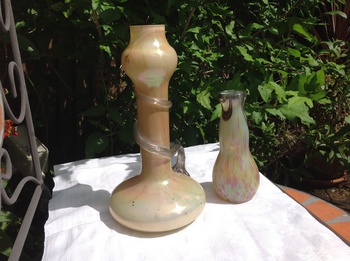 Here we have what I think is a Rindskopf marbled vase, newly acquired with another I will inflict on you on another occasion. Now, I like it, but I'm not sure I'd be putting it before you connoisseurs but for the fact it may provide a clue to another piece I've posted - http://www.collectorsweekly.com/stories/55635-kralik-or-something-else?in=user
At the time I thought that vase might be Kralik, but Bohemianglassandmore suggested it could be Rindskopf - and listed a number of features he considered to be markers. They did not include the peardop pink and yellow spots.
Then this vase came into my possession. You will notice from photo 2 of the base that the marbling is made up of rather bright, peardrop yellow and pink ... which was something of a surprise to me at least and got me thinking.
Now, I know you can't really tell much from colours alone, not least since all the main manufacturers may well have sourced their colour rods from the same place, but it is an interesting combination together, and not something you see that often (in my limited experience) unless you have a penchant for old-fashioned British sweets. So, look at photo 3, both pieces side by side - to my eye there are some rather striking similarities of colour and combination.
The final photo shows the two pieces together, and without that view of the base I'm not sure I'd have made the connection.
So what do you think? Top marks for Bohemianglassandmore?