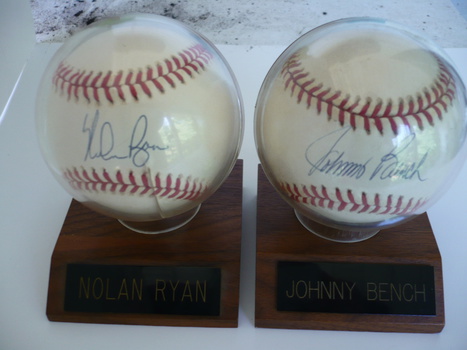 Nolan Ryan and Johnny Bench. One Threw fastballs and the other caught em'. When Johnny was at the plate with a bat he knocked em' out of the park. Nolan Ryan is currently principal owner, president and CEO of the Texas Rangers. Ryan was an eight-time MLB All-Star, and his 5,714 career strikeouts rank first in baseball history by a significant margin. A member of Major League Baseball Hall of Fame. Johnny Bench played in the Major Leagues for the Cincinnati Reds from 1967 to 1983. Bench, a 14-time All-Star selection and a two-time National League Most Valuable Player, was a key member of The Big Red Machine, which won six division titles, four National League pennants, and two World Series championships. ESPN has called him the greatest catcher in baseball history, and I have to agree.