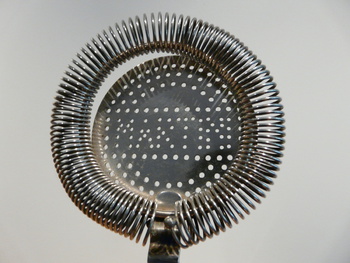 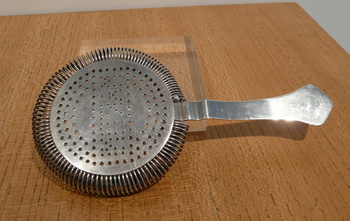 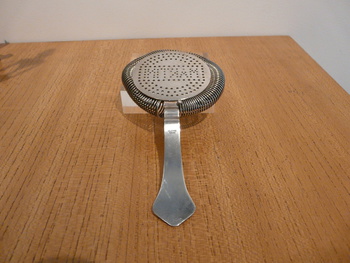 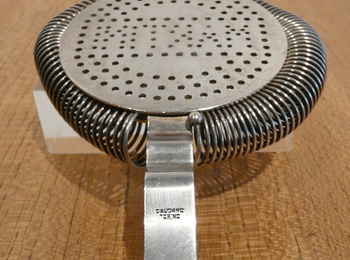 Cocktails for the Fourth?

Cocktails have been a big thing recently on CW ; ) Bellin!
This is an item that I found in a box of thrown-away cutlery in a thrift store. I saw that there was a mark on the handle, thought Alessi but instead saw "Caudano". None the wiser, I looked again and was able to make out the word "Martini" in the perforated shield.

"H. L. Mencken called the martini "the only American invention as perfect as the sonnet" and E. B. White called it "the elixir of quietude"." (Wikipedia)

C. Caudano was a company that produced cutlery in Turin (Torino), Italy. The company was in business at Piazza Carlo FELICE 28, since 1854. They made razors, coffee grinders, kitchen weights & scales, "elettrodomestici, articoli per la tavola, tutto per la casa, per ogni casa". They used a trademark of "Il Popolare" (The Popular aka "of the people").
http://straightrazorplace.com/show-tell/79054-alex-look-here-caudano-torino-6-8-a.html

Martini has a double meaning on the strainer I suppose. To make one you need: Cocktail shaker, ice, gin (or vodka), dry VERMOUTH, cocktail STRAINER, martini glass, olive or lemon twist.

Wikipedia says: "Noël Coward suggested that a perfect martini should be made by "filling a glass with gin then waving it in the general direction of Italy" (which along with France is a major producer of vermouth)."

What Wiki misses here is that Noël mentions Italy because they had been making a vermouth since 1863 in a vermouth bottling plant in Pessione in the area around Torino (Piemonte) . The firm that made it was also called "Martini" = Martini & Rossi Distilleria Nazionale di Spirito di Vino, in Turin. This was the vermouth that Noël might well have been hinting at and waving towards Torino in the quote above.

"Since the earliest days, Martini have marketed their products aggressively," and there are other examples made at C. Caudano with the Martini trademark. I have seen recently an olive for on ebay.

I think this one may go back to the thirties, but I am not sure.

I'd be pleased to hear if anyone can give me more information about Caudano and Martini e Rossi.

For an interesting martini variation for the Fourth called the Aviation check out this blog: http://astripedsailorshirt.blogspot.com.au/2012/06/rimbocca-please-aviation.html
It's in English further down the page!