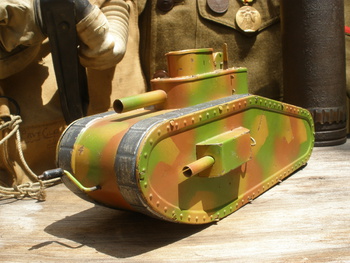 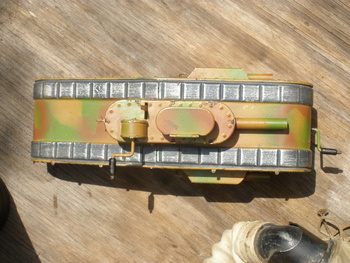 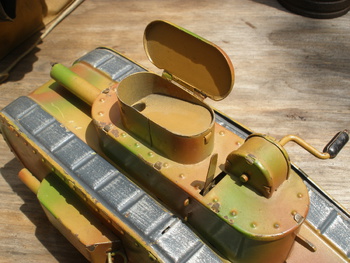 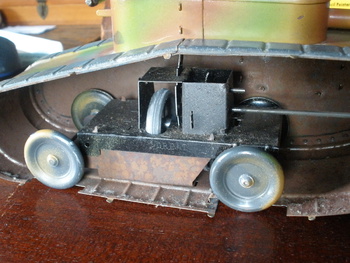 I scored this fantastic Hausser (Yes, THAT Hausser) tank in a German auction. This lovely piece is 10" long (plus crank) It has unique, beautiful hand painted camouflage (airbrushed against a rough card or paper). Each side mounted sponson gun has a spring so that it can shoot peas, though the gun on top has it's own little surprise. You load the top hatch full of peas/bbs/ball bearings and when the crank is turned a trap door allows a pea to drop into the barrel while the crank is also pulling back a spring. After the trap door closes, the spring releases, propelling the projectile! It'll shoot as fast as you crank it!

The motor (picture 4) was a bit of a mystery to me. I was under the impression that it wasn't working when I first received it. I took the side off to see what was going on in there and I found an unexpected design. In order to get it going, you need to depress the small lever next to the top crank (picture 3, vertical line next to flywheel in picture 4), then the front crank can be pushed into the tank (horizontal line in picture 4) which connects directly to the flywheel's axle, at which point you can crank it to get it moving. After you have spun the flywheel up to speed, then you pull the top lever back up which pulls the front drive wheels into contact with the spinning flywheel gears. Only after all that does the tank's wheels actually turn!!!

This is a beautiful early piece from a very well known company, which I didn't even know until after I had done some research. It came in a lot of tanks, and believe it or not this wasn't the main one I was after!

Now I just need some composition soldiers to go with it :)