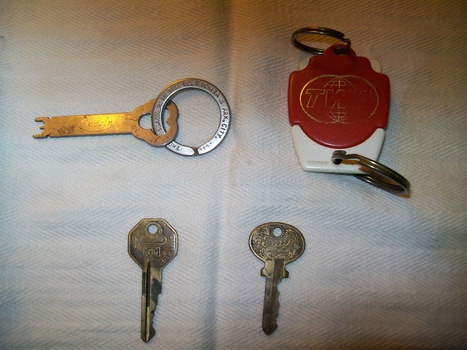 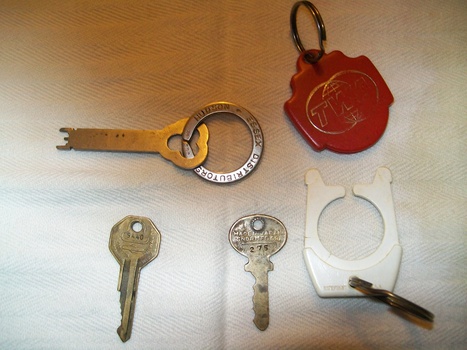 Some items I bought at a garage sale in the past. The top left key is interesting because it has "Lincoln" in script on it. I don't know if this denotes the auto or not, but maybe someone out there will supply that info. I believe this to be from the 1920's.
The top right key ring is a plastic TWA model made by Ritepoint, U.S.A. I suppose that it was for luggage keys to be attached to it.
The bottom left brass key is an earlier GM with "Your Key To Grater Value" on the GM face and "E & Stratton Corporation", "Milwaukie Wis. U.S.A." on the other side.
The right brass key is marked "Fulje"? on one side and "Made in Japan", "SNDRMFG CO." on the back. Someone once told me that items from Japan could be dated by the "Made in Japan' logo but I don't know what that is. The key has the appearance of something with age to it.
The key ring on the Lincoln key reads "The Mosbacher Motr Co. Wichita & ark. City" with the other side reading "HUDSON - ESSEX DISTRIBUTORS".
These actually were part of a package deal that I paid 50 cents for.