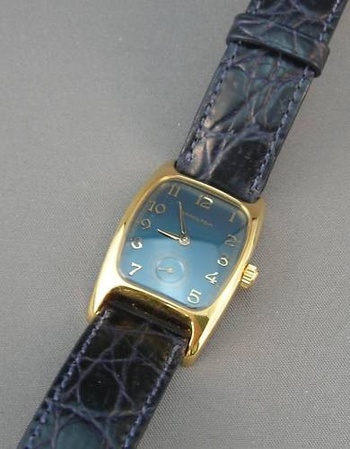 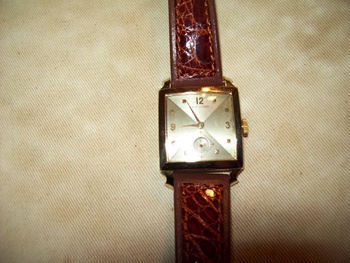 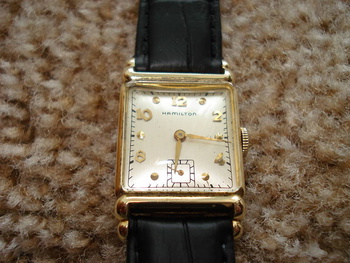 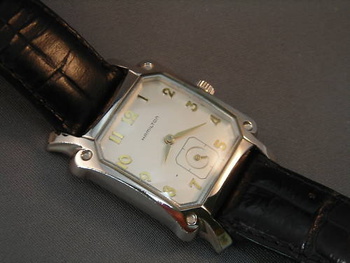 I love the distinctive look of the Boulton blue; one day I'd love to get the contemporary Boulton large, as this model is one of the top sellers to this day.
The Blair is a wonderful design issued as Hamilton was nearing the end of its greatest period of creativity; check out the way the dial is divided into quadrants via two intersecting lines shaped like an x. See also the subtlety of its graceful lugs. This watch was not working when I purchased it on EBay; thanks to a wonderful local jeweler, Schooley's of Ithaca, NY, which replaced the mainspring and had it oiled and cleaned and fitted with a "bad" (as in good) alligator band, the Blair makes a serious statement. It is the crown jewel of my watch collection.
The Ashley is special to me because it was the first Hamilton I ever purchased, 20 years after first discovering Hamilton. Check out the lugs on this baby as well as the pearlized dial. When I became an avid watcher of the excellent AMC TV series "Mad Men," that covers an advertising agency and its employees/owners in the 1960s--the era of my childhood and adolescence--my lifelong appreciation for vintage stuff peaked.

What did it for me was seeing Ken Cosgrove, a character on the show, awarded a Hamilton Ventura by a company for whom the fictional Sterling Cooper agency did ad work. Then I saw the lead character, Don Draper, wearing what I'm fairly sure was a Hamilton Piping Rock in a slightly blurred close up in an episode from the first season. So I went on the hunt for Hamiltons online and found a great resource in EBay, eventually finding the Ashley at a ridiculously affordable price.

Then there is the Lloyd. I love the shape of this watch, with its notched edges and oyster colored dial. It is my second-favorite Hamilton. It is a stylized kind of tank watch, at least in my opinion.
The tank style is my favorite; it was what sold me on that Hamilton I saw in San Francisco two decades ago. I had never seen a watch of that sort up to that time. One half of my collection are tank watches. Also, I love the sub-second at six. The first watch I bought with the sub-second at 6 was a contemporary Kenneth Cole KS 1025, a beautiful large but not massive tank with a copper bezel and arabic numbers, a few months before purchasing the Ashley.
I'd love to own a reissue Ventura (as opposed to an original, as I have read on this site about the problems these and other first-generaton battery watches made by Hamilton have had) with a black and gold band (comparable to the black and old gold colors of my fraternity, Alpha Phi Alpha), a reissue Piping Rock and a large Boulton. Then maybe I can call it a day for collecting Hamiltons.

Hamilton and Illinois Wristwatches
See all