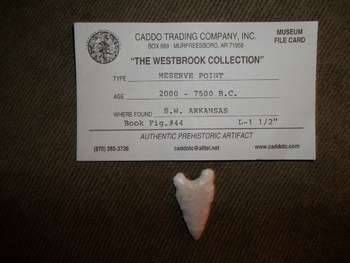 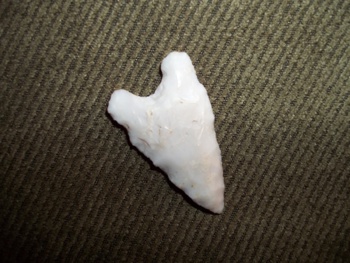 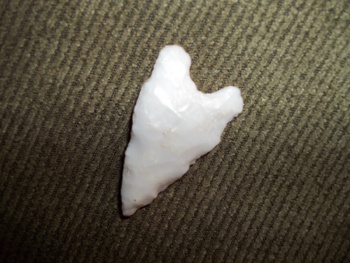 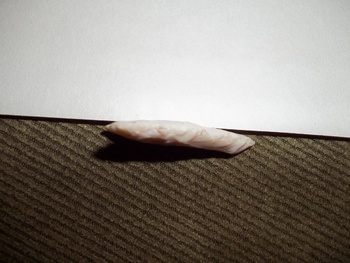 I have had this for a couple years now. It was found in Southwest Arkansas and I have a file card from the Caddo Trading Company that came with it. White Chert, a nice specimen and is mostly all white with some shading and if you hold it to the light you can see through the edges. I used to have a whole box of arrowheads, my father and I would go out to different places in Ohio and look for them and I had the best time, out there digging in the dirt with my father. I myself know nothing about arrowheads or points, but I did keep the ones I found in all kinds of colors and sizes. I put them in a box and they stayed in my bedroom closet for years. When I married, I left the box at my family home where they stayed until until my son found the box there when he was young. He played with them and most were lost in the back yard. The rest he still has, he loves collecting them now. When we are all back home at the family house, he will go out in the back yard and dig around hoping to find another one that he lost out there when he was little. He is in the military and is gone most of the time, so those moments when we can all be "home" are few and far between. It is nice for the times I can look out the back window and see my son poking around in the back yard, it brings back memories of him as a child playing with those arrow heads back there.

The last picture is of the point on it's side so you can see how thin it is. Hope you like it :)