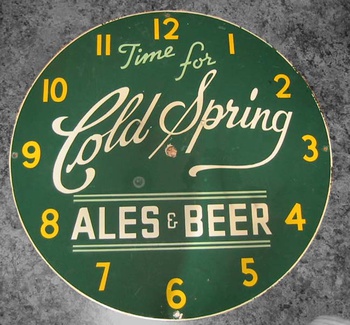 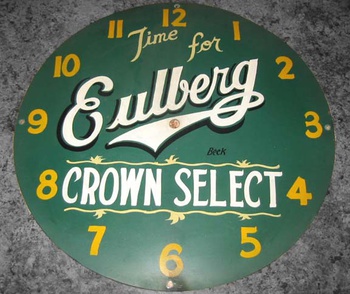 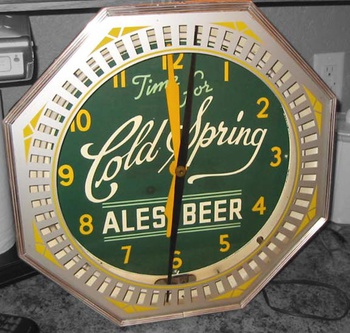 This neon spinner clock tells an interesting story, all detailed in pencil and tape on the reverse side. Seems that the original owner of this clock, the Cold Spring Brewery in Lawrence, Ma. (yes, there IS another Cold Spring brewery here in Minnesota, but they've never brewed ales. Well,not in the 50's anyway) installed a new motor in 1951. The installer recorded this info in pencil on the back. I believe the Eulberg Brewery bought the clocks after Cold Spring closed.

Wanting to save money, they hired a local signpainter (Beck Signs, which still exists in Oshkosh) to utilize the reverse side of the clock faces to make them Eulberg clocks...ingenious! They matched the color scheme quite well too. I have a Berlin (WI.) sign that yielded 2 signs similar to this. They placed a cardboard insert over their old logo to update the logo and brand.

After prohibition,Eulberg resumed brewing in 1933, its most famous beer being "Crown Select." The brewery was sold only 11 years later, in 1944, to two gentlemen from Waukesha named Lawrence and Alvin Bardin. In 1958, Alvin and Lawrence closed down the brewery in Portage and moved the brand to a contract brewery in Waukesha. In 1960 they ceased selling beer under the Eulberg name. The old Haertel/City/Eulberg brewery no longer exists; in its place is the Portage Chamber of Commerce building.