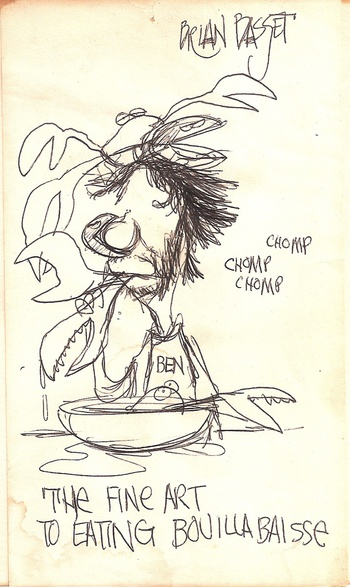 I read on BoingBoing the other day that cartoonist Brian Basset is selling an original Sunday comics panel of Calvin and Hobbes, given to Basset by Bill Watterson, Calvin's creator. Here's a link to the article:
http://boingboing.net/2012/11/09/calvin-and-hobbes-original-art.html

Other than being a huge Calvin and Hobbes fan, my connection to all this is minimal, but I do have a sketch of me that Basset drew in the late 1970s, probably around 1979. We used to eat at a little cafe in Seattle called Cafe Sabika up on Capital Hill. For some reason our paths crossed frequently for a year or two. Since we both enjoyed sitting at the counter, we'd talk about this and that. A few times, Basset sketched me in the act of eating, which is apparently a sight to behold (i.e., I'm a slob).

Fun fact: once I asked the owner/chef for the secret of his cream of broccoli soup, which was amazing. He looked around to make sure no one was within earshot and whispered "pork stock."