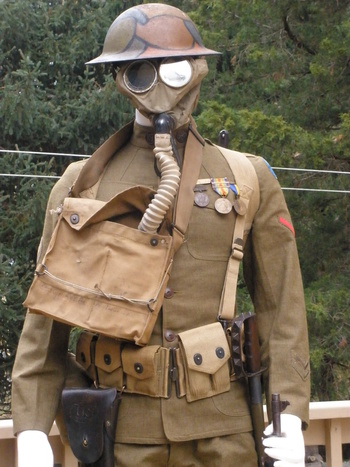 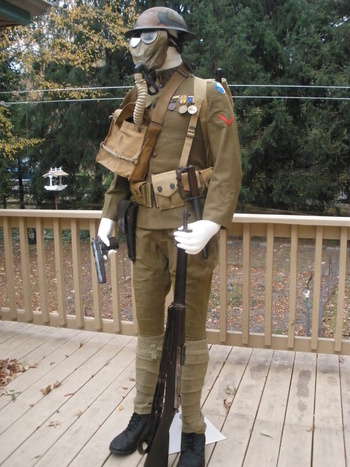 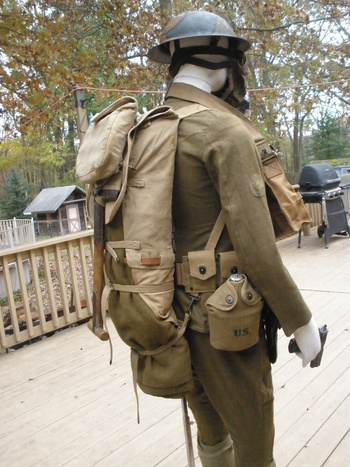 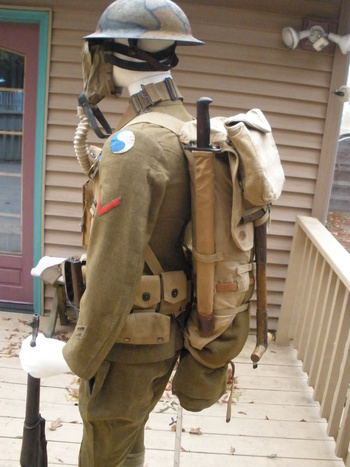 I wanted very much to wear this rig in a parade tomorrow (November 11th 2012), but the parade was moved to Monday and I couldn't get out of work. Lucky for me, I was able to pick up a really nice pose-able mannequin last night so I can finally display my collection the way it should be!

There are only a few inconsequential non-period replacements show here (replacements due to rarity or expense, but they look great!), but all major components are period ordinal (except for the boots). Kudos, If you can guess what isn't real (there are 5 things).

I was really happy with my belt rig, it is a 9 pocket mounted cartridge belt, so I added a .45 magazine pouch and a holster to it for fun. Also attached is a 1917 trench knife, a canteen, and a medical pouch.

The pack includes the meat can pouch (which holds my mess kit and utensils), pack tail extension, entrenching-tool with cover, and Springfield bayonet with scabbard.

If you can't see in the pictures, I finished replacing the missing collar discs on my 29th division uniform. I found a USNG 114th regiment disc (belonging to the Nashville group I posted before), and a simple Infantry Company C disc to match the patina of the 114th disc.

I should have taken off the Victory medals to give it a more correct wartime vibe, but I think it looks nice all the same.