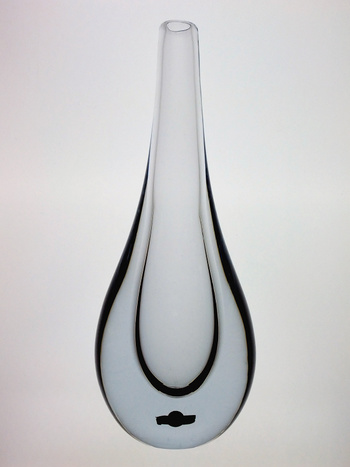 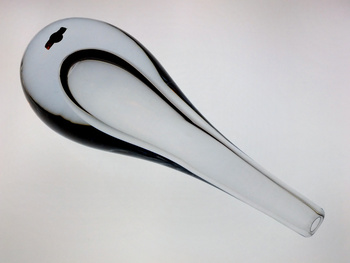 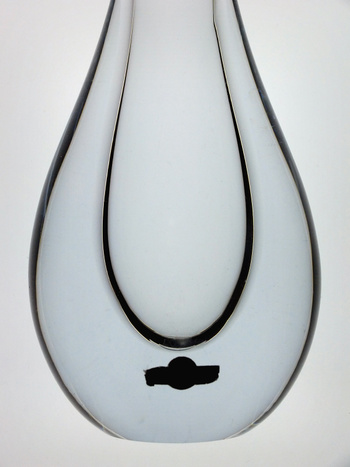 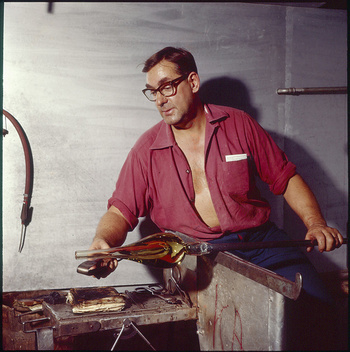 This 9 3/4" tall and 3 3/4" wide drop vase from Strombergshyttan I got cheap. 35 USD, together with an ash tray in colored sommerso underlay, should be a good price for the buyer! Personally I think Stromberg glass are undervalued in Sweden. Outside Sweden seems people better understand its value. But I think this will change over time. Strombergshyttan has an exciting development of the design from the 1950s to the 1970s, that I believe will become popular the more people discovers it.

Unfortunately, they launched the glass too bad in the 1970s. It's probably one of several reasons that Strombergshyttan became insolvent, acquired by competitor Orrefors, closed 1979 and then quite forgotten by the Swedes who grew up in the 1970s and later. They are more familiar with Hoganas Keramik, which bought the premises from Orrefors and started selling pottery for a about 10-15 years. Also Studioglas Strombergshyttan, that started in the late 1980s in a local next to the old factory, is better known among the younger generation Swedes.

The pure drop design in this B 818 model stands for Gunnar Nylund in the late 1950s. It was produced in at least 2 sizes (also a lower 7 1/4") and probably with colored underlay as alternative. Other models with similar shape is B 930 (longer neck), B 831 (longer neck and special colored pattern) and B 817 (shorter neck). Sometimes you se Gerda Stromberg for these models from the 1950's but that is not so true. In that time Asta Stromberg stood beside Gunnar Nylund and she began to draw glass even before Nylund came to Strombergshyttan. Asta has designed more models than you might think, and even sooner than many think. But this drop vase is a model by Gunnar Nylund.

The last picture here has been taken by my father, Putte Bergqvist, with his Zeiss Ikoflex 6x6 and flash units (the camera still works great) . Masterblower Kjell Andersson has just drove out the narrow neck of the vase, and the picture was taken around 1958 at Strombergshyttan. I'm glad that my father took pictures from the production, that we now can watch about 55 years later. The film he used was Agfachrome and it seems to have done well from degradation and destruction over the years.