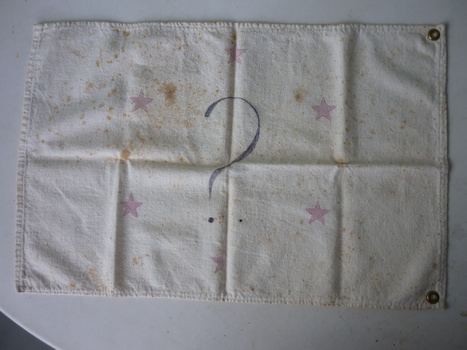 When I moved to "Statia", St. Eustatius, Neth. Antilles ('79), I soon found out that there was no island flag. I decided that there should be a contest for a design for our flag. After studying the history, came up with my design (above). I approached people in gov't. with the idea & showed them my entry & even pledged 200 guilders to the winner with other businesses(all 4) & individuals also pledged. I didn't win.
My entry was based on the facts that the island had surrendered 22 times without firing a shot so the field should be white, right. There are 5 1/2 islands in the Neth. Ant., so 5 1/2 red stars (St. Maarten is half dutch & half French. Since when anybody traveled & the name St. Eustatius can up, people would always say,"St. who?" or "St. what?" so the question mark (blue) is self-explainatory. Unreasonably, they chose a diff. design!
Actually it surrendered 23 times, but that's another story.