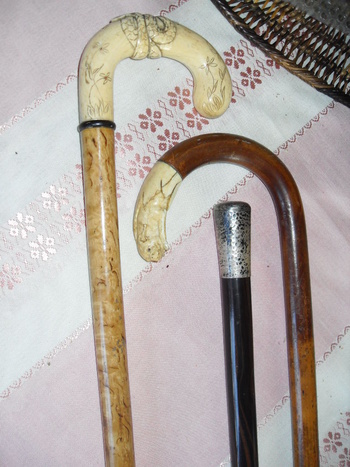 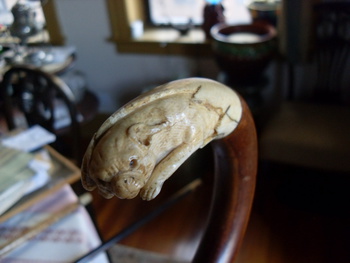 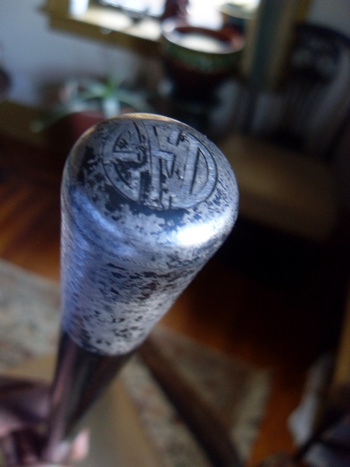 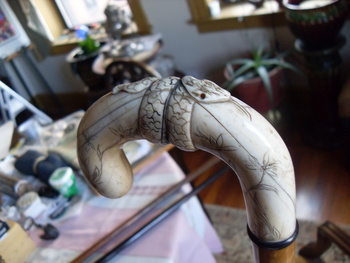 There are three antique 18th and 19th century gentleman walking canes.
Each of these were acquired at a local thrift store located in NYC's South Bronx distrit.

The first is a very nice ivory cane ( circa 18th century) of English bull dog laying down and resting. The ivory hook handle is 3". It depicts in very nice detail, a bull dog resting. The patina is rich and also intricately etched. The shaft, I believe is malacca. The overall length is 35" and the condition is very good.

As you can see, the second cane ( circa 19th century) has a silver engraved (EFD) handle is quite tall and slightly rounded top. The hand comfortably wraps around the handle.
The rounded-top piece is securely attached to the redwood shaft.
The top part is doubly secured to the cane with a single iron rivet.
It measures 35 1/2 inches tall.

The third cane is a special ivory scrimshaw handle with a snake and flowers. The ivory hook handle is about 6 1/2 inches with beautiful patina circa late 19th century. The ivory-top piece is securely attached to the malacca shaft. The cane measures about 35 inches tall.

Although the first sticks were probably used to help one stand, they became both weapons and symbols of authority. The larger and stronger the man, the larger the stick. As centuries passed, man added stones, points and hatchets to the sticks, which then became weapons as well as walking aides. The most elaborate of sticks would belong to the chiefs of tribes. These were often elaborately carved with emblems pertaining to the tribe.

In ancient Egypt, a stick was an object of prime importance. But while everyone had one, they varied by the person's occupation. A shepherd's staff was different from a merchant's, whose was different from a priest's or Pharaoh's. The stick remained with a person even in death, when it was placed in the coffin beside the mummy to protect the deceased on his travels.

The middle ages were dominated by the church, and this showed in the design of the walking sticks. The decorations were crosses and bishop's crosiers. Some even contained hiding places for money, precious stones and secret weapons.

European kings used canes or sticks as a symbol of authority. Many monarchs, such as Henry VIII and Charles I have their hands resting on sticks in their portraits. Louis XIV 'wore' his canes, and the court followed suit. (Although they could not be worn to court in the presence of the king.) The knobs and handles of many royal sticks were embellished with precious jewels.

Once the industrial revolution came about in the 19th century, canes were manufactured in mass by the hundreds of thousands. Stores carried specialty canes as well, some even designed by the leading silversmiths of the day.

The decorative sticks we see today in collections are mostly from the 19th century and up to about 1920. These were mainly fashion accessories and came in a variety of materials. Handles could be silver, ivory, porcelain, wooden, or glass. Silver was popular, and ranged from simple round knobs to elaborate animal figures. Ivory was also popular, and like silver, came in a variety of subjects. There were animals, flowers, vegetables and even human figures for handles. Porcelain handles were made mainly from molds. Wood handles were carved by hand, sometimes by shepherds and prisoners of war. 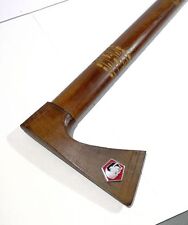 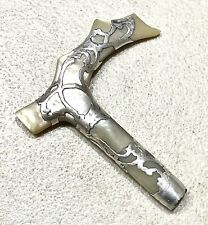 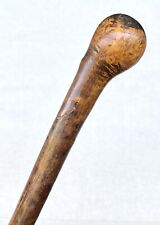