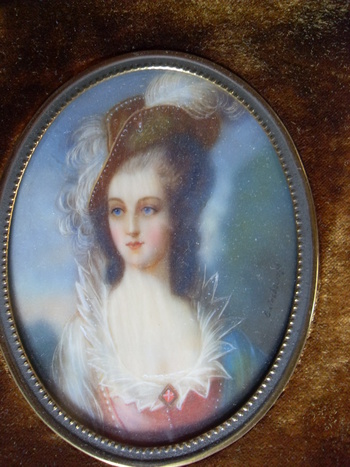 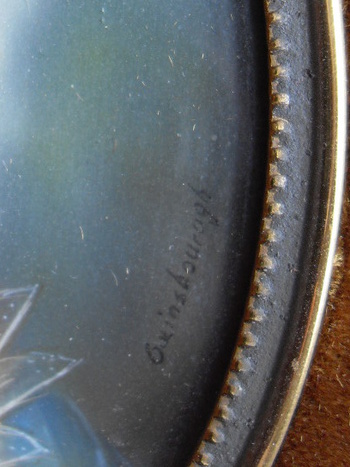 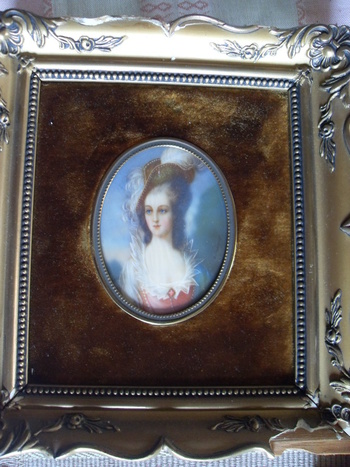 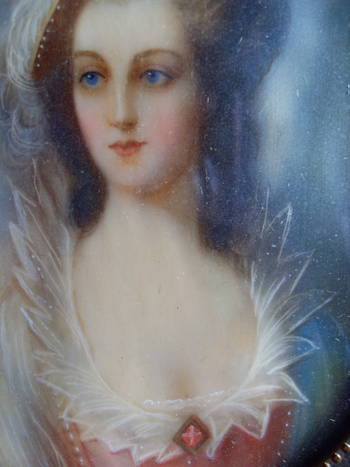 This oval miniature portrait measures 3 1/2 x 2 3/4 inches. The painting is watercolor on paper and covered by a concaved glass. It has a nice miniature Rococo Frames and is signed Gainsborough. The subject, unknown to me, is probably of a well known young woman of nobility snice he selected portraits of well-known or notorious clients in order to attract attention. But, her likeness is simular to Sarah Siddons, a famous Welsh actress born in Brecon, Mid Wales. She was arguably the best-known tragedienne of the eighteenth century and was most famous for her portrayal of the Shakespearean character Lady Macbeth.

Thomas Gainsborough FRSA (christened 14 May 1727 – 2 August 1788) was an English portrait and landscape painter. He was the youngest son of John Gainsborough, a weaver in Suffolk, and, in 1740, left home to study art in London with Hubert Gravelot, Francis Hayman, and William Hogarth. When he was 13 he impressed his father with his drawing skills and he was allowed to go to London to study art in 1740. In London he trained under engraver Hubert Gravelot but became associated with William Hogarth and his school. He assisted Francis Hayman in the decoration of the supper boxes at Vauxhall Gardens, and contributed to the decoration of what is now the Thomas Coram Foundation for Children. In 1746, Gainsborough married Margaret Burr, an illegitimate daughter of the Duke of Beaufort, who settled a £200 annuity on them. The artist's work, then mainly composed of landscape paintings, was not selling well. He returned to Sudbury in 1748–1749 and concentrated on painting portraits.

In 1752, he and his family, now including two daughters, moved to Ipswich. Commissions for personal portraits increased, but his clientele included mainly local merchants and squires. He had to borrow against his wife's annuity.
In 1759, Gainsborough and his family moved to Bath, living at number 17 The Circus. There, he studied portraits by van Dyck and was eventually able to attract a fashionable clientele. In 1761, he began to send work to the Society of Arts exhibition in London (now the Royal Society of Arts, of which he was one of the earliest members); and from 1769 he submitted works to the Royal Academy's annual exhibitions. He selected portraits of well-known or notorious clients in order to attract attention. The exhibitions helped him acquire a national reputation, and he was invited to become a founding member of the Royal Academy in 1769. His relationship with the academy was not an easy one and he stopped exhibiting his paintings in 1773.

In 1774, Gainsborough and his family moved to London to live in Schomberg House, Pall Mall.[1][3] In 1777, he again began to exhibit his paintings at the Royal Academy, including portraits of contemporary celebrities, such as the Duke and Duchess of Cumberland. Exhibitions of his work continued for the next six years.

In 1780, he painted the portraits of King George III and his queen and afterwards received many royal commissions. This gave him some influence with the Academy and allowed him to dictate the manner in which he wished his work to be exhibited. However, in 1783, he removed his paintings from the forthcoming exhibition and transferred them to Schomberg House.

In 1784, royal painter Allan Ramsay died and the King was obliged to give the job to Gainsborough's rival and Academy president, Joshua Reynolds. Gainsborough remained the Royal Family's favourite painter, however. At his own express wish, he was buried at St. Anne's Church, Kew, where the Family regularly worshipped.

In his later years, Gainsborough often painted relatively simple, ordinary landscapes. With Richard Wilson, he was one of the originators of the eighteenth-century British landscape school; though simultaneously, in conjunction with Sir Joshua Reynolds, he was the dominant British portraitist of the second half of the 18th century.

He died of cancer on 2 August 1788 at the age of 61 and is interred at St. Anne's Church, Kew, Surrey (located on Kew Green). He is buried next to Francis Bauer, the famous botanical illustrator

Portrait miniatures began to flourish in 16th century Europe and the art was practiced during the 17th century and 18th century. They were especially valuable in introducing people to each other over distances; a nobleman proposing the marriage of his daughter might send a courier with her portrait to visit potential suitors. Soldiers and sailors might carry miniatures of their loved ones while traveling, or a wife might keep one of her husband while he was away.

The first miniaturists used watercolour to paint on stretched vellum. During the second half of the 17th century, vitreous enamel painted on copper became increasingly popular. In the 18th century, miniatures were painted with watercolour on ivory. As small in size as 40 mm × 30 mm, portrait miniatures were often used as personal mementos or as jewellry or snuff box covers.

From the mid-19th century, the development of daguerreotypes and photography contributed to the decline in popularity of the miniatures.