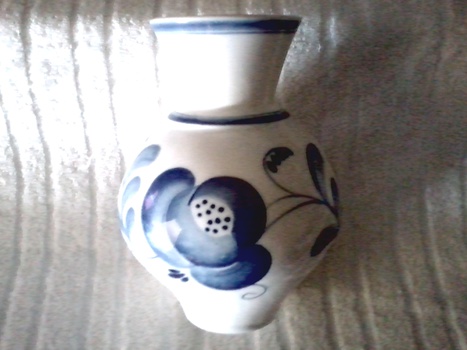 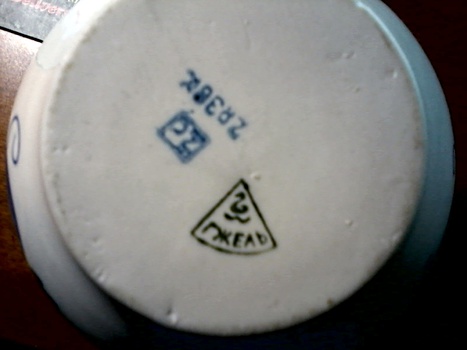 I found this nice little hand painted Delft style vase. It's 7" tall and 6 " across in the middle. It has a mark and numbers on the bottom, but I'll be darn if I can figure it out or even what the word in the "Swan" mark is suppose to be. The first letter is a mystery. the K E A is clear but the last letter is also hard to figure out. Anybody know this mark or factory ? Thanks -Mike-

Gzhel is a style of ceramics which takes its name from the village of Gzhel Russia and surrounding areas, where it has been produced since 1802.
In the 1830s, the Gzhel potters developed a faience, or white earthenware, of a quality that rivaled the creamware being produced in England at the time. They followed the development of faience with the acquisition of porcelain. Porcelain is fired to a similar temperature as stoneware, but unlike stoneware it becomes a translucent white and as such is highly desirable. The making of porcelain had been a secret heavily guarded by China with only finished products being exported. When Russia was able to produce their own porcelain, it undercut the high cost of imports from China or Western European producers. Although there have been several periods of disruption in pottery production at Gzhel, quality pottery is once again being produced in both the recognizable blue on white design as well as the more colorful Maiolica ware.