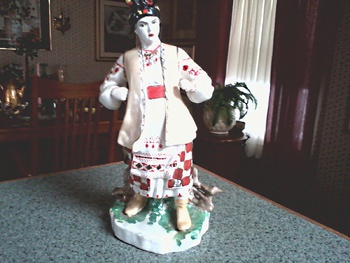 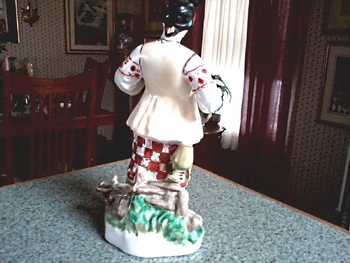 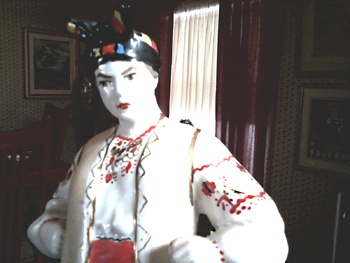 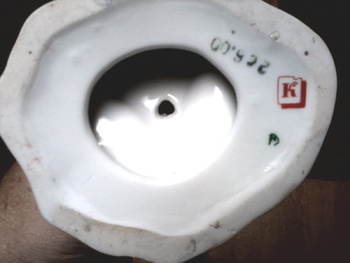 Found another nice piece of Russian porcelain at SA today. It's from the Kiev Experimental Arts Ceramic Factory. The figure is "Odarka" a cossack villaness from a 19th century comic opera by Gulak-Artemovskiy . Probably dates from the 60's-70's. It has the large red "K" mark but does not say made in the USSR as some do. A nice companion for my "Margurerite" figure I posted a few month ago. I was surprised at the prices. This is worth considerably more than my three dollar investment... Score again ! -Mike-

From Collect Russia .com
Odarka,a dramatic and colorful porcelain figurine by the Kiev Experimental Ceramic Factory of the Cossack villianess (a nagging wife!) from Zaporozhez Across the Danube River, the 19th C Ukrainian comic opera.
4" x 3 5/8" x 9 3/8" (100 x 92 x 237mm). Incredible detail from her clothing down to a water jug parked on top of a fence post behind her.

The opera by Semen Gulak-Artemovskiy dates to 1864 and relates the story of a poor but clever fellow's life dealing with a complaining wife and Turkish overlords (one wonders: which was worse?).

Some words about history of Kyiv (Kiev) porcelain
courtesy of "Art Salon Sovfarfor" http://en.art.sovfarfor.com/
The Kyiv (Kiev) Experimental Art Ceramics Factory was built in 1924 on the basis of workshop, which manufactured ceramic paints and decal.
After World War II the enterprise was expanded. There was founded new experimental workshop, which produced decorative articles.
Big art workshop, which was one of the best in Soviet Union, also existed at the factory. Samples of ceramic articles were developed there, then they were used on the other porcelain factories in Ukraine.
Many famous sculptors, such as Shcheherbina V. I., Rapai O. P., Zhnikrup O. L., painters Sarapova S. M., foremen of folk art Vera Pavlenko, Marfa Tymchenko and Hanna Pavlenko-Chernychenko, worked in this art workshop. Their articles often exhibited on the international exhibitions and fairs.