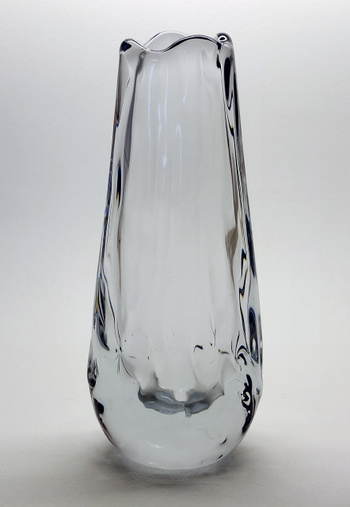 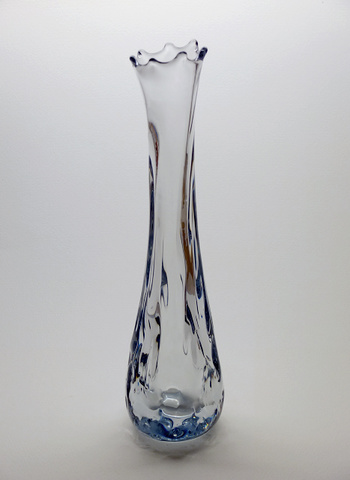 Two interesting models by Gunnar Nylund, B740 and B741. Blown and handmade in a special technique, resulting in soft bumps/roughness all over the glass surface. Height 210 mm (B740) and 295 mm (B741). I have seen another vase, like B740 but 350mm high, in similar technique and signed "Strömbergshyttan G Nylund 182A", in an antique store, probably a unique experiment item. But these two were ordinary production, I still think they are quite rare.

Nylund designed many models during his first period at Strömbergshyttan 1952-56. About 200-300 vase models I think. All were not launched under his contracted time until turn of the year 1956-57, but also in the following years. That conclusion I draw from the documents that are saved and which I recently found among the material after my father. I also concluded that some models in the following years, designed by Asta Stromberg, was developed on the basis of Nylunds glass models. She made changes, removed or added features, and thus developed the design a step further. Strömbergshyttan could do so pursuant to contracts written before, but it would also consult Gunnar Nylund or representative of his design company, Gunnar Nylund AB, if they did so. If Nylund would get commission for these altered models or not, was not in the contract. But in 1966-67, when the agreed commission time in 10 years expired, Nylund wanted to be compensated for the models of his basic design and changed by Strömbergshyttan. A settlement where Nylund was compensated for this was made in 1967.

As I interpret the documents, Nylund was not involved as a designer from 1957 to 1966. Both parties announced the termination of the contract before the end of the year 1956-57. In a note by Strömbergshyttans lawyer in 1967, is also said that Nylund was not employed after 1956. In addition, there is information in the settlement of 1967 which suggests that it was indeed so. But from 1967 to some years into the 1970s Nylund drew glass for Strömbergshyttan again, now on freelance. This shows the saved drawing material. In the saved folder with drawings by Gunnar Nylund I found after my father, there were any dated between the years 1957-66, which also gives strength to my firm belief that Nylund was not engaged as designer for Strömbergshyttan between these years. If anyone can show facts which indicate anything else, please let me see them.