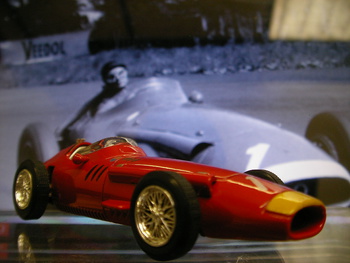 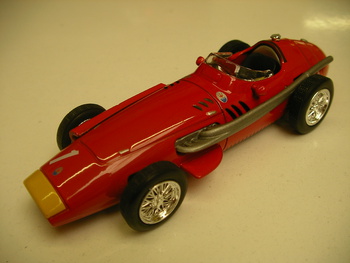 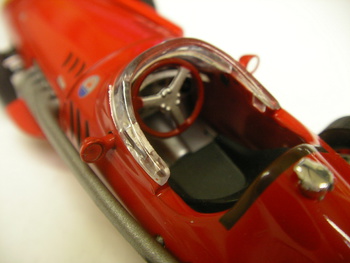 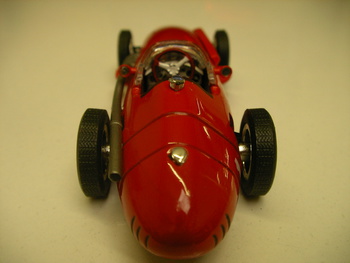 This is a 1:43 diecast model of the championship winning car for 'both' the 5th & the 8th FIA Formula One World Championship season held in the year 1954 and 1957 respectively driven by Argentinean racing driver, Juan Manuel Fangio (pictured).

The 250F principally used the SSG 220 bhp (@ 7400 rpm) 2.5-litre Maserati A6 straight-six engine, ribbed 13.4" drum brakes, wishbone independent front suspension and a De Dion tube axle. The major innovation for Maserati was that they followed the practice of Ferrari and placed the De Dion tube in front of the transaxle. The goal was to move a significant amount of weight ahead of the rear axle improving weight distribution and reducing the polar moment of inertia. The transmission offered four forward gears plus reverse. The aluminum bodywork with the fuel tank forming the tail of the car and had a capacity of 200 liters. The cockpit was quite generous and offered an upright seating position with plenty of elbow room but the dash was to close for the straight armed driving style. The pedals were arrayed in what was then known as the Continental fashion with the accelerator in the center with the brake to the right and the clutch on the left.