This article details the process of glass enameling and describes a particular punch bowl set (pictured). It originally appeared in the September 1939 issue of American Collector magazine, a publication which ran from 1933-1948 and served antique collectors and dealers.

Overlay or cased glass was a product of the 19th Century. But, although different in technique, it stemmed back, artistically at least, to the colorful enameled glass of the Romans which they first fashioned some two thousand years ago.

This process the Arabs later perfected and the Syrian glass of Damascus and Aleppo presently found its way to Europe where Venetian and, later, Bohemian glassmakers also learned the process. By the 15th and 16th Centuries the latter were fashioning such elaborate and beautiful pieces as the Reichsadlerhumpen, a large beaker enameled with the double-headed eagle of the Holy Roman Empire and the coats of arms of its dependencies. Of Bohemian design and workmanship, it marked the high point in European glass enameling. A fine example, dated 1587, is owned by the Metropolitan Museum of Art and was on display during their exhibition of 5,000 years of glass, held in the fall of 1936.

Glass enameling, however, involved not only the use of many colors but several processes of execution. So by 1820, the Bohemians found a relatively simple way to produce a decorative and pleasing effect by substituting a single color for the many. The process was quite different. But briefly, the steps in its making were as follows: 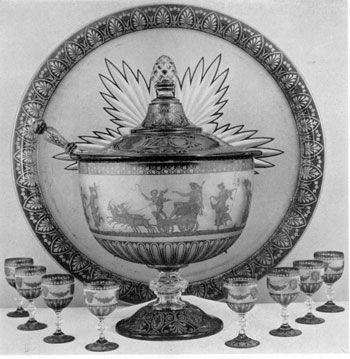 An Unusual Punch Bowl Set: Probably made in France about 1860, the design executed in blue over clear glass follows closely the classic designs of the earlier Adam period.

Over clear or colored glass a contrasting shell was applied while the whole was white hot. Then the glass was annealed, after which it went through a grinding and polishing process whereby a pattern was cut through the outer shell thus revealing the contrasting color beneath. Ruby red, blue, green, canary, and sometimes clear with opaque overlay were used. This lent itself readily to either simple designs or to such elaborate cutting as may be observed in the punch set illustrated.

The making of overlay glass was not long confined to Bohemia but soon spread to France, England, and America. By 1840 it had supplanted the earlier and richly cut clear glass of Waterford, Bristol, and other English centers. It had color, warmth, was homey and comfortable to live with in its simpler forms, or proudly handsome when it went back to the classic in its more pretentious pieces. In short, its appeal to Victorian tastes was obvious.

American glass-houses made a wide variety of it. Lamps of overlay glass were probably most popular but there were other forms, such as vases, water bottles, and various ornamental pieces. Also houses built between 1860 and 1880 frequently used this two-color glass for the narrow windows on each side and above the main door.

The elaborate punch set shown here was found in New York but was made about seventy-five years ago at either the Baccarat or St. Louis glassworks in France. It is nothing to balance lightly on one hand. The clear glass tray with cut-glass star measures 27 1/2 inches and weighs 37 pounds; the punch bowl which is 18 1/2 inches in diameter weighs 19 pounds and its cover 9 3/4 pounds. All of which, not counting the fourteen glasses left out of an original twenty-four, brings the whole close to 56 pounds.

Although its proportions and size suggest the easy hospitality of the Victorian age and its New York custom of New Year calls, the decorative detail is in the classic manner. The color employed in the overlay is indigo blue. This shows through the Bacchante design that decorates punch bowl and goblets and the border of the tray.

Other details showing nicety of workmanship are the cut pineapple finial of the cover, the ladle with silver bowl and glass handle, and the beautifully formed stems of clear glass in the goblets. In fact, the whole set is a most skillful combination of overlay and clear glass cutting. It emphasizes the fact that French craftsmen could and did bend their skill to other objects than the exquisite stained glass windows for which they are justly famous.