Back before radio, pop music existed—but if you didn’t own a phonograph, you had to sit at the piano and perform it yourself. Just like pop music today, these sheet-music songs reveal much about the zeitgeist of their era. 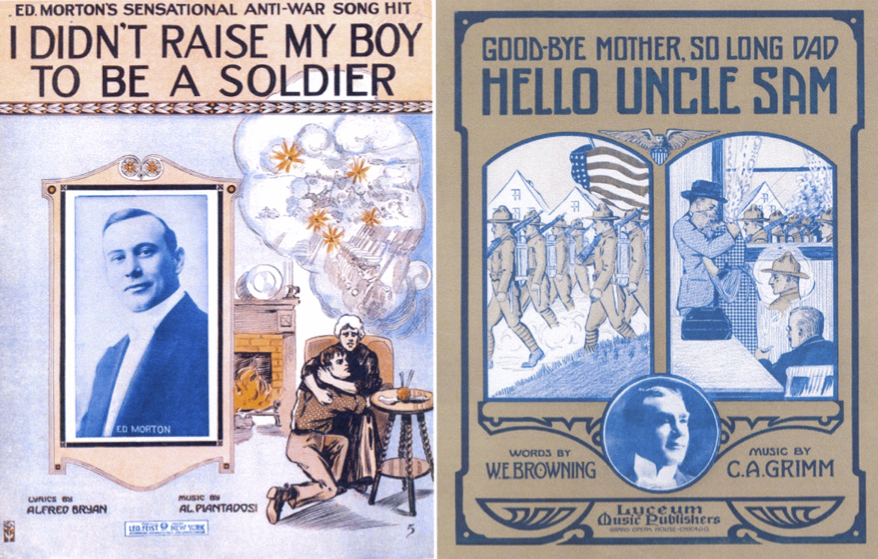 It turns out, Americans have a history of ambivalence when it comes to fighting abroad. According to this sheet music—posted to Show & Tell by Hoopkrin, a retired school administrator in Long Island, New York—anti-war sentiment can be traced back to the early days before the U.S. entered World War I, when America had Isolationist tendencies.

Check out Ed Morton’s “Sensational Anti-War Song Hit,” “I Didn’t Raise My Boy to Be a Soldier” with the dramatic image of a mother holding her son tightly, thoughts of explosions and gunfire in a cloud behind her. The chorus goes:

I didn’t raise my boy to be a soldier,

I brought him up to be my pride and joy,

Who dares to put a musket on his shoulder,

To shoot some other mother’s darling boy?

As soon as the U.S. got involved with “The Great War” in 1917, though, the tide turned with catchy, pro-war tunes. A piece like “Good-Bye Mother, So Long Dad, Hello Uncle Sam” still seems to telegraph a sense of reluctant duty, whereas “If I Had a Son for Each Star in Old Glory (Uncle Sam, I’d Give Them All to You)” fully embraces patriotic fervor.

Hoopkin’s sheet music collection reveals how the reigning sentiment against the draft gradually faded. As mothers sent their sons off to fight the Germans, they did so with not just tears, but also a glowing air of pride.

Next week, we honor all those who have served our country on Veterans Day. This holiday began as Armistice Day in 1919, honoring the end of the Great War the year before, when a ceasefire between the Allies and the Germans went into effect on the eleventh hour of the eleventh day of the eleventh month.