This article discusses the animals featured on Thomas B. Atterbury’s glassware, describing the pictured designs and quoting his patents. It originally appeared in the October 1945 issue of American Collector magazine, a publication which ran from 1933-1948 and served antiques collectors and dealers.

While doing research work in the Pittsburgh, Pennsylvania, area in 1933, it was my privilege to interview a large number of officials connected with glass companies, as well as actual glassworkers. It was disappointing to find that most of the officers were primarily interested in what they could make money on tomorrow, rather than in the products their grandfathers or the former heads of their concerns manufactured. They cannot be blamed for their attitude, even though it was disheartening for the interviewer and tended to remove some of the romance associated with our old glass. 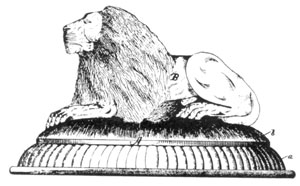 ILLUSTRATION I: Lion Covered Dish: The date of this patent, taken out by T. B. Atterbury was August 6, 1889.

It was largely through the men who worked in old-time factories that here and there a nugget could be gleaned. One man told me that he had been sent out to the Zoo to look over the animals and decide which ones might make suitable subjects for covered animal dishes. Having exhausted the domestic animals as models, new ideas were needed.

Apparently the tour of the Zoo bore fruit and we can now learn through reproductions of designs from patent files that Thomas B. Atterbury of Pittsburgh, Pennsylvania, was largely responsible for many interesting dishes collectors enjoy today. From the reproduction of these patented designs illustrated here, one will note that they were usually taken out on the “dish cover.”

In Illustration I will be seen the majestic Lion. Mr. Atterbury’s patents were executed, in several instances, on August 6, 1889. Space will not permit coverage of all the text of the specifications for the dishes, but an example will be liven here of the Lion dish, so that the reader may understand the mechanical procedure. It reads as follows: 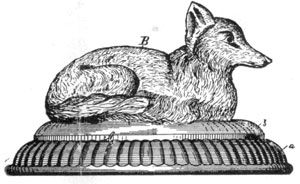 ILLUSTRATON II: The Fox Covered Dish: Also patented August 6, 1889, by Atterbury, in his specification he states that the top could be used with bases of several designs.

“To all whom it may concern: Be it known that I, Thomas B. Atterbury, a citizen of the United States, residing at Pittsburgh, a in the County of Allegheny and State of Pennsylvania, have invented and produced a new and original Design for Dish-Covers; and I do hereby declare the following to be a full, clear, and exact description of the same, reference being had to the accompanying drawing, forming a part thereof.

In the drawing I have shown a dish-cover in perspective having a lion thereon.

The cover, which is by preference elliptical and also of oval shape, has formed around its base a border, consisting of short upwardly-extending ribs or flutings, above which the top of the mound or oval portion is made in imitation of trampled grass or turf, and on which is a lion in an attitude of repose with the head raised.

A indicates the main body of the cover, which has the short longitudinal flutings or ribs, A extending around the base and the upper portion, B, roughened to represent long grass. On the top of the cover is formed the handle B, which represents a lion squatting or lying down with the head erect. What I claim is —

The design for a dish-cover, as shown and described, the same consisting of an oval or mound shaped cover A, having short longitudinal flutings or ribs extending around its base, above which it is made in representation of turf, the handle portion B representing a lion lying down the head erect.

ILLUSTRATION III: The Famous Atterbury Duck: The date of this patent is March 15, 1887 and its inventor referred to it as “in a sitting or crouching position.”

In testimony whereof I affix my signature in presence of two witnesses, Thomas B. Atterbury.”

In Illustration II will be noted a similar-shaped cover, showing a fox. This dish was also patented by T. B. Atterbury on August 6, 1889. In patenting the cover, the manufacturer of the dishes could use more than one style of base — so long as the cover fitted! In the text of the fox cover the patent reads, in part: “and having on the top thereof and covering the greater portion of the same a configuration of a fox.”

Probably the most famous of Mr. Atterbury’s covered dishes today is the so-called “Atterbury duck” (Illustration III). Collectors do not refer to “the duck dish,” but in this particular instance, it is always termed the “Atterbury duck.” The patent was taken out March 15, 1887.

Nothing is ever said about colors, but this particular dish was made in a beautiful shade of amethyst glass and examples fetch a high price today. It was also produced in milk-white, in opaque blue and in white with blue heads. This dish has been widely reproduced in milk-white and in various colors, as well as in combinations of colors. It is not difficult to tell the old from the new, if one concentrates on the details of the design. Many of the covered dishes were sold “Eyed or without” and the Atterbury duck is a shining example. It is difficult to find one with the original eyes today. 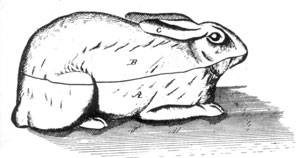 ILLUSTRATION IV: The Large Rabbit Dish: This the inventor called a tureen or dish in patent specifications dated March 9, 1886.

On March 9, 1886, Mr. Atterbury patented the large rabbit dish (Illustration IV). This is described by him as “a dish or tureen.” Collectors will discover them today in milk-white or in opaque blue, sometimes with red-inset eyes. Any other color would be a rarity.

A popular covered dish more Victorian in appearance than the others described is shown in Illustration V. Among collectors it is known as the “hand with dove” dish, but not so with Mr. Atterbury. His patent was taken out August 27, 1889, and is described as follows: 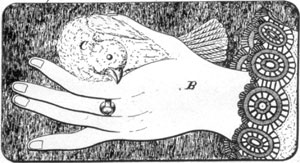 ILLUSTRATION V: Hand With Dove Dish: Atterbury described this as a dish cover in his patent dated August 27, 1889.

“The design for a dish-cover, the same consisting of a rectangular slab with slightly-rounded corners having the configuration of a hand holding a bird between the index-finger and the thumb extending over the same, said bird extending up above the hand and has its head turned toward the hand in the attitude of pecking the index-finger.”

Factually, the bird appears slightly sad at having been captured! The dish may be found with or without a colored stone of sorts, set in the ring on second finger of hand. Milk-white is the most common color of the cover, which rests on an “open-work” or lace-edged base. Any of the “hand with bird” dishes are difficult to find these days, because they have been so widely collected.

Among other Atterbury patents on covered dishes may be included one seldom seen, probably because it is not a pleasing design, which the description notes: “consists in the configuration of two or more fishes symmetrically arranged around a central portion, which extends above the fishes a little distance in the form of a truncated cone, having a shell on top thereof, which forms the handle of the dish-cover.” 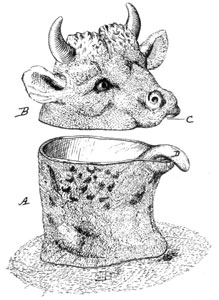 ILLUSTRATION VI: A Covered Mustard Cup: This was patented July 17, 1888 and the specifications describe it as the “head and neck of a bovine…the head being detached from the neck portion.”

Other animals include the cat; also “a pyramid of eggs, the handle portion of the cover representing a chicken which has partly broken its way out of its shell”; (this is a large dish, usually milk-white, with a lace-edged round base), and a novelty mustard cup (Illustration VI). The detail of this dish displays excellent workmanship. Usually it is seen in a distinctly opal-white, the tongue of the cow forming the handle for a mustard spoon. The patent was issued July 17, 1888.

Undoubtedly there are other Atterbury dishes. An upright owl, which I have found in opaque blue with red eyes; in milk-white with or without eyes and in opaque lavender, without eyes, appears to be from the hand of the same designer.