Be a Bombshell at the Beach, Go Vintage 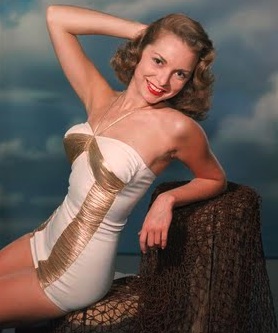 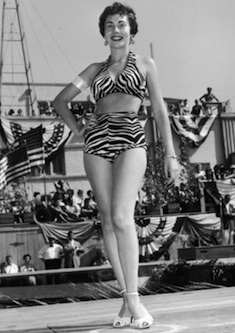 Good news: The hottest look on the beach this summer is vintage. Retro pin-up style swimsuits that cover more flesh and flatter the figure have been seen on everyone from Megan Fox, Ke$ha, and Taylor Swift to Lindsay Lohan, Meg Ryan, and Marisa Tomei.

At last, we can all breath a sigh of relief after sucking in our bellies for a decade. Remember ye old days of 2000? Some platinum-haired R&B singer named Sisqó proclaimed his obsession with thong underwear, and suddenly, it got much more difficult to find bikini bottoms that actually covered the bottom. Swimwear, particularly for women, had shrunk to the smallest possible piece of fabric that retailers could justify selling as clothing. 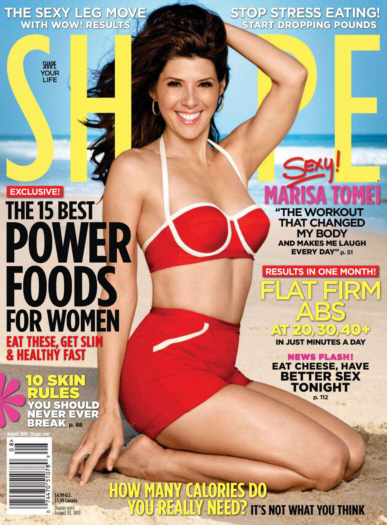 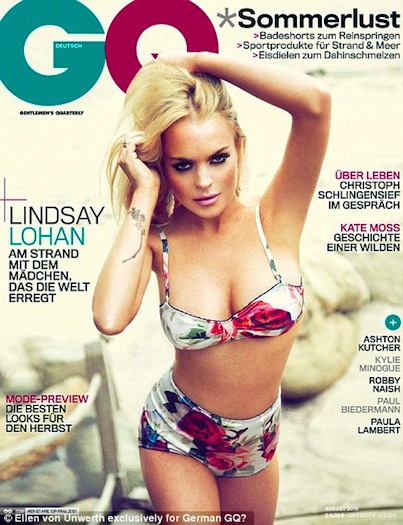 While it might seem like the near-naked state encouraged by “let it all hang out” bikinis promoted body acceptance, every year around March, magazines began to scream about getting “bikini ready” for the summer. Would it ever end? Who would save us?

Believe it or not: Miranda Hobbes. In 2008, Cynthia Nixon’s “Sex And The City” character appeared on the big screen in a stunning, red ruched one-piece swimsuit, with a halter strap and a sweetheart neckline, that hugged her curves and covered her bum. Women rushed to the store to snatch up the Mio swimsuit designed by Norma Kamali. 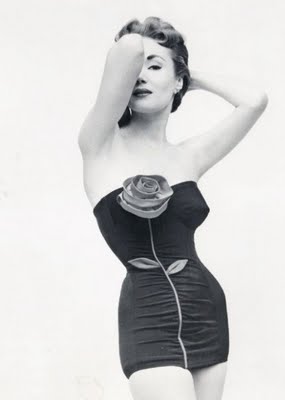 According to vintage swimsuit expert Pam Fierro, such ’50s styles are “a little more modest. For myself, I think it’s better suited to the body. You see a little less and your mind wanders a little more. A woman that has a bathing suit on that’s more in the retro style is, to me, sexier than the thongs and the strings, which don’t leave much to the imagination.”

It didn’t take long for the concept to snowball: What’s not to love about feeling sexy in a bathing suit without forsaking dessert and slaving away at the gym? Now, here in 2011, we see vintage-inspired swimsuits all over the runway, celebrated in museum exhibitions, written up in fashion blogs and newspapers, covering starlets on magazine covers, and offered at stores like Anthropologie and Nordstrom.

The hottest looks right now, according to Fierro, come right out of the old Hollywood glamour of the ’40s and ’50s, when pin-ups really took off. These are often referred to as pin-up or bombshell-style swimsuits because they have an extra dose of glitz, embellished with lace, sequins, or even rhinestones. This 1950s “Rose” swimsuit by Catalina, seen on a model above left, is the perfect example.

Many styles are inspired by looks worn by classic beauties like Liz Taylor, Marilyn Monroe, Jayne Mansfield, Janet Leigh (pictured in the 1940s, in Cole of California’s “Gilded Lily” swimsuit, top left), and Bettie Page. Of course, all these women had gorgeous hourglass figures, but the brilliant part about a vintage-style swimsuit is that you don’t have to.

The retro styles currently favored by everyone from 16-year-old girls to 60-year-old women are bikinis with high-waisted “granny panty” bottoms that hold the belly in, cute polka-dotted and striped prints, structured tops that give the illusion of pointy breasts, bandeau tops, halter tops, and the strategic use of ruching, shirring, and ruffles to hide soft spots and create curves. 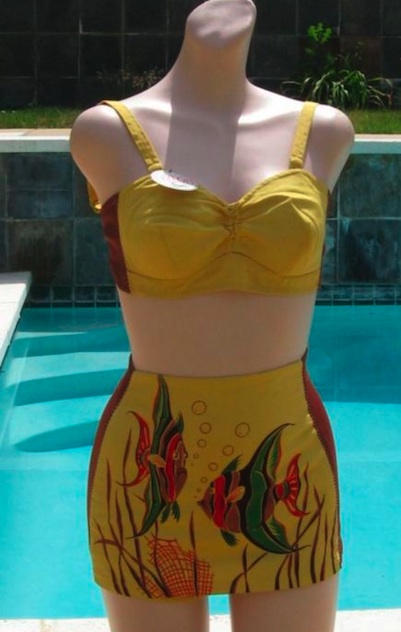 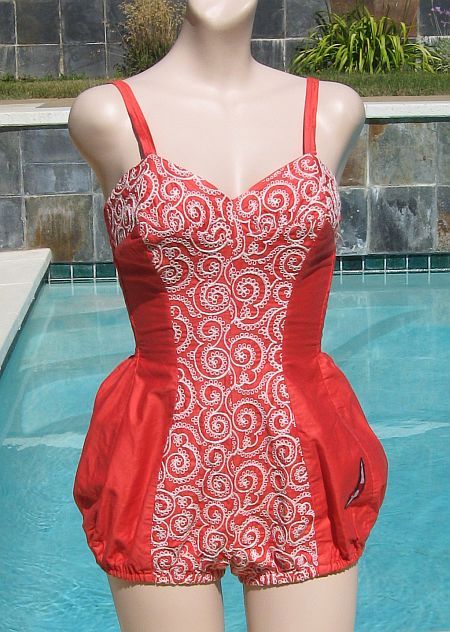 Fierro, who gave us a wonderful interview on the history of the swimsuit, says that if you want the vintage look, you might as well go for real vintage piece—like the ones at her online store, GlamourSurf, pictured above and below. Bathing suits from the ’40s and ’50s are made of fabrics like wool, silk, and nylon velvet. However, unlike bikinis and two-pieces purchased at the mall, many of these high-quality vintage pieces are rare. That means that you can’t mix a small top with a matching medium bottom, for example. Fierro assured me that if I looked hard enough, though, I could find a vintage swimsuit that fits a pear like me.

“In vintage swimwear, you’ll find techniques for shaping the figure that you won’t find in swimwear nowadays. For example, the elastic shirring around the back of a swimsuit is made so that it hugs your whole body frame, not just your back,” Fierro says. “Vintage swimsuits, especially ones from the ’50s, are very corset-like. They’re made with boning and zippers and elastic to help accentuate your assets and downplay other parts of your body that you’re maybe not so happy with. In contrast, a piece of Lycra spandex in a modern suit is going to have maybe four-way stretch and just meet the silhouette that you already have.” 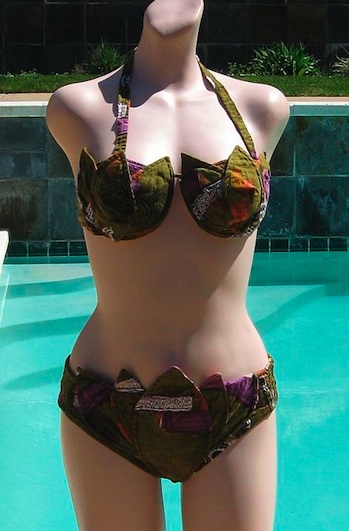 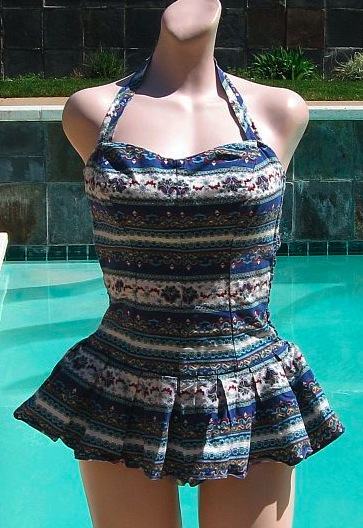 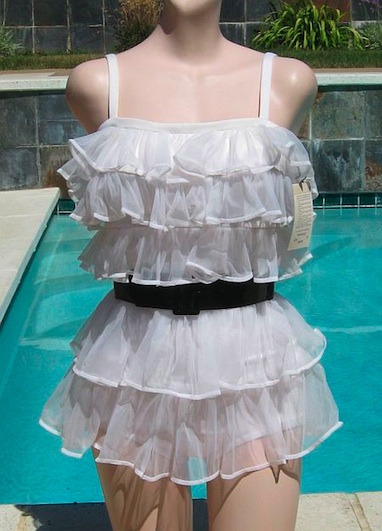 Fierro has unearthed many irresistible vintage pieces by classic swimsuit designers like Catalina, Jantzen, and Rudy Gernreich, the inventor of the first topless bikini. While vintage bathing suits typically cost three times as much as a high-quality bikini at the mall, Fierro’s finds, like her adorable Catalina two-pieces with hand-printed images of fish or palm trees on the “modesty panels,” are often one-of-a-kind.

You might think that these older suits made out of natural materials would be less durable in chlorinated pools and salty seas than modern-day ones, but not so, Fierro says. With vintage suits, she says, you just have to make sure to treat them right. 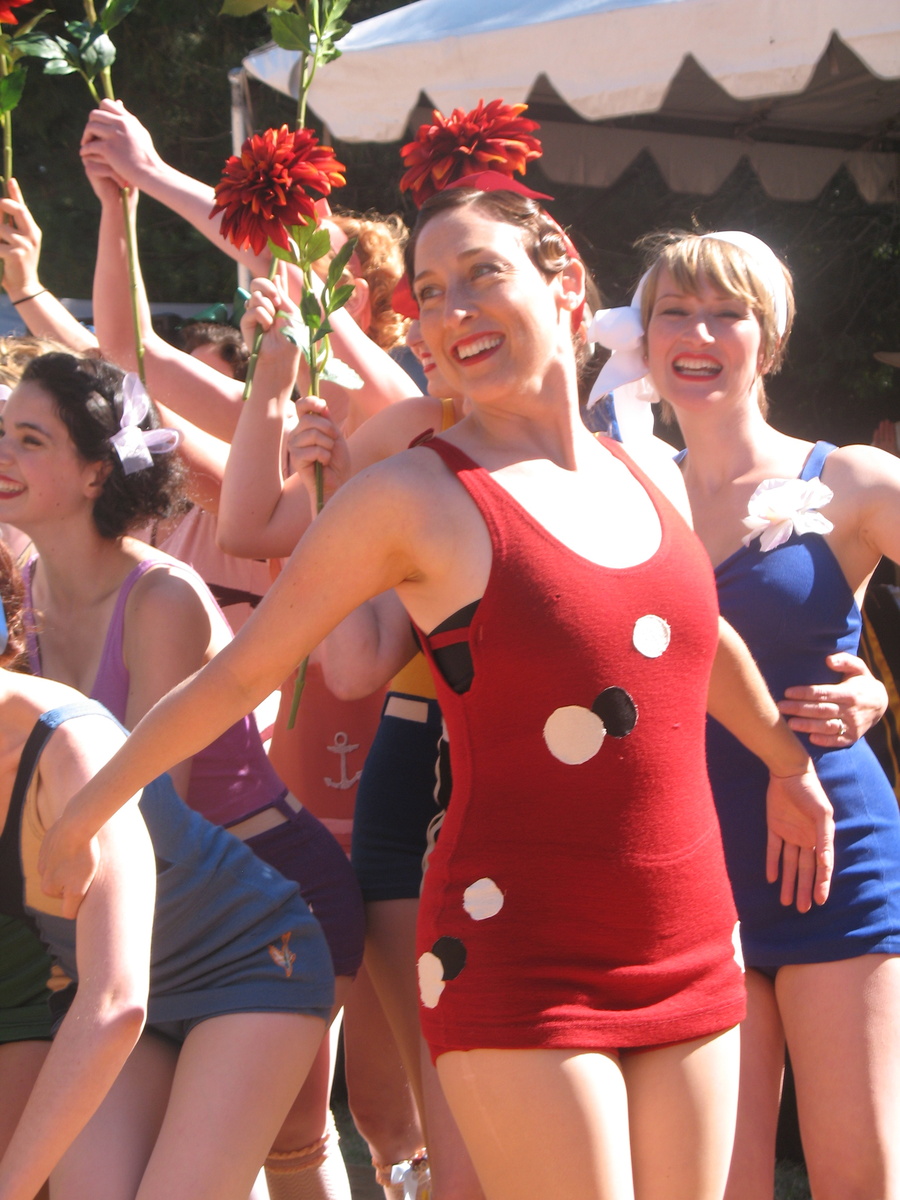 “I think the challenge would be the care of it after you’re done swimming,” Fierro says. “Don’t just take it off, throw it out in the sun to dry, and then throw it in your drawer. You should rinse it out and use a very mild detergent to hand-soak and hand wash your garment if necessary and then roll it in a towel. If you don’t squeeze or twist it, or lay it in direct sunlight, it’ll last a long time.

“With the more recent Lycra spandex stuff, the fabric just breaks down, and you see a lot of pilling or you see runs,” she continues. “You see the little elastic pieces that pull out and just hang there. The majority of the spandex-type fabrics aren’t going to last with regular use like a vintage suit would.”

What’s so interesting is that this is probably the first time in a 100 years or so that the trend has reversed from showing more skin. Fierro, who’s also something of a swimsuit historian on her blog, GlamourSplash, explained that Victorians didn’t swim. They went into the water, covered head-to-toe, and called it “bathing.”

“What’s not to love about feeling sexy in a bathing suit without forsaking dessert.”

Swimming wasn’t even considered a sport until the 1920s, and from that point on, swimsuits got steadily smaller. (See the Art Deco Society of California’s DecoBelles, pictured above right, as examples of what early “bathing beauties” looked like.) At first, it was shocking to show your knees, but by the mid-1930s—not the ’40s like many people believe—women were wearing two-pieces.

Fierro thinks it’s Parisian Coco Chanel’s fault. A frequent fixture in the United States, she went to Europe one year and came back with a tan. Previously, Americans had revered pale skin as a signal of wealth, as poor farm laborers tended to be the ones with tans. We can blame Coco for the skin-endangering laying-out-as-leisure craze that led to tanning booths, but she also created clothes that women could move in, liberating ladies to participate in sports.

“When she came back with a tan, it caused a rage—everybody had to have a tan. Then, of course, solariums became popular. The sun was considered to be cleansing, like a medicine. People started saying things like, ‘Go out and get a suntan; it’s good for you.’ Then, athleticism and exercise came more into vogue. Swimwear began to reflect this, new fabrics were introduced, and the suit started to become smaller.” 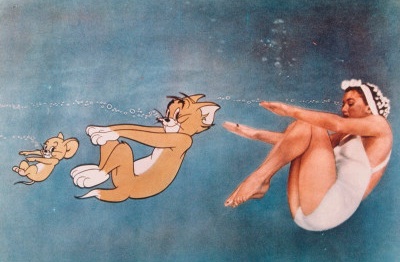 Speaking of sports, the delightful Olympic sport of synchronized swimming didn’t exist until the ’40s, when Esther “Mermaid” Williams hit the Hollywood scene and made a whole series of charming “water ballet” movies. Her influence extended to fashion, too, as seen in the many wonderfully wacky swim caps she wore, adorned with plastic flowers and bows.

(All images from GlamourSplash and GlamourSurf, except for the top right image of the 1954 Miss Surfestival pageant, from Celebuzz; the picture of the DecoBelles at the Gatsby Summer Afternoon, by Lisa Hix; and the images of Esther Williams.) 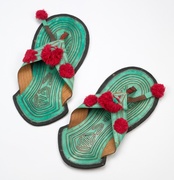 Womens SwimwearAt the beginning of the 20th century, when men and women went to the beach,…