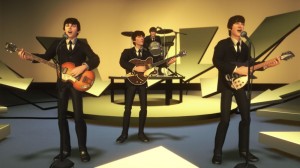 I read the news today, oh boy! About a lucky bunch of video-game enthusiasts and Beatles fans whose garage-band wet dreams are about to come true. Yes, the Beatles are finally loosening the legal stranglehold on their music catalog to allow Harmonix, maker of the Guitar Hero and Rock Band franchises, to release a new video game for the Xbox 360, Nintendo Wii, and Sony PlayStation 3. Titled “The Beatles: Rock Band,” the game is due in stores on September 9, 2009 and is destined to become an instant piece of Beatles memorabilia.

One of the many events staged to announce this happy news was a free, 20-minute performance on July 15, 2009 by Paul McCartney and his band atop the Late Show with David Letterman marquee in front of the Ed Sullivan Theater. McCartney is not the first musician to use Letterman’s sign as a stage—Audioslave, Bon Jovi, Dave Matthews, and Phish have all performed on the famous Broadway landmark. But McCartney is certainly the first performer to have played both Letterman’s sign and the theater inside, when, in 1964, Ed Sullivan gave the Fab Four their U.S. television debut.

One of the numerous cool things about the game is the length to which the producers have gone to keep the experience real. For example, players can choose to strum John Lennon’s Rickenbacker 325 guitar, McCartney’s Höfner bass, George Harrison’s Gretsch Duo Jet guitar, or Ringo’s Ludwig drum kit.

The tunes they will play will be the best songs from a decade of Beatles records, including “I Want To Hold Your Hand,” “Day Tripper,” “Back in the U.S.S.R.,” “Here Comes the Sun,” and “Get Back,” all produced from the original masters. As for venues, players will be able to take the stages of Liverpool’s Cavern Club and New York’s Ed Sullivan Theater (of course), as well as the legendary studios at Abbey Road.