Bizarro Beauty Products, from 1889 to Now 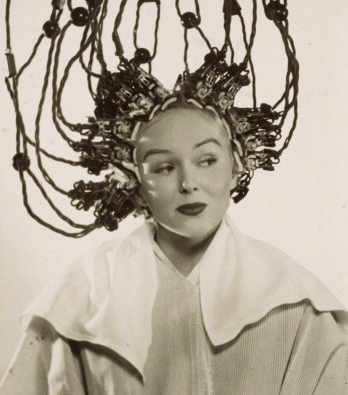 We tend to think of the union of vanity and technology as a particularly modern affliction. It’s only recently that science brought the world botox and collagen injections, skin peels, liposuction, and breast implants. And thanks to the Internet world of photo-sharing and online gossip, the obsession with looks only gets amplified in the social-media echo chamber. Tales of plastic surgery spread like contagions online: Everything from a celebrity’s slight change in appearance (see Kristen Stewart) to a disturbing fixation on perfection (see bridalplasty).

Hucksters offered devices for fuller breasts. Why not inflate them like balloons?

But the truth is, humans have long been pursuing this elusive quality known as “beauty” before the miracles of modern medicine. Inventors were always coming up with tools meant to help women—and men—achieve the wide-held physical ideals of their era. Eager test subjects would get hooked up to devices that looked like torture machines, or they would employ products that contained poison. You can be sure that, when it came to results, most of these people ended up disappointed.

While it is easy to laugh at these ridiculous gizmos, modern-day gadgets prove we’re no less gullible than our forebears.

Victorian and Edwardian women had elaborate corsets and hoop skirts to hide and control their bodies, so that every proper lady appeared to have the desired wasp-waisted figure. Because the body was so well-covered, only the face revealed one’s natural beauty. To be considered truly lovely, a woman was expected to have pale, unblemished skin that was soft and supple. 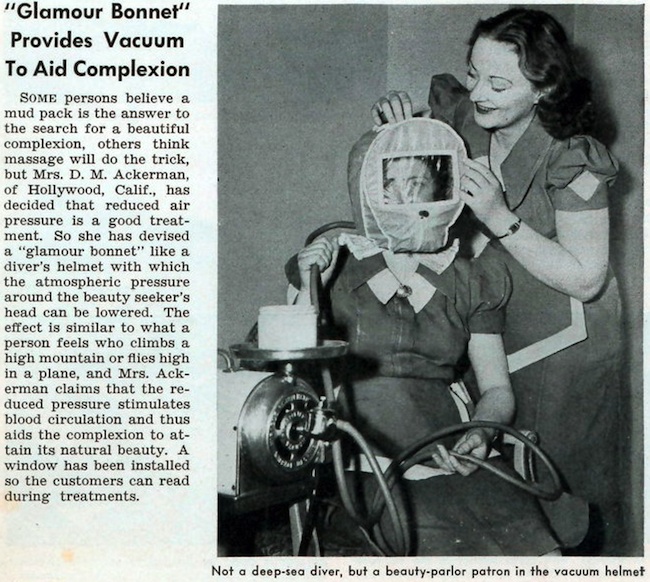 The 1941 Glamour Bonnet was supposed to improve your complexion by reducing the air pressure around your face. Via ModernMechanix.com.

Naturally, innovators got to work developing products to protect and restore precious, youthful skin. In 1889, Margaret Kroesen grew concerned that her daughter Alice, a concert pianist, was developing frown lines—and that those damning wrinkles could hurt her stage career. According to the company’s site, the elder Kroesen came up with a product called Wrinkle Eradicators (now known as Frownies), which consists of unbleached paper strips backed with a vegetable-based adhesive.

Frownies has so successfully bombed Google with its product, still made today, it’s impossible to find an objective review. But the company insists that the tape, a supposed “Hollywood secret,” works by “employing the basic principle of fitness to the muscles of the face.” You hear that? Your face needs a trip to the gym, too. 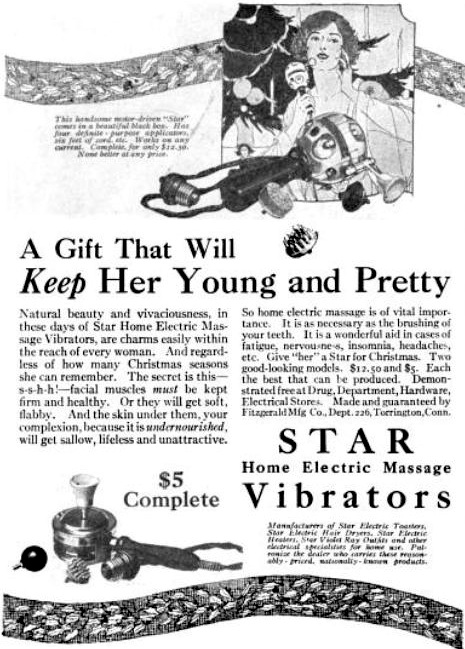 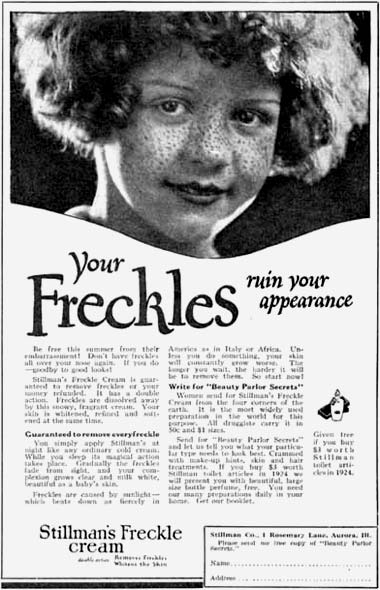 The active ingredient for Stillman’s Freckle Cream was mercury. Via ComesticsandSkin.com.

When Coco Chanel got a sunburn on the French Riviera in the 1920s, she made tans cool, but women still wanted to avoid freckles like the plague. They were so vigilant in their fight against this scourge that they covered their faces and bodies with patent-medicine ointments, such as Stillman’s Freckle Cream and Othine Freckle Remover, which contained dangerous levels of mercury, and wore comical sun-proof masks and capes. Even Amelia Earhardt, known for her high-flying heroics, felt ashamed of her natural speckles, and the possible site of her final landing has been recently identified by a bottle of Dr. C.H. Berry’s Freckle Ointment. 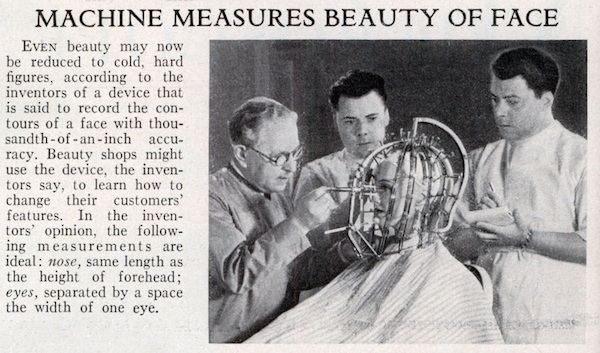 Max Factor (left) and his assistants analyze a woman’s face in 1933. Via ModernMechanix.com.

With the burgeoning movie industry, unbelievably beautiful Hollywood stars became larger than life in the 1930s. So it’s not surprising their flawless close-up mugs became a national obsession. What is it that makes them so comely? Can it be measured, analyzed, and re-created at home? Chemist, cosmetician, and wig-maker Max Factor led the charge with this frightening looking device from 1933. While the Beauty Micrometer looks like something out of a “Hellraiser” nightmare, apparently it was pretty innocuous: It measured your face and head to determine where you should apply blush, shadow, and highlights to the greatest effect. 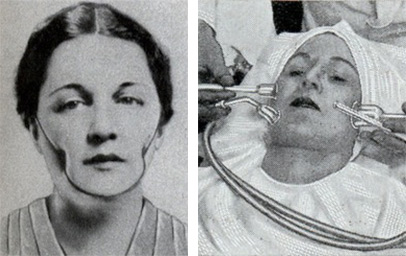 Isabella Gilbert’s Dimple Machine from 1936 and a 1932 Suction Treatment for skin-cleaning. Via ModernMechanix.com.

Modern Mechanix has uncovered several other disturbing 1930s and ’40s beauty devices, including Isabella Gilbert’s metal brace that could dig those smiley dimples right into your face and a vacuum procedure that claimed to suck the wrinkles right out of your skin. The Glamour Bonnet, which inventor Dr. D.M. Ackerman asserted could improve one’s complexion by reducing air pressure around the skin, looked more like the equivalent of putting a plastic bag over your head.

We already told you about all the strange contraptions people have used through history in attempts to stay effortlessly svelte and fit—from mechanical horses to strange stretching hammocks and vibrating belt machines. But despite any bust-increasing exercises you may have learned reading the 1970 Judy Blume book “Are You There, God? It’s Me, Margaret,” you can’t work-out your way to more curves. 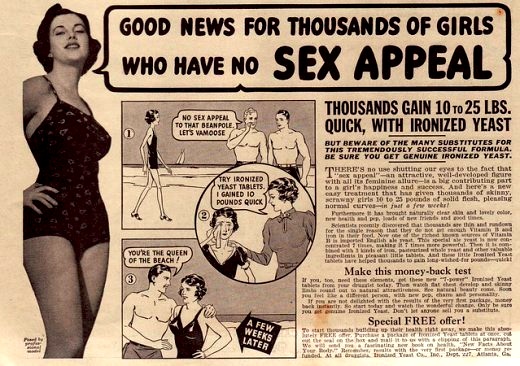 An ironized yeast ad from “True Romance,” July 1937. Via WorldofWonder.net.

Back in the Roaring Twenties, society was scandalized and titillated by brazenly androgynous flappers with their skinny arms, boyish haircuts, and reedy bodies, a liberating rebellion from the tight-laced binds of Victorian propriety. But during the Depression of the 1930s, being thin and malnourished became depressingly common. That’s why, as strange as it seems now, bigger bodies were considered better: Wealthy people were hearty and well-fed. So ads in the 1930s and ’40s promoted “ironized yeast” as a way to “gain 10 to 25 pounds” quickly.

In 1949, the Breathing Balloon promised to help you “develop your form.” Via ModernMechanix.com.

It’s tempting to celebrate these ads as beacon of a body-positive past, a beautiful time before celebrities and models were encouraged to starve themselves. But the truth is, you’ll notice the “10 or 25 pounds” promised in these ads always deposits itself on the women’s breasts and hips in sexy hourglass proportions. In reality, for many women a large part of that promised fat would go directly to the belly. Even then, chubby bellies and expanding waistlines were not idealized by our Hollywood-obsessed culture. 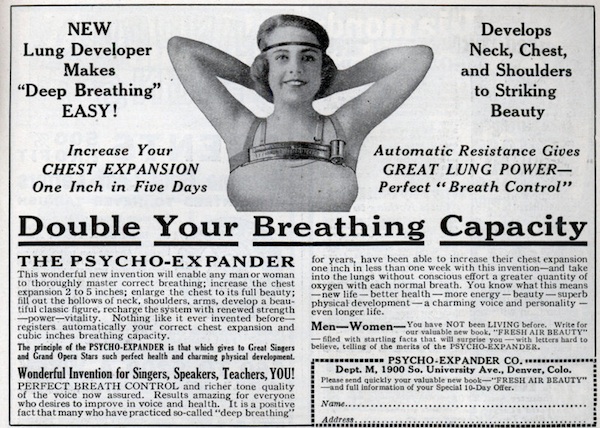 A 1924 ad claims this device will “enlarge the chest to its full beauty.” Via ModernMechanix.com.

For what it’s worth, men, too, were berated for thinness, i.e. being the “90-pound weakling,” in the ’30 and ’40s. Ads for ironized yeast and fitness programs, like the one created by bodybuilder Charles Atlas, promised to turn scrawny nerds into strapping hunks in a matter of weeks.

When it comes to hairstyles, the fashion consensus about what kind of hair is most lovely has swung wildly between curly and straight. That’s why you have women wrapping their hair in Coke cans one decade, and then flattening their locks with clothing irons the next. 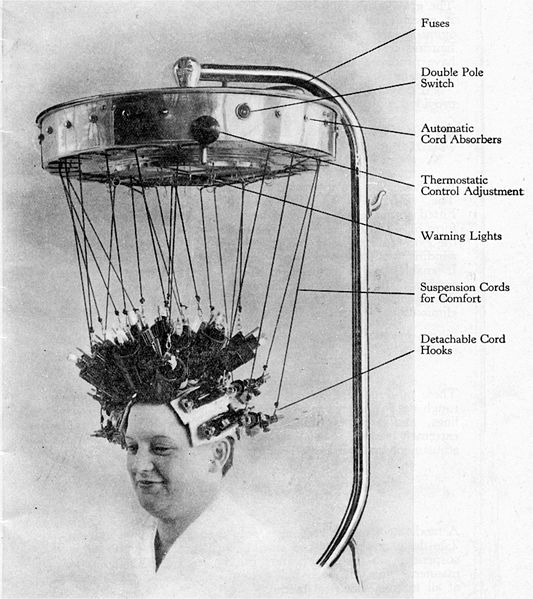 Icall debuted the wireless perm machine in 1934, which was unplugged before the curlers were attached to the head. From “Permanent Waving: The Golden Years” by Louis Calvete.

Perhaps the most freakish mad-scientist-looking beauty device of the 1920s was the permanent waving machine. Designed to give a woman a head of springy curls, it also (temporarily) made her look like the Bride of Frankenstein, waiting for a jolt of lightning. In the late 1930s, the chemical perm was invented, and soon these cumbersome machines were deemed as outdated and scrapped. 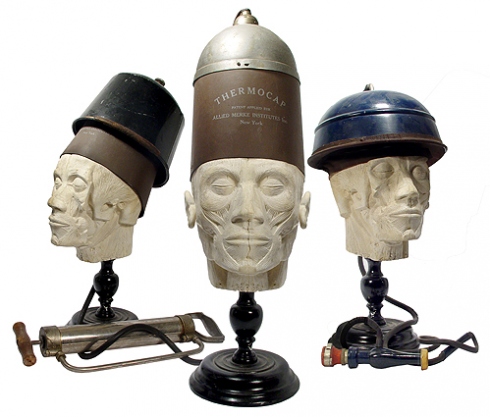 Men were not immune to hair vanity. According to our friend Steve Erenberg in his Industrial Anatomy newsletter at Radio-Guy.com, Victorian scientists believed that increasing blood flow to the head could cure baldness. Before hair plugs and Rogaine, men with receding hairlines donned crazy caps with heaters, head pumps, and vibrators in hopes of growing a new lush head of hair. 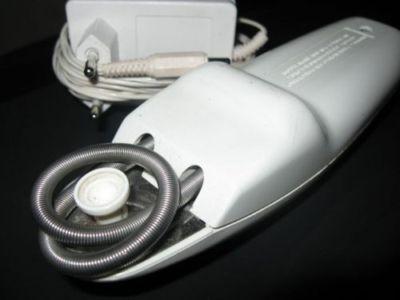 On the flip side, men and women have long faced the laborious task of removing unwanted hair. In 1986, the Epilady, promoted in teen magazines as a leg-shaving alternative, was all the rage. Its vibrating metal coil did, in fact, do what it promised: Pull out individual hairs. But, as Pam explains at the Go Retro blog, it hurt like hell. Today, we have something called the No! No!, which burns each strand down to its roots using “heat transference.” The No! No! promises “virtually” no pain, as long as you aren’t sensitive to the stench of smoldering hair. 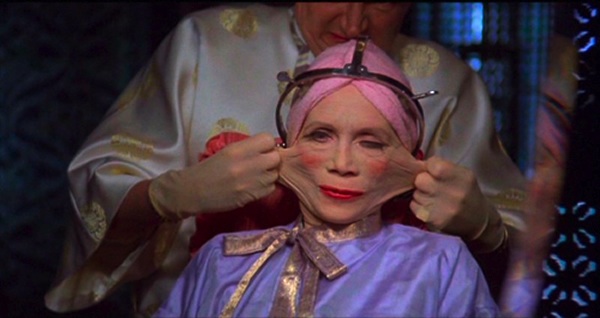 A plastic surgery scene from the 1985 dystopian comedy “Brazil.”

Of course, today, we live in a world with endless options for altering your appearance. You can have professionals help you tan, wax, and buff your skin. You can get your hair chemically treated and then style it with hand-held devices. As predicted in 1985’s dystopian comedy film “Brazil,” plastic surgery is widespread and accepted now.

The Rejuvenique skin-stimulating mask, at right, could double as a Halloween costume if you wanted to be Jason Vroohees from the classic horror series, “Friday the 13th.”

But none of this is quite as much fun as the beauty gadgets sold on late-night TV. The most hilariously creepy is the Rejuvenique facial mask pitched by “Dynasty” star Linda Evans in 1999. The vibrating mask, designed to work-out the muscles in your face, bears a little too much resemblance to Michael Myers in “Halloween” and Jason Voorhees in “Friday the 13th.”

In 80 years, they’ll be laughing at us: from left, demonstrations of Slendertone Face, the Facial-Flex, and the FaceMaster.

Now, there’s the mouth-muscle stretching Facial-Flex, meant to “lift, tone, and firm your neck, face, and chin.” You can try the mysterious “wave” technology of the FaceMaster, endorsed by “Three’s Company” star Suzanne Somers, and the “electrical muscle stimulation” of the Slendertone Face, both of which claim to erase wrinkles. The informercial of Neckline Slimmer, which requires the silliest exercise you can imagine, insists it can eliminate double chins.

Laugh at those vintage ads all you will, but these modern products show us how little has changed since the 1930s. What will the people of the future—who may invent the ultimate beauty machines—think of us?

Too Lazy To Work Out? Machines That Exercise for You, From Victorian Era to Now