Everything You Know About Corsets Is False 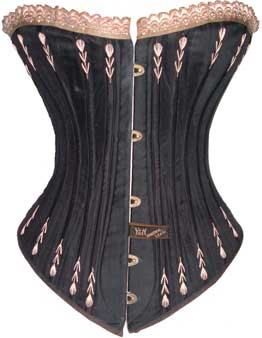 The corset has a bad reputation. And unfairly so, according to Valerie Steele, director and chief curator of The Museum at the Fashion Institute of Technology, who says this undergarment of centuries past is not nearly as evil or confining as modern folks have come to believe.

With the Edwardian Balls just around the corner, we started ogling gorgeous antique corsets on the Internet, including this 1895 pink-and-black Y&N corset (right). Then, we asked Steele, the author of The Corset: A Cultural History, to set the record straight about this much-maligned piece of fashion history. Here are her top three misunderstood facts about corsets:

1. Thirteen-inch waists are a thing of myths.

Even though so-called “tight-lacing” was popular during the late 1800s, women rarely reduced their waists more than 1-2 inches. Generally, a corset with a 20-inch waist would be worn with a gap in the back, so the woman’s corseted waist measured between 22 and 26 inches. Where did these tales of ladies of the court and their obscenely tiny 13-inch waists come from? Fetish fantasy literature of the era.

“A lot of people believe in the 16-inch waist being typical when, of course, most corsets were no smaller than in the 20s,” Steele says. “Most people would reduce by a couple of inches. You can reduce it 4 inches or so, but most women were not going to be doing any more than that.”

2. Corsets did not create misshapen livers or life-threatening diseases. 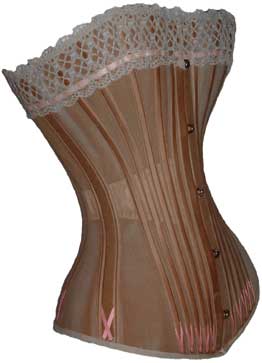 A long corset made by CK in Belgium, circa 1890. From the collection of L. Hidic, corsetsandcrinolines.com, via The Antique Corset Gallery.

Over the years, corsets have been credited with causing a whole litany of health problems. It’s been said that they misshape internal organs and cause cancer. Other illnesses attributed to corsets were fake, sexist conditions, like “hysteria.” There’s also no record of a woman having a rib surgically removed so she could better fit into a corset, which is a particularly absurd myth, given how deadly surgery was in the 1800s.

Of course, they weren’t exactly the healthiest things to wear every day, either. They did force organs to shift around, cause indigestion and constipation, and eventually weakened back muscles. And they didn’t leave a lot room for pregnant women’s fetus-incubating bellies. But deadly they were not. They also didn’t prevent women from doing their work—any more than, say, stiletto heels do.

“Most people today think corsets were extremely dangerous and caused all kinds of health problems, from cancer to scoliosis,” Steele says. “And that’s quite inaccurate. Most of the diseases that have been credited to corsets, in fact, had other causes. Corsets did not cause scoliosis, the crushing of the liver, cancer, or tuberculosis. It doesn’t mean that corsets were without any health problems, but it does mean that most modern people are wildly naive in believing the most absurd antiquated medical accusations about corsetry.

“For example, the idea of the misshapen liver seems to be a mistake based on the fact that there is a lot of variation in the shape of livers. When doctors did autopsies, they would see these weird-looking livers and they’d go, ‘That was caused by the corset.'”

3. Men did not force women into corsets. 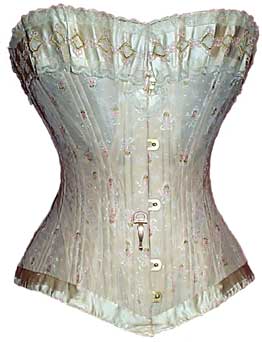 Madame Lemay silk damask corset, circa 1901. From the collection of M. Talkington, laceembrace.com, via The Antique Corset Gallery.

Steele says women wore corsets quite on their own volition. Men, in fact, regularly protested corsets, claiming they caused hysteria and the other health problems mentioned above. Women wore the corset because it made them feel attractive and properly dressed, she says, two important indicators of status. However, they were intended to reshape the natural body to what women perceived as the most ideal figure—meaning the most youthful and sexually desirable. Men might not have oppressed women by demanding they wear corsets, but women certainly wore them to impress men and assert their rank among other women.

“The corset was associated with high status and with respectability, indicating you’re not loose,” Steele says. “Also, it enhances the sexually dimorphic curves of the female body. It acts like a proto-Wonderbra and also emphasizes the waist-hip differential, which makes you look younger, slimmer, and curvier—which is still what everybody wants. But now women get on a StairMaster or get plastic surgery instead of putting on a corset.” 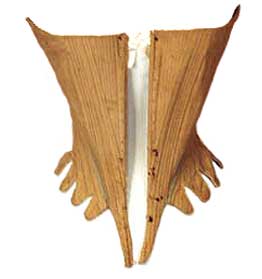 A hand-made cone-shaped stay corset from circa 1786. From the collection of K. Augusta, antique-fashion.com, via The Antique Corset Gallery.

In early 16th century Europe, corsets called “payre of bodies” pushed the breasts upward and shaped the torso into a slim cylinder, thanks to boning made of horn, buckram or whalebone, and a flat wooden “busk” running down the center. But by the 17th century, corsets took on more of a cone-like shape, often made of two separate pieces of boned fabric known as stays, held together in the front with the busk. For a brief time, from 1800 to 1830, the Napoleonic high “empire waist” look freed bellies from the confines of waist-constricting stays, as corsets became smaller and closer to modern-day bras.

The Victorian Era revived the desire for wasp waists and hourglass silhouettes, and so corsets, now extending below the waist and incorporating steel boning, created that shape. Curves were further exaggerated with big shoulders in blouses, and huge hoop skirts over layers of crinoline. Also, new manufacturing technology allowed for affordable mass-produced corsets, which had previously been custom-made to a woman’s measurements.

This illustration from a 1900 issue of Ladies Home Journal shows the change from Victorian to Edwardian silhouettes.

The Edwardian period hailed a whole new corset shape. This decade at the turn-of-the-century (1901-1910) represented a tremendous time of transition in fashion, as the elaborate getups of the Victorian Era got a bit more ridiculous, and then fell out of style all together.

A corsetier with an M.D., Inès Gaches-Sarraute, came up with the straight-front corset—also known as the “swan-bill,” “S-line,” or “S-bend” corsets—which he believed kept the pressure off a woman’s stomach. But these corsets forced women to tilt awkwardly, hips back, breasts forward, and created an exaggerated S-shape in the back. Of course, these were probably much worse for one’s health, putting all sorts of strain on the spine by forcing such an awkward posture. But if a woman were to dress as an authentic Edwardian, this is the sort of corset she’d wear. 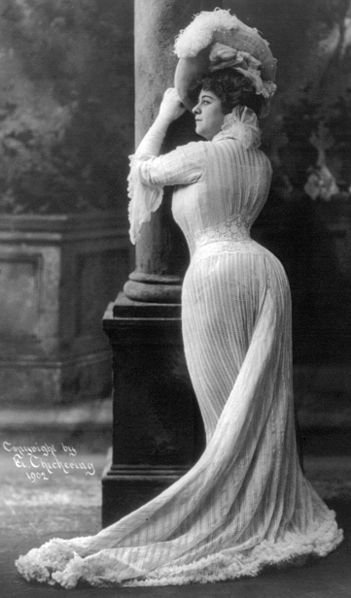 Between 1908 and 1914, fashion favored a more natural shape, but corsets got even bigger and more complicated, extending down to the thigh and creating a higher waist. 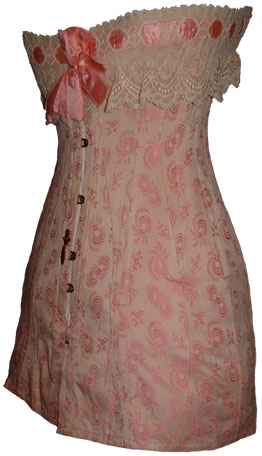 An early 1910s longline corset made from bow patterned pink brocade. From the collection of L. Hidic, corsetsandcrinolines.com, via The Antique Corset Gallery.

“You’re getting a shift away from what high Victorian and Edwardian fashion writers described as ‘the Venus ideal’ and a movement towards ‘the Diana ideal,’ which was slimmer and more athletic,” Steele says. “So increasingly, people started to say that they didn’t need to wear a corset, that their body was already ideal. Often, when you read old interviews, actresses will say, ‘I don’t need to wear a corset,’ but you look at their photograph and you go, ‘Babe, you are so wearing a corset.'”

In the 1910s and 1920s, as women became more interested in sports and clothes that allowed for a greater freedom of movement, the socially desirable silhouette changed to a thinner, more streamlined figure. New elastics allowed for shaping undergarments that narrowed the hips without the use of steel boning.

“By the 1910s, the tango had become trendy,” Steele says. “If you had a boned corset, your movements weren’t right, so people would wear these boneless tango corsets, which are just long elasticized girdles. And there began to be a gradual movement towards dieting and exercise as the way to control the way your body looks. By the ’20s, of course, your clothes were showing more of your body. You couldn’t hide behind corsetry so much anymore.”

While these new hip-controlling girdles and breast-supporting brassieres became the order of the day, corsets made a comeback briefly in the late 1930s—after World War II interrupted fashion, they returned again for Dior’s New Look, which emphasized small waists, full busts, and big flowing skirts. They went out of fashion again when ’60s mod style brought back the short skirts and girlish figure of the ’20s and the hippie movement embraced more natural body shapes.

“When you read old interviews, actresses will say, ‘I don’t need to wear a corset,’ but you look at their photograph and you go, ‘Babe, you are so wearing a corset.'”

Ever an object of fascination and debate, the corset will make its way out of the closet in the coming weeks, as the Edwardian Ball hits San Francisco’s Regency Ballroom on Jan. 20 and 21 and Los Angeles this spring, date and location to be announced. These events are a fantastical and Halloweeny celebration of macabre mid-century illustrator Edward Gorey, as well as of the fashions of the Edwardians.

This year, Edwardian Ball goers will surely see plenty of outerwear corsets at the events, where people let their imaginations run wild a la Burning Man and mine countercultures like goth, bondage, and steampunk for inspiration. But for ladies who value historically accuracy, the swan-bill corsets will be worn more discreetly under the layers of lace, ruffles, and ribbons of their gorgeous period-perfect gowns. 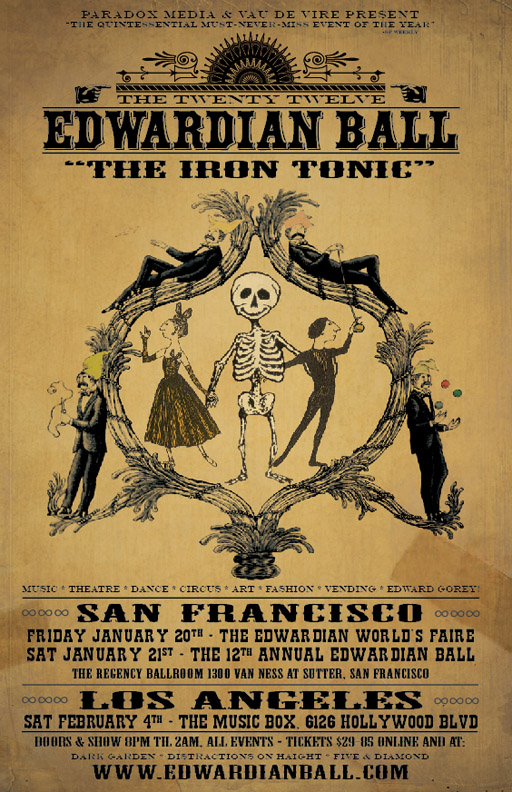 From Whale Jaws to Corsets: How Sailors' Love Tokens Got Into Women's Underwear 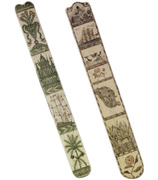 Va-Va-Voom Vintage: Dita Von Teese on Burlesque, Cars, and LingerieSexier Than Silk: The Irresistible Allure of the Nylon Slip

Victorian Era ClothingThe Victorian period ran from 1837 to 1901 and is named for Queen Victoria,…

Edwardian Era ClothingThe beginning of the 20th century was a confining time for many women, as s…