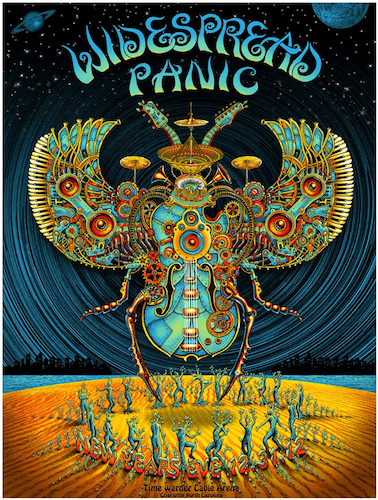 My love affair with rock posters began in the late 1960s, when I spent as many weekends as I could with a friend who lived in San Francisco. Whenever we were allowed, we’d hang out in his older sister’s bedroom, where the walls were covered with rock posters, mostly from the nearby Avalon Ballroom. I’m pretty sure she had a poster known as the Snake Lady, as well as the Woman with Green Hair and Dian. Naturally I had a pre-teen crush on my pal’s older sister, but she was way out of my league, so the posters became the objects of my desire.

New Year’s Eve posters soon became my favorite subset of rock posters, the catalyst for that narrow passion being my first New Year’s Eve concert in 1970 (the full story of that youthful escapade is here). The great David Singer created the memorable image for that concert, as he was one of the Fillmore’s main artists at that time. To see his 1970/1971 poster, as well as other New Year’s Eve images from 1966 to 2012 (the one above is by Emek), check out the slideshow below. My list (updated for 2013) is purely subjective, so feel free to link to your favorites in the Comments box below. 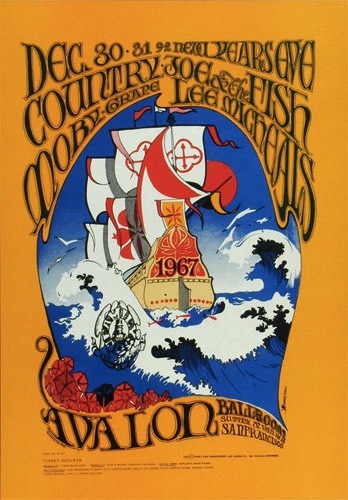 Known as "Ship," this 1966 poster by Stanley Mouse and Alton Kelley was the first New Year's Eve poster at the Avalon Ballroom in San Francisco. Photo: dking-gallery.com

Known as "Ship," this 1966 poster by Stanley Mouse and Alton Kelley was the first New Year's Eve poster at the Avalon Ballroom in San Francisco. Photo: dking-gallery.com 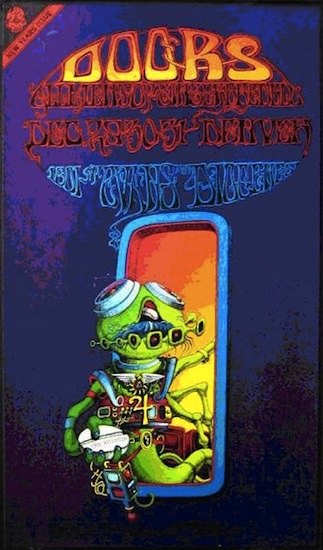 A Rick Griffin poster for a Family Dog in Denver show featuring The Doors, 1967. 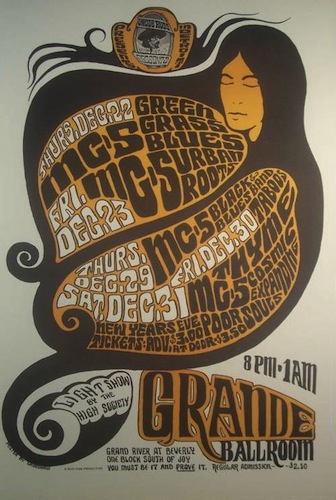 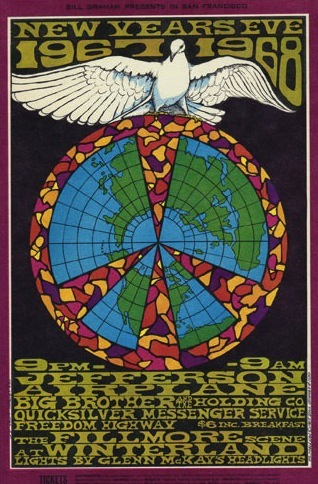 Bonnie MacLean's 1967 poster for a New Year's show at Winterland promised 12 hours of music, plus breakfast, for $6. Photo: dking-gallery.com 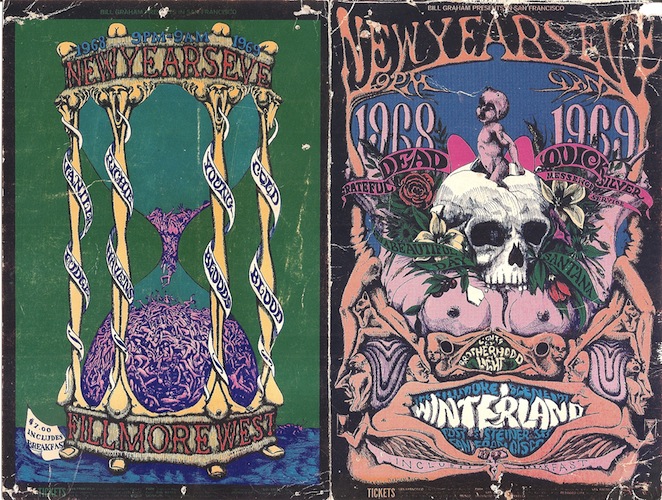 This is my postcard version of a pair of 1968 posters for concerts at the Fillmore West and Winterland. This piece of paper barely survived being cut in half and two rainy winters in a tree fort. Lee Conklin did the art. 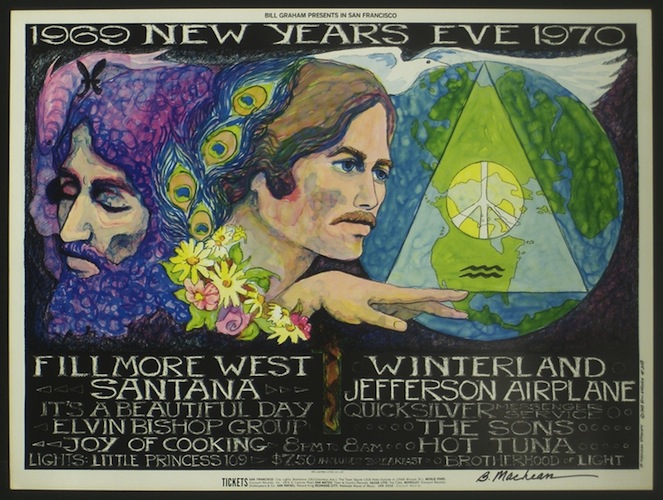 Another year, another Bonnie MacLean New Year's Eve poster. By 1969, Santana was a headliner and Jefferson Airplane had spawned Hot Tuna. 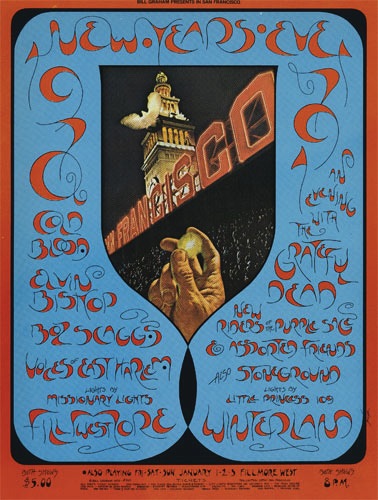 David Singer, who created this poster for the show I saw at the Fillmore West in 1970/1971, is a master of collage and hand lettering. Photo: dking-gallery.com 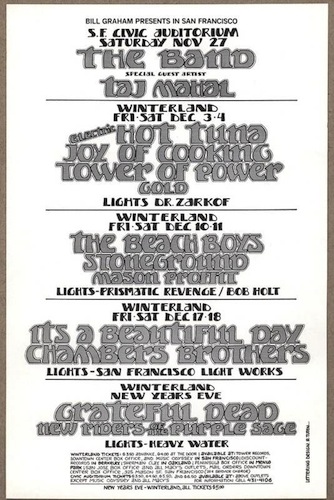 After he shuttered his Fillmore venues on both coasts, Bill Graham cut back on posters for his concerts. In 1971, hand-lettered handbills such as this one by Randy Tuten were typical. I was fortunate enough to see the show at the bottom. 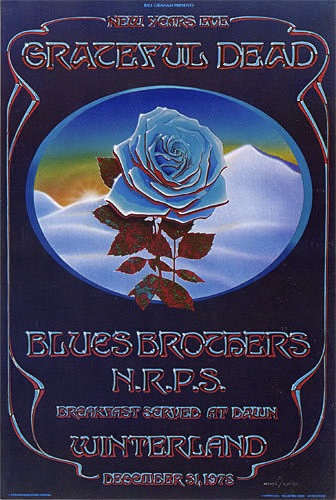 For the last New Year's Eve concert at Winterland, promoter Bill Graham pulled out all the stops, with a lineup that included the Blues Brothers and a poster by rock-poster legends Alton Kelley and Stanley Mouse. Photo: dking-gallery.com 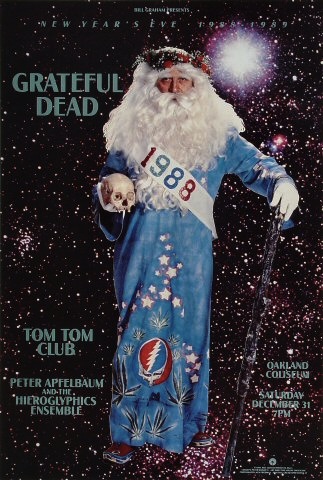 The connection between Bill Graham, the Grateful Dead, and New Year's Eve was a strong one, as seen in this poster for the 1988 show, with Graham dressed up as Father Time. Design by Arlene Owseichik and Ken Friedman. Photo: dking-gallery.com 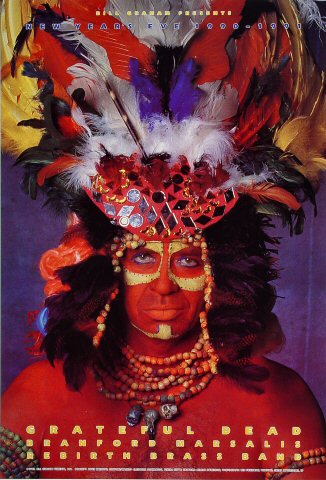 Graham died in a helicopter crash in 1991. For his last New Year's Eve show in 1990, he donned the paint and feathers of a shaman. Design by Arlene Owseichik and Ken Friedman. Photo: dking-gallery.com 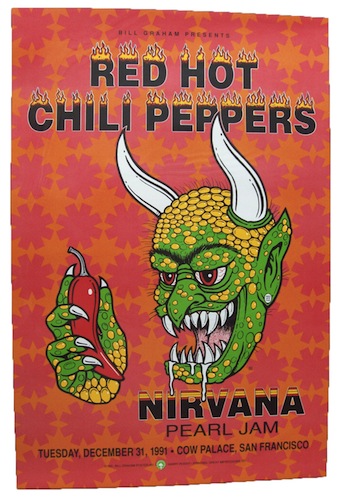 For obvious reasons, this line-up for a 1991/1992 show at the Cow Palace is considered one of the greatest of all-time. Harry Rossit did the art. 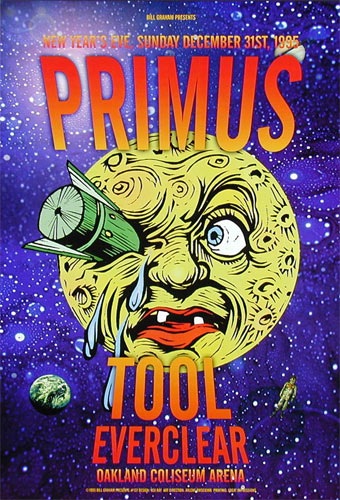 In 1995, Rex Ray riffed on the famous 1902 Georges Méliès film "A Trip to the Moon" for a Primus show at the Oakland Coliseum. Photo: dking-gallery.com 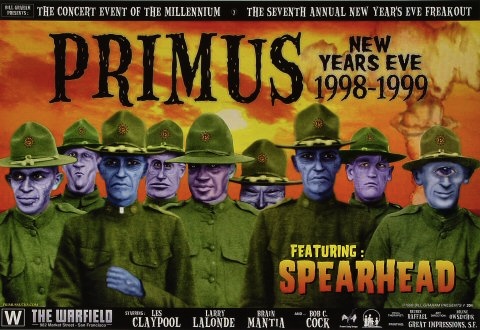 Throughout the late 1990s, Primus was the house band for New Year's Eve in the San Francisco Bay Area. This 1998 poster was designed by Reuben Raffael and Zoltron. Photo: dking-gallery.com 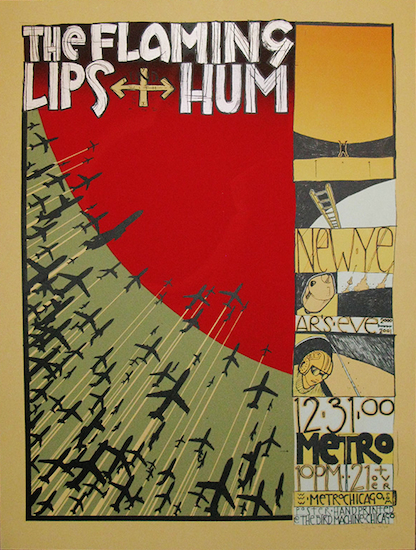 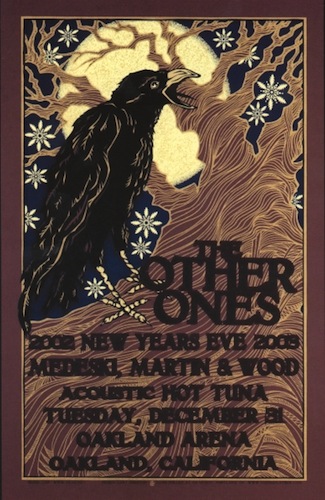 For a while, the post-Jerry Garcia incarnation of the Grateful Dead was called The Other Ones. This Gary Houston poster was commissioned for New Year's Eve, 2002. Photo: voodoocatbox.com 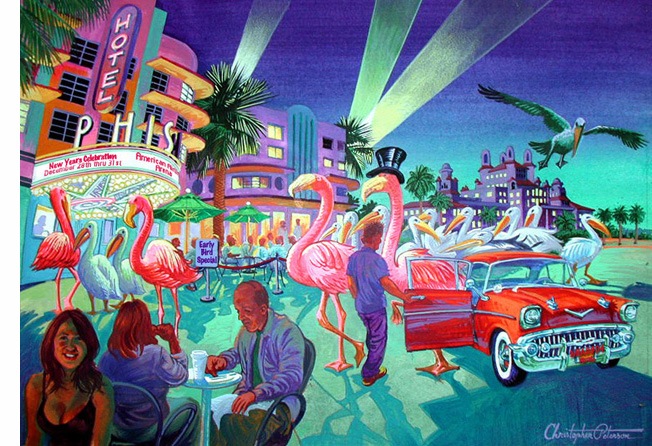 This is the official poster for Phish's New Year's Eve show in Miami, 2003. Artwork is by Christopher Peterson. Photo: petersonland.com 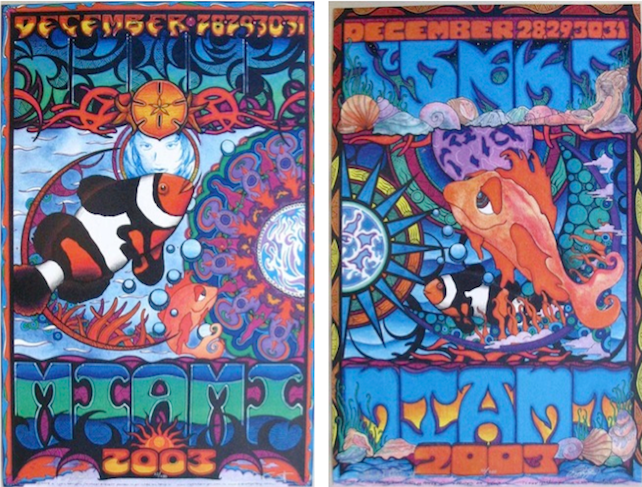 And here's the unofficial "fan art" for the same 2003 Phish show in Miami, a collaboration between Ryan Kerrigan and Michael Everett. Note how the name of the band does not appear anywhere on the poster. Photo: ryankerrigan.com 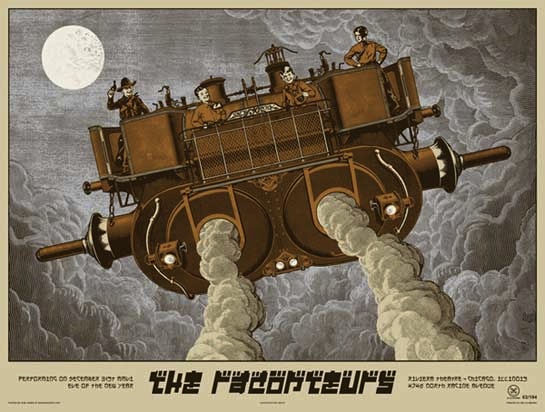 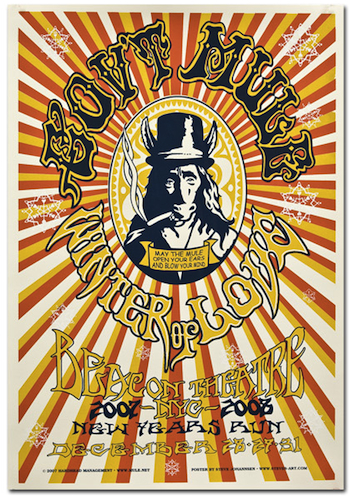 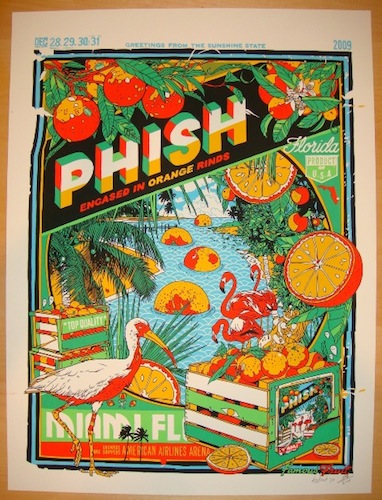 Tyler Stout, who also does movie posters for Mondo, created this design in 2009 for a Phish New Year's Eve run in Miami. Four posters of varying colors were produced. 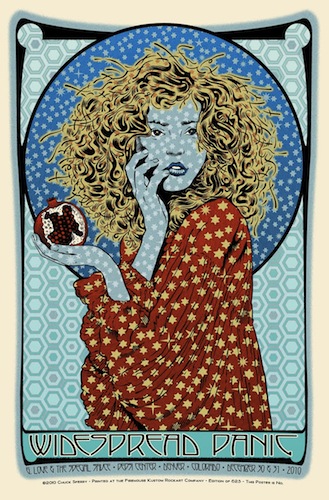 Chuck Sperry's 2010 poster for Widespread Panic's New Year's Eve run in Denver is one of his most beautiful confections. This is the snowflake variant. Photo: insidetherockposterframe.com 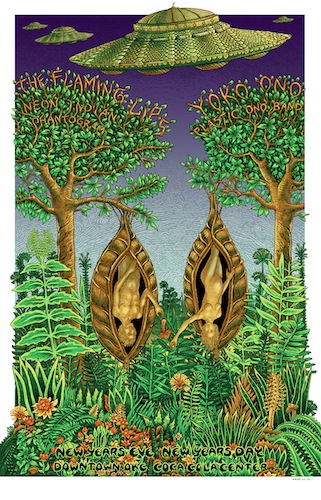 In 2011, Portland rock-poster artist Emek rang in the New Year with the Flaming Lips and Yoko Ono in Oklahoma City, and he created this trippy image to mark the occasion. Photo: emek.net 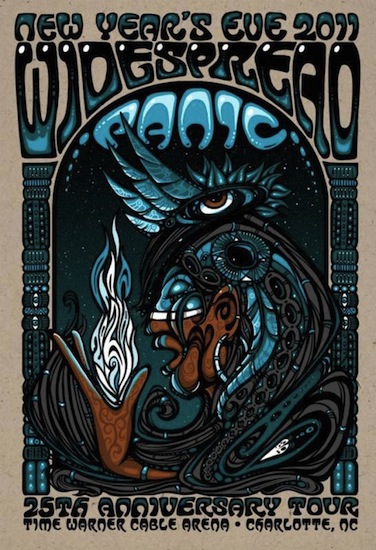 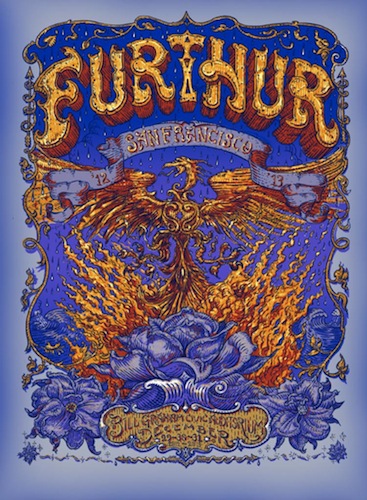 Bob Weir and Phil Lesh of the Grateful Dead now tour as Furthur and have played the last few New Year's Eves, including 2012, at the Bill Graham Civic Auditorium in San Francisco. David Welker, who has also created posters for Phish and Primus, did the art for this one.

Another Widespread Panic New Year's Eve masterpiece, this time for 2012 and by Emek. Photo: emek.net 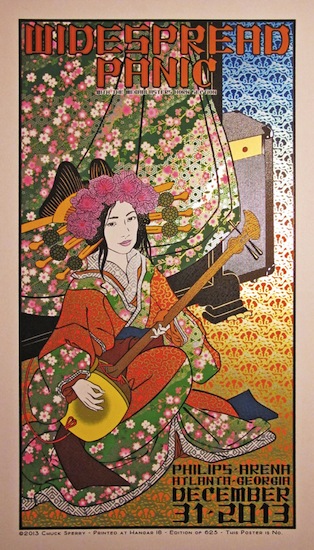 The Storybook-Psychedelic Rock Posters of Marq SpustaDevils, Doves, and World War I: The Rock-n-Roll Posters of Gary Houston