In most collecting categories, antique and vintage pieces are the only things sought by seasoned or aspiring collectors. But in some categories, rock posters foremost among them, it’s contemporary work that’s driving the market and fueling people’s passions.

The enthusiasm for Marq Spusta’s rock posters is particularly high right now, and September of 2010 could prove to be a watershed month for the 32-year-old artist. 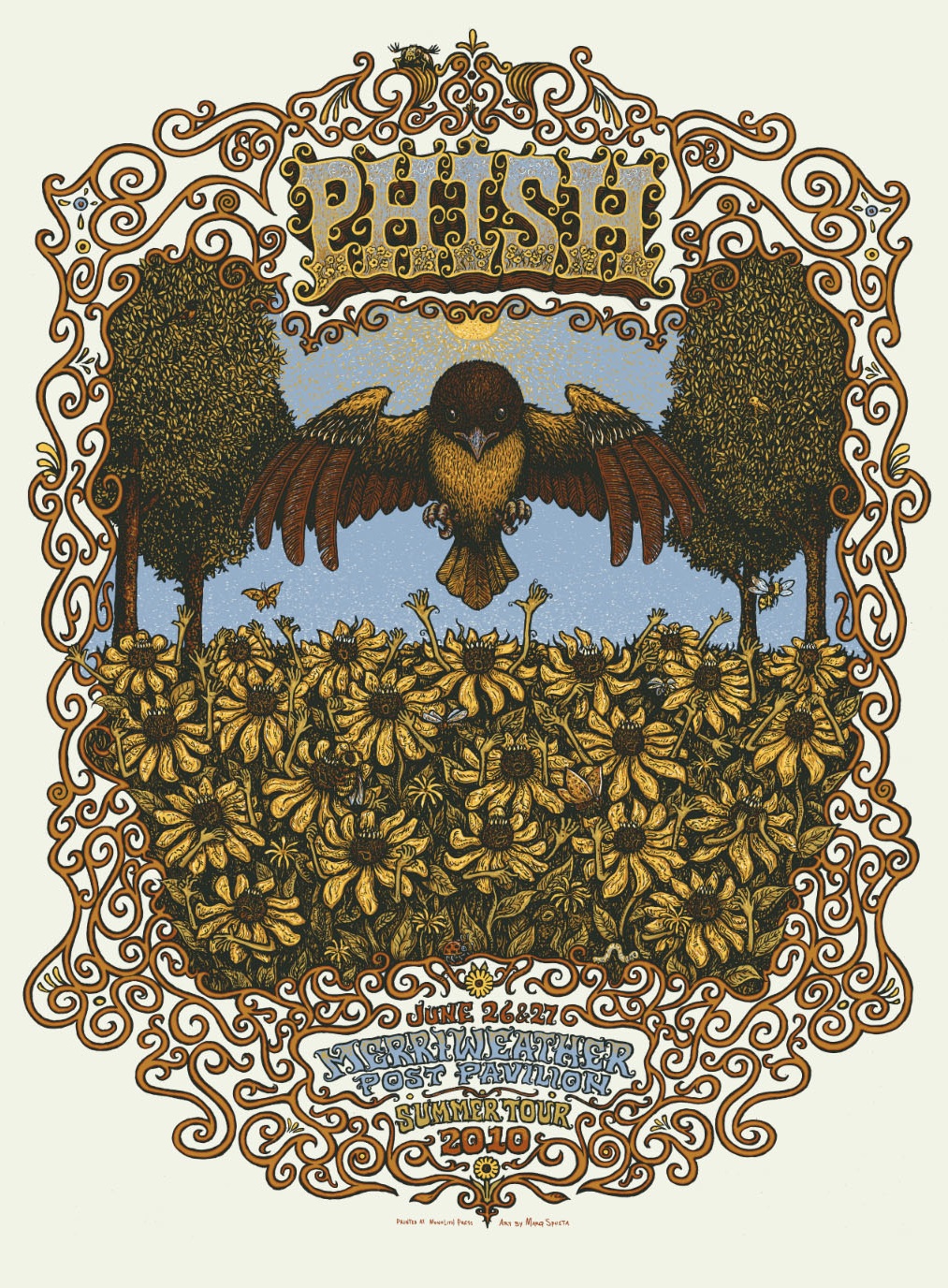 What makes Spusta’s success noteworthy is that he’s achieved it by largely ignoring the usual imagery associated with rock posters—flying eyeballs, rose-draped skeletons, and long-legged, buxom women in various stages of undress. Instead, Spusta’s compositions are trippy and sweet, filled with mythical creatures, wide-eyed children, and flora that would surely puzzle Gregor Mendel. The result is a kind of storybook psychedelia in which the wonder years of childhood gently bump up against old-school surrealism.

Spusta graduated from a northwest Wisconsin university’s design-arts program, where the principles of fonts, color, and form were drilled into students so they would be prepared for jobs in graphic design and—if they were really lucky—advertising.

At first, Spusta did both, but about eight years ago, California called. He answered, moving from Madison to San Francisco and then, eventually, Three Rivers, a small town on the western edge of Sequoia National Park.

“I bounced all over the West Coast,” he says, “ but I feel like a really became a poster artist in Three Rivers. I lived on five acres and didn’t know too many people up that way. Being in the natural world was so much more inspiring to me than being in the city.”

Spusta’s break came in 2006. “I was illustrating a children’s book about pollution called All the Way to the Ocean,” he recalls. “The writer was Ben Harper’s younger brother, Joel. Marc Ford, the great guitarist for the Black Crowes, who was playing with Ben Harper at the time, was also involved. Marc Ford is one of my favorite guitarists, and the Crowes are one of my favorite bands. One thing led to another—I ended up doing a lot of work for the Black Crowes.” 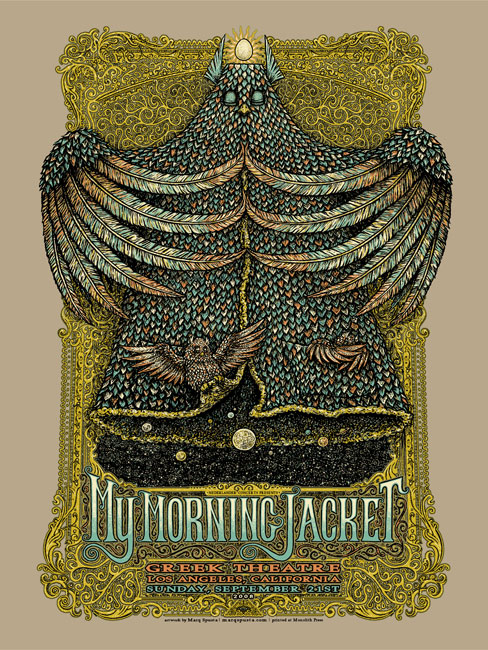 Posters for Gnarls Barkley, the Black Keys, and My Morning Jacket (New Year’s Eve at San Francisco’s fabled Fillmore Auditorium) happened that year, and the Roots, Etta James, and Medeski Scofield Martin and Wood followed in 2007. Spusta also created a Fillmore poster for Tom Petty’s Mudcrutch project and supplied images for the Conscious Alliance’s food drives at the 10,000 Lakes Festival in Minnesota and Langerado in Florida, teaming up with Richard Biffle for that last one. And through it all, Spusta produced posters, T-shirts, and other merch for the Crowes.

It’s fitting that a band named after birds should be so important to Spusta, who frequently uses birds as a motif in his art. In a poster for Faith No More, a long-billed egret, or something like it, snags an octopus in its pointed beak. At first we assume its prize must be a baby, but then we notice the submarine in the cephalopod’s tentacles, forcing us to reconsider the scale of the diving bird.

Sometimes the bird is only implied, as in Spusta’s regal-looking owl from 2008 for My Morning Jacket’s September 21 gig at the Greek in Los Angeles. Riffing on the band’s name, the creature is wearing a coat, albeit one covered in multi-colored scales, more like snakeskin than feathers. In fact, there’s no creature within the coat at all, although a smaller owl tugs at the jacket’s hem with his talons while another appears to be napping in one of the garment’s front pockets.

Other birds have starred in posters for the High Sierra Music Festival, a Crosby Stills and Nash tour, and, most recently, Phish, in which an oriole appears about to land in a field of Black-eyed Susans, some of which wave their human arms in the air, as if in greeting.

Spusta’s work was already well known in the world of jam bands—he has created several posters for Moe and many more for Widespread Panic. But the commission from Phish has been a game-changer for the artist. 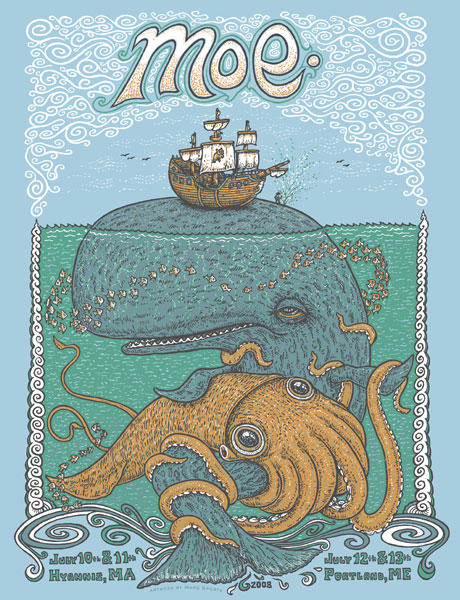 “They called me up out of the blue,” he says. “I felt I was on their radar, in that orbit, if you will, so I guess I was hoping they would.” Spusta was given minimal direction regarding the imagery. “The band was adamant that the poster relate to the venue,” he says of the Merriweather Post Pavilion in Maryland. “The Black-eyed Susan is the state flower; the oriole is the state bird. The only thing Phish definitely did not want me to draw was a fish.”

Beyond avian animals, Spusta has also shown an affinity for creatures of the deep. In addition to the octopus in the Faith No More poster, he conjured a charming scene for a series of shows in New England by Moe, in which a stoned-looking sperm whale caresses a giant squid that’s lying in its lap. There’s a weird tenderness to the scene, which is capped by a three-masted ship that has run aground on the gargantuan whale’s forehead.

And then there are the children. In a 2008 poster for a trio of Widespread Panic shows at the Orpheum in L.A., a giant boy Cyclops kneels in the middle of a palm-treed neighborhood, stacking cars and surfboard-topped vans in a pile as if they were toys. But there’s an uneasy look in his outsize eye as he notices another little boy—normal-sized, caped, and standing on a nearby roof—preparing to aim a sling shot in his direction. It’s David and Goliath played out by innocents on the streets of Los Angeles. I’m pretty sure I’ve never seen that in a rock poster before.

Another Panic poster, this one created for the band’s summer 2010 tour, features a giant caterpillar of some kind (Spusta’s animals are usually hybrids of numerous beasts) grazing in the crown of a leafy tree. Below, a barefoot girl swings on a tire hanging from one of the tree’s branches. She’s stealing a glance at the enormous insect as she plays, but it’s a look of curiosity rather than fear. This is a world where panic is the opposite of widespread. 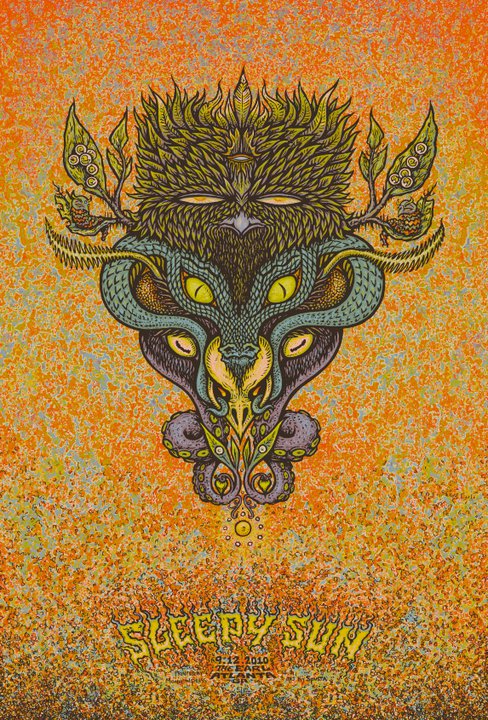 Two things ground Spusta’s psychedelic sensibility. The first is the typography. “Text becomes my manmade structure,” he says of a rock poster’s requirement to identify the name of the band, the venue, and the show dates somewhere within his fanciful worlds. The ornate borders that frame the poster’s central image also impose order on his fantasies. Some of Spusta’s borders are composed of endlessly repeated patterns of curlicues, swooping and bending in mirrored flourishes that make John Hancock’s signature look like Helvetica. In other posters, his borders appear to have been brocaded in gold, their ornate fussiness defiantly Rococo.

For the Rock Poster Society‘s October 2010 Festival of Posters in San Francisco’s Golden Gate Park, Spusta, who is now living back in the Bay Area, plans to bring a lot of new work to his table. “I just have a ton of new posters that I’m kicking out with Monolith Press in September, so I should have a fresh stack there.” After making his name with established acts like the Crowes, Panic, and Phish, Spusta is now doing work for newer bands. “One of my favorites,” he says, “is Sleepy Sun. They already had a great visual legacy with the posters that Alan Forbes did for them, so it’s cool to be a part of that.” Plus, he adds, “they kick serious ass.”

The Sources of Psychedelic Art? Drugs, But Also Picasso and the Fire-Bombing of Tokyo

Music and Concert PostersFor jazz fans, a poster of Chet Baker almost seems to come with its own sou…

Chuck SperryBorn in 1962, Chuck Sperry is one of the world's premier rock-poster artist…