Lately I’ve been on kind of a David Singer binge. In case you don’t know, David Singer was one the most prolific San Francisco poster artists of the late 1960s and early 1970s, creating 66 concert posters for rock promoter Bill Graham between 1969 and 1971. 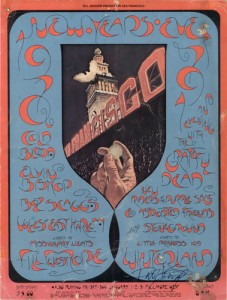 This battered and beloved copy of a Fillmore West/Winterland postcard from 1970-1971 has been signed by David Singer in the lower-right.

One card in particular is perhaps my most cherished material possession. It’s a smaller version of a poster known to collectors as BG-263, which advertised a pair of 1970-1971 New Year’s Eve shows at Graham’s fabled Fillmore West and Winterland venues. I was all of 14, but my broad-minded parents thought it would be fine for me to attend one of these concerts, and my dad even offered to pick me up after the show. It was only years later, as a parent, that I appreciated what it must have been like for him to steel himself for the wee-hours drive from Marin into San Francisco and back on the drunkest night of the year. Thanks again, pops.

I chose the show at Fillmore West because I was really into Cold Blood at the time, and Elvin Bishop and Boz Scaggs were always good (the opening act, Voices of East Harlem, was a gospel-like outfit whose glorious refrains still ring in my head). The Winterland show was headlined by the Grateful Dead, with the New Riders of the Purple Sage and Stoneground rounding out the bill.

Even though I was a budding Deadhead at the time, I had just seen the Dead and the Riders (Jerry Garcia was still their pedal-steel guitar player) earlier in the year at a dumpy little dive in San Rafael called the Euphoria. The late Janis Joplin (she had died in October of that year) had joined the band on stage for a couple of numbers, including “Turn on Your Love Light.” I had never seen Cold Blood before, so off I went.

The postcard, like most of Singer’s art of the time, was based on a photo collage, whose elements included a hand, a dove, and the San Francisco Ferry Building. My copy suffered mightily from my affection for it, as its numerous thumbtack holes prove. I moved it from wall to wall in my room, and it even lived for about a year in a tree fort I had built in some oaks behind our house—thanks to a rainy winter, the thumbtack holes have rust stains around their edges, and the card’s once-vibrant colors are not as bright as the day it came off the press.

How it survived my college years, I have no idea.

“Janis Joplin joined the band on stage for a couple of numbers, including ‘Turn on Your Love Light’.

But back to the binge. A few months ago, I began an informal, no-deadline search for a Singer image I had always coveted, BG-242, which advertised four July 1970 performances by the Quicksilver Messenger Service, Mott the Hoople, and Silver Metre. Framed in blue, the central black-and-white photo collage featured a solar eclipse in the background with a crown formed by a droplet of milk at the bottom. Within the crown, a man with outstretched arms appears to be surfing or skateboarding, but without a board beneath his feet. I had always thought of this as the Silver Surfer poster, probably because of the repeated ‘silver’s on the bill, but I’m probably the only one who calls it that. When I found a copy of the postcard that was reasonably priced and in decent shape, I snapped it up.

Then, last month, I went to The Rock Poster Society’s Festival of Posters in Golden Gate Park. The society’s newsletter (I’m a member) had promised that David Singer would be there to sign posters. I’d heard he charged a modest fee (as it turns out, his is less than most), so I decided to bring my battered copy of BG-263 for him to autograph.

Many people who bring posters and postcards to events for ’60s poster artists like Wes Wilson, Victor Moscoso, and Stanley Mouse to sign are doing so to enhance the value of the piece in their collections. That’s not a bad thing, but it’s also why the artists don’t feel bashful about charging people for their John Hancocks. But when I showed Singer my fragile keepsake, and told him its tale of love and woe, he just smiled warmly and said, “I’m not going to charge you for this.” He saw immediately that this little piece wasn’t going to be showing up on eBay anytime soon.

While we chatted, Roger McNamee, who, along with U2’s Bono, is one of the founders of Elevation Partners, wandered by. “David’s the best,” he exclaimed, “the best!” McNamee has kept Singer busy producing some of the most intricately beautiful posters of Singer’s career for a band McNamee fronts called Moonalice. People attending Moonalice shows get a free poster, just like back in the day. I’ve got a couple of those, too.

Last week, I added one more Singer to my growing collection. It’s a version of BG-287, the poster Singer created for Fillmore West’s closing week in the summer of 1971. It’s not one of the rare posters from the run of 500 that was produced after the show. Rather, it’s the thin-stock version that was folded into sixths and packaged with the three-LP-set of recorded highlights from that extraordinary week. I don’t mind that it’s folded, that’s part of the piece. And if it’s a bit frayed around the edges, it’ll fit right in with the rest of my collection.

As for my Singer wish list, that’s topped by the first poster Singer created for Graham, BG-178, which advertised two shows from June of 1969. It’s classic Singer, and classic Bill Graham—in one improbable pairing, Woody Herman and his Orchestra play warm-up for The Who, who were performing “Tommy” at the time. Three bucks got you in the door.

Was Levon Mosgofian of Tea Lautrec Litho the Most Psychedelic Printer in Rock? 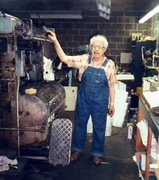