Today’s guest blogger is camera collector John Kratz, whose Flickr page is a thing of beauty. John has posted a number of his cameras on Show & Tell, too. 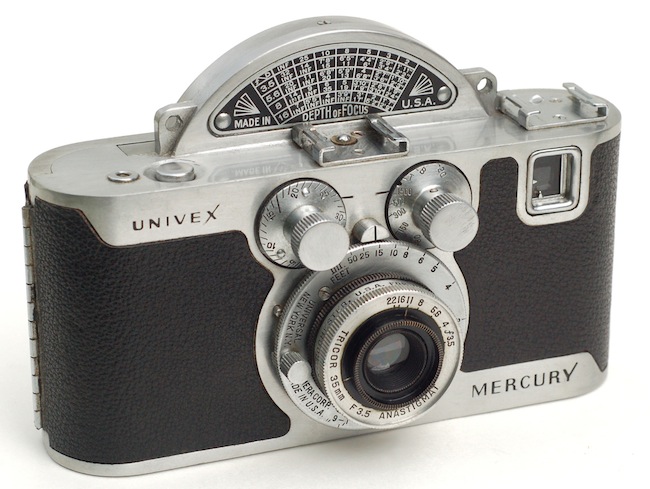 The Universal Camera Corporation found great success in the early/mid-1930s by selling very inexpensive cameras and film. By the late ’30s, however, the camera-buying public was increasingly interested in high-end imports such as the Leica and Contax lines—the simple plastic still cameras offered by Universal up to that point were no competition.

Universal rectified the matter in October of 1938 with the release of the Univex Mercury (Model CC). Cast from an aluminum alloy and covered with leather, the Mercury was not only unlike anything Universal had offered before, it was actually a revolutionary achievement in the industry. I won’t go into all the features, but two are worth noting: First was the unique rotary shutter (responsible for the circular protrusion on top of the camera), capable of extremely accurate speeds up to 1/1000th of a second. Second, the Mercury was the first camera to have internal flash synchronization, known today as the hot shoe.

German-made cameras from Leitz and Zeiss were selling for hundreds of dollars, making the American-made Mercury a very appealing alternative at a mere $25. Nonetheless, producing America’s fastest candid camera did not satisfy Universal, as the Contax II claimed a shutter speed of 1/1250. Thus, in June of 1939, Universal introduced the Mercury Model CC-1500, named after its top shutter speed.

For collectors, the CC-1500 is a rare find, as only an estimated 3,000 were manufactured, compared to approximately 45,000 of the standard Mercury Model CC. The example pictured above is equipped with a Wollensak f/3.5 Tricor lens, and sold new in 1939 for $29.75. The camera was also available with a Hexar f2.0 lens (rare today), an option that more than doubled the price of the outfit to a whopping $65! 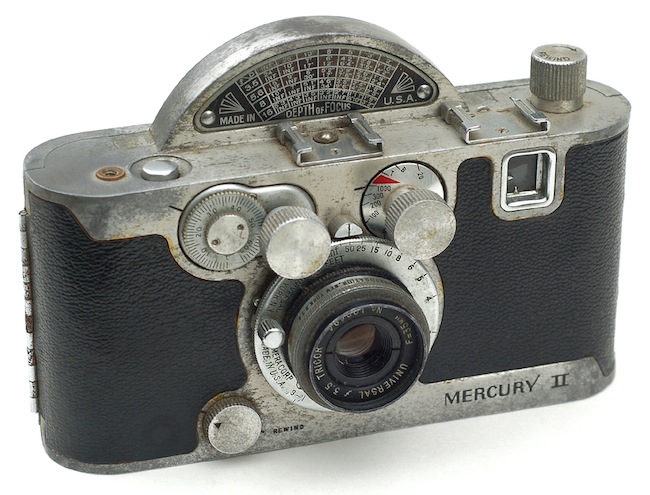 The Mercury II (Model CX), above, was a postwar reincarnation of the Mercury I, manufactured beginning around 1945. Universal Camera Corp. suspended its normal camera-making operations during World War II in order to produce binoculars for the armed forces. By the time the war ended and Universal resumed camera production, the company had decided to revamp the popular Mercury in order to allow it to accept standard 35mm film rolls, as opposed to the special Univex #200 film required for the Mercury I. This required new dies, resulting in the Mercury II being about a quarter-inch longer and taller than the Mercury I.

Aside from the addition of the rewind knob and other obvious physical differences between the Mercury I & II, two cosmetic changes became somewhat problematic. The Mercury II was made from an alloy that quickly lost its luster, making clean examples difficult to find today. Also, the Mercury II was covered with a synthetic material instead of the leather found on the Mercury I. This may have necessitated the use of a different adhesive, as most examples of the Mercury II have what looks to be glue that has oozed out at the edges of the covering. Despite these issues, the Mercury II was a popular camera in its time, and is prized by collectors today.

Dawn of the Flick: The Doctors, Physicists, and Mathematicians Who Made the MoviesFrom Ambrotypes to Stereoviews, 150 Years of Photographs

CamerasAntique and vintage cameras are valued by collectors for countless reasons,…