Cyanide, Uranium, and Ammonium Nitrate: When Kids Really Had Fun With Science 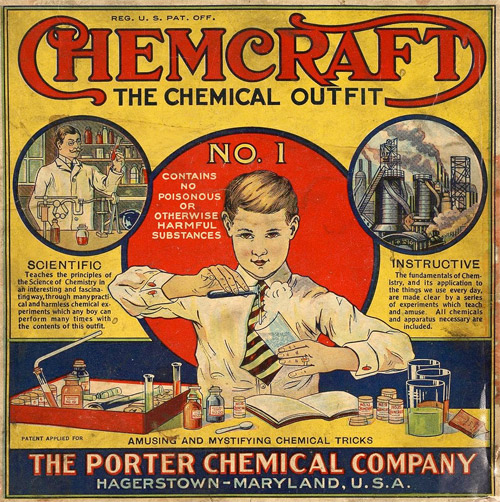 Here we are, in 2011, a.k.a. “The Future.” We’ve made leaps and bounds in science that we couldn’t even imagine 50 years ago. You’d think the science toys of our age would be mind-bending in their ability to awe and inspire young chemists and biologists. Instead, kids today are being protected within an inch of their lives, while adults apparently live in dread of unsupervised children running amuck with the powers of modern science at their tiny fingertips.

So how do these new educational toys compare to those made back in the days when science offered hope and inspiration for a better tomorrow? We take a look at a sampling of science toys vintage and new and—very unscientifically—decide who’s winning in each case, the past or the present. 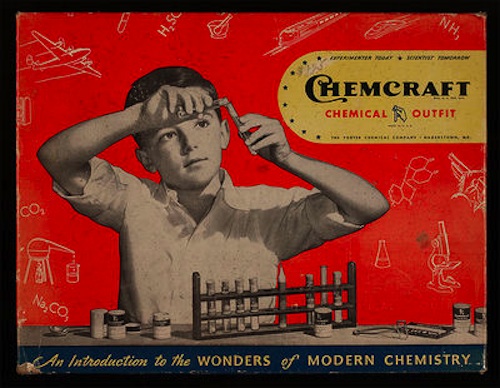 Most lovers of science are all too aware that chemistry sets have gone down the tubes, particularly in the last decade. Sites like the 12 Angry Men blog have bemoaned how modern chemistry sets expose kids to little more than low-energy experiments that produce changes in color. This spring, the JAYFK expressed outrage at what appeared to be the last straw: The Chemistry 60 set (photo via JAYFK below), whose packaging boasts “60 Fun Activities With No Chemicals.”

The irony is that these 60 activities—including growing crystals, growing plants, making bubbles, and creating “slime and gook”—do, in fact, require chemicals. What the makers mean is that their set has no dangerous chemicals. No acids, no explosives, no alcohol, no poisons.

The concept of a chemistry set can be traced to the Victorian Era, when scientists were discovering and expanding upon atomic theory: Boys (never girls) were encouraged to tinker with the known elements on the periodic table. In 1914, American chemist John J. Porter produced the first line of chemistry sets for boys called Chemcraft (see examples at top and above), which was purchased by Lionel Toy Corporation in 1961. His toy was such a smash, that a few years later, science fanatic A.C. Gilbert, maker of Erector Sets and, later, American Flyer model trains, put out his own. At the time, it was understood these kits were not just fun toys full of magic tricks but tools to groom young men for careers in science. 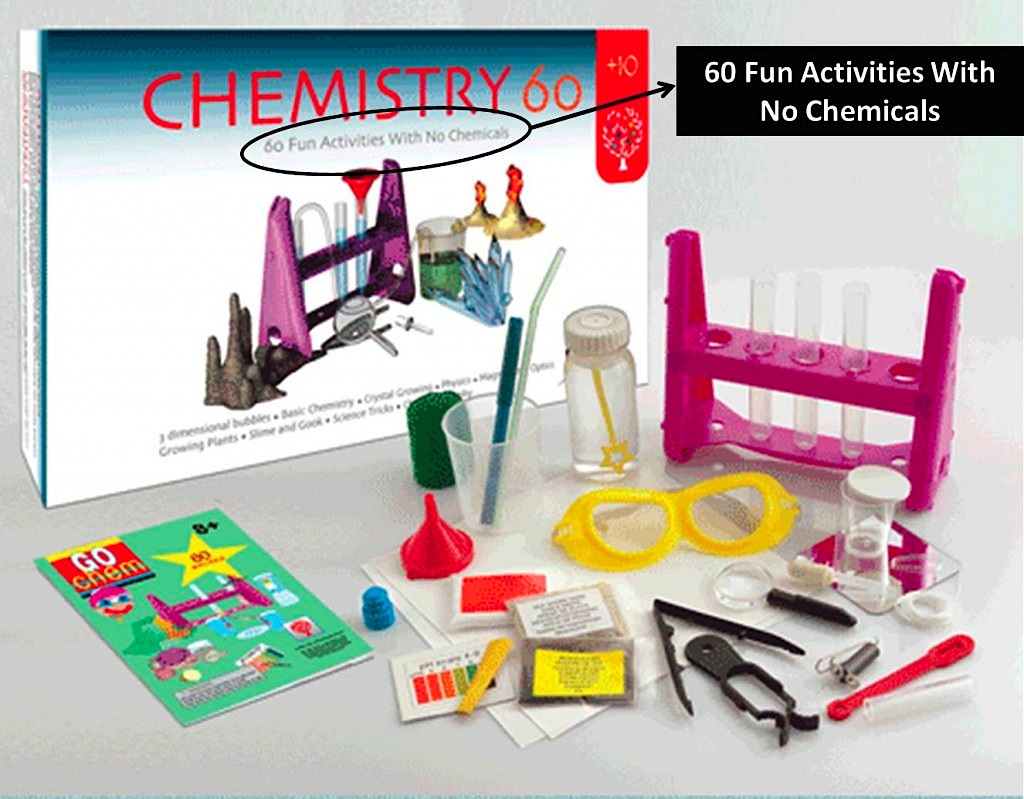 World War II revealed the endless, life-altering possibilities of chemistry, from the life-saving potential of new plastics to the apocalyptic power of the nuclear bomb. By the end of the 1950s, even young women were getting in on the act. While girls had been allowed sets like Chemcraft’s Sachetcraft that let them make their own perfumes and cosmetics, Gilbert put out its first “Laboratory Technician” set for girls in the late ’50s, which contained mostly a microscope and prepared slides.

Early chemistry sets had all sorts of dangerous substances, which for kids meant they were fun. Potassium nitrate, for example, is used in gunpowder, fireworks, and rocket fuel, while nitric acid (also used in rocket fuel) and sulfuric acid are highly corrosive. Sodium ferrocyanide, which reacts with iron ions to create a Prussian blue dye, is now classified as a poison (thanks to the “cyanide” part). Calcium hypochlorite could be mixed to create free chlorine gas, which wreaks havoc on the human respiratory system. Ten-year-olds could make things go boom, build their own batteries and engines, or bend glass with alcohol lamps. Having parents who would teach them lab safety was supposed to be an important part of the learning process.

However, in the ’60s, parents began to express their concern about the risks, as new laws required labeling for materials that are flammable, explosive, toxic, or caustic. Gilbert and Chemcraft began offering kits that offered only “non-explosive” and “non-toxic” chemicals. These early regulations, while perfectly sensible, were the first steps toward the slippery slope that led to today’s “chemical-free” chemistry sets. 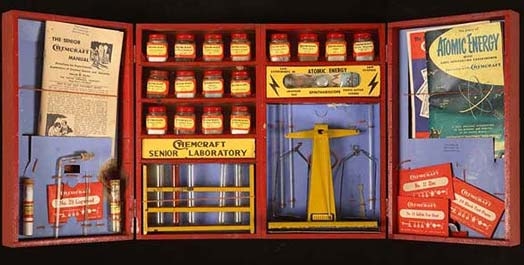 Understandably, most parents don’t want their children handling known carcinogens or, say, battery acid. That said, the pendulum has swung to the other extreme where kits no longer contain Bunsen burners, or even glass test tubes, beakers, or flasks. Why is that? We can thank three post-modern horrors: Meth labs, homegrown terrorism, and liability lawsuits. Litigation has made manufacturers reluctant to market anything remotely risky to children, even glass. Many metals in their elemental form—such as lithium, red phosphorus, sodium, and potassium—are highly regulated by the FBI, as they can be used to produce meth. And anything that could be used in a bomb, like ammonium nitrate (fertilizer), faces intense scrutiny by the Feds.

Hence, we get namby-pamby sets that have real chemists fretting that kids might just think science is a yawn. As an alternative, Make magazine and Wired Geek Dad encourage parents to use the Internet or pick up “Illustrated Guide to Home Chemistry Experiments” by Robert Bruce Thompson to put together their own DIY chemistry sets for their budding mad geniuses. 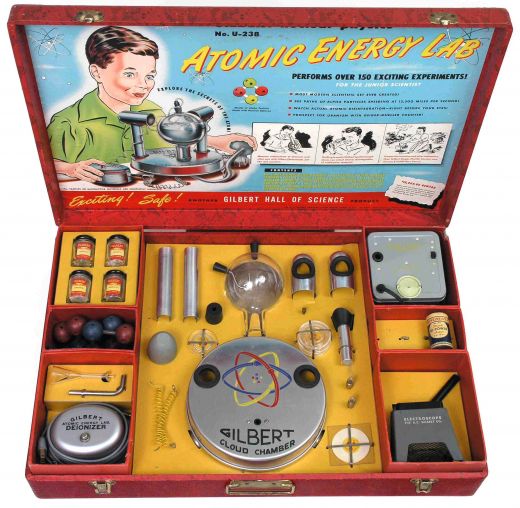 While some substances banned from chemistry sets are not dangerous when handled properly, no one wants to go back to the days when kids were allowed to play with uranium. In 1951, Gilbert released an “Atomic Energy Lab,” which contained three “very low-level” radioactive sources (alpha, beta, and gamma particles), a U-239 Geiger counter, a Wilson cloud chamber, a spinthariscope, four samples of uranium-bearing ores, and an electroscope to measure radioactivity.

Fortunately, this expensive kit—in today’s dollars, it would cost the equivalent of $350—was not a big hit for Christmas that year, and production ended in 1952. Back in the day, some may have naively believed radiation to be harmless or beneficial, but we now know exposure to the U-238 isotope is linked to cancer, leukemia, lymphoma, and even Gulf War syndrome. Those are experiences with science no one would wish on a child. 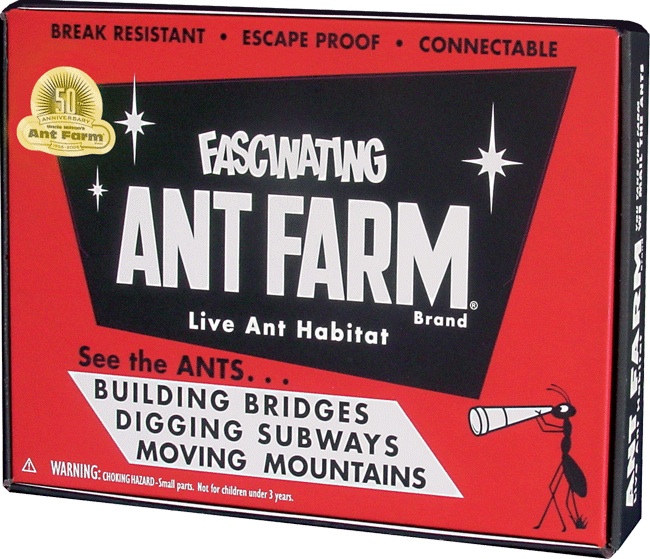 Up until 1956, hand-made “formicariums,” or ant habitats, could only be found in classrooms and natural history museums. The man who made the “ant farm” a household object was not a scientist. A sergeant of an engineering platoon in World War II, “Uncle” Milton Levine returned home and founded a mail-order novelty company with his brother-in-law, Joe Cossman. Their earliest products included animal balloons, plastic shrunken heads, and dwarf tree kits. They sold plastic toy soldiers and potato guns advertised on the back of comic books. 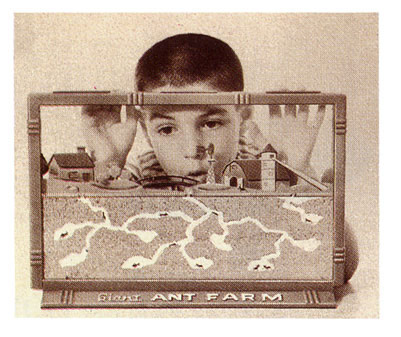 Then, at a 1956 Fourth of July barbecue, Milt noticed ants scurrying in and out of a crack in a swimming pool, and remembered how ants had captivated his imagination as a kid. His company’s first mail-order ant farm kits were just a plastic box, a bag of sand, and a vial of live ants. Right away, Milt and Joe were swamped with so many orders, they realized they’d have to hire “ant pickers.”  They replaced the sand with volcanic gravel and developed a standard plastic habitat with an above-ground farm scene carved by an engraver. When ant farms were offered in stores, Uncle Milt had to figure out how to make sure the ants that came with them were still alive. Hence, the slogan, “You Take the Farm, We Mail the Ants.” 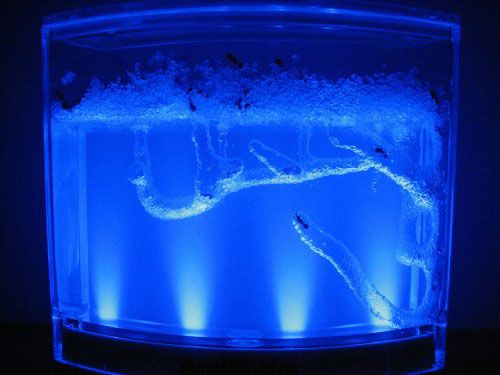 While getting living creatures in the mail is always cool (think Sea Monkeys), in 2003, ant farms went to the next level. That year, NASA developed a special semi-transparent gel (available in neon blue, red, or green) that contains all the nutrients ants need to survive, so astronauts could study the critters in space. These AntWorks art farms are lit from below with LEDs, making the formicarium look more like a decorative panel at a trendy space-age dance club, and completely unlike any place animals naturally live.

In 2006, though, old-school gravel ant farms made a comeback as Uncle Milton revived the vintage look for its 50-year anniversary. Just this year, the beloved innovator passed away.

So which is better, studying the habits of ants in old-fashioned sandy barnyard charm or trippy, otherworldly goo? Tough call. 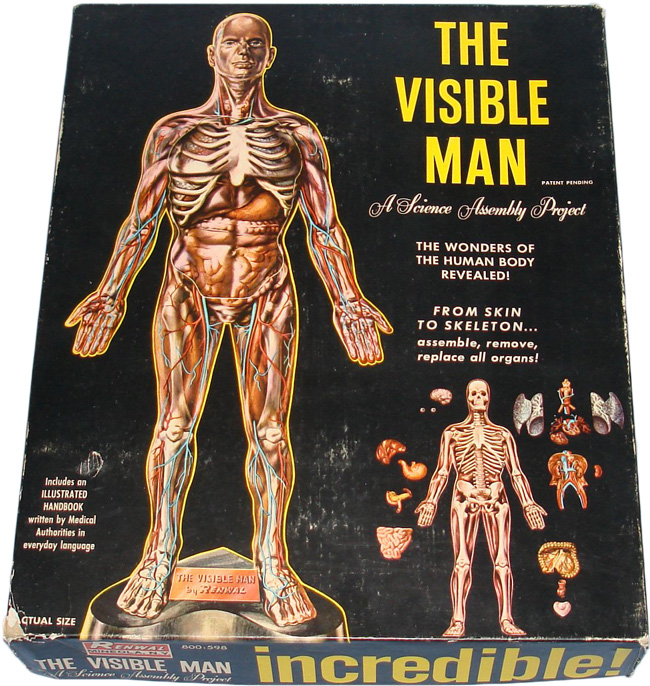 What could be more fun than poking around in someone’s (or thing’s) internal organs? Whether you’re the sort of person who called in sick on dissection day, or the kid who eagerly sliced that frog open, you have to admit Visible Man is cool. Let’s start with the fact he doesn’t smell like formaldehyde—always a bonus. The first one appeared in 1958, when a company named Renwal introduced a 16-inch clear plastic model of a human man that came with a full skeleton and a set of internal organs. Children were encouraged to paint the model’s guts and assemble it his or her self.

Naturally, Visible Man had many imitators, but he was the original, and his molds are still in circulation, used by Revell in the ’70s, and Skilcraft starting in the ’90s. In fact, Visible Man was so popular, he had many spinoffs, including Visible Woman, Visible Horse, Visible V8 engine, Visible Chassis, and Visible Wankel engine. 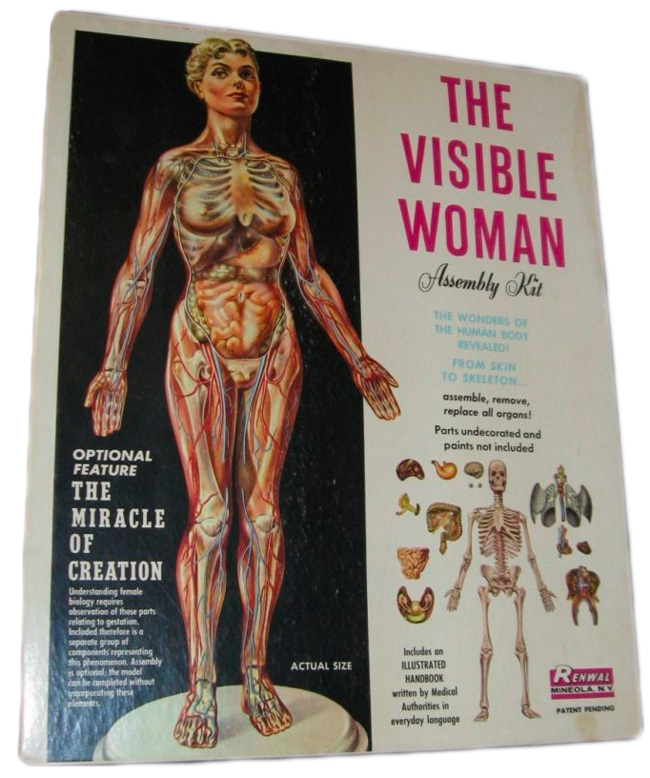 Visible Man and Woman made quite a pair. Visible Man, like his less transparent brethren, the Ken doll, lacked external genitalia. Visible Woman, on the other hand, was quite sexy on the Renwal box, with perky breasts and her eyebrow coyly arched. Still, her uterus was completely optional. The copy on the box did quite a bit of linguistic gymnastics to avoid and apologize for any connection to sex; in the ’50s, it was still verboten to let children know exactly how babies are made. It reads, “Optional Feature: The Miracle of Creation. Understanding female biology requires observation of these parts relating to gestation. Included therefore is a separate group of components representing this phenomenon. Assembly is optional; the model can be completed without incorporating these elements.” 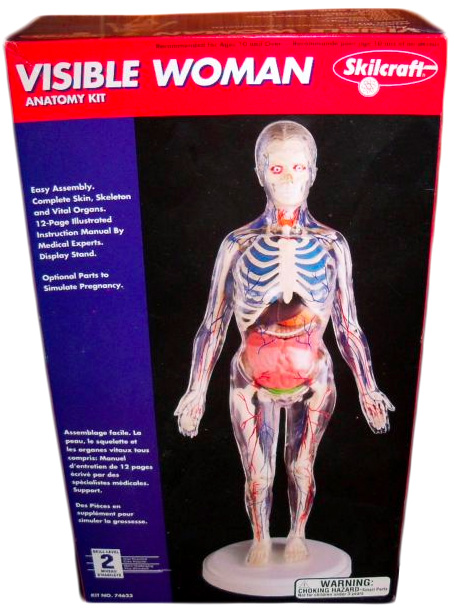 Nostalgia buffs rejoice: Skilcraft is still producing these toys using the exact same molds, sans external genitals. But the sales pitch on the box is less coy about the whole bun-in-the-oven thing. Visible Woman today looks less like a pin-up and more like a haunted house skeleton—as she should—and the box plainly states, “Optional Parts to Simulate Pregnancy.” Even though the old and new toys are basically the same, I’m going with the miracle of modern sex education. 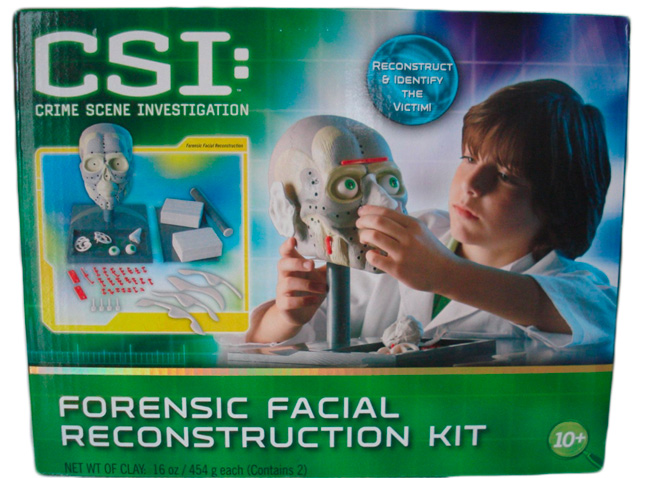 Sure, our grandparents may have been cool with their kids creating explosions in the garage, fiddling with uranium, and studying the squishy insides of the human body, but somehow I doubt they’d want their children going over the details of a grisly crime scene. So what if our “chemistry sets” have lost their edge: Thanks to popular TV shows like “CSI: Crime Scene Investigation,” “NCIS,” “Bones,” and “Law & Order,” preteens these days are well-versed in the intricacies of forensic crime labs. Why not let them have a go at sleuthing through science?

The CSI Crime Scene Forensic Lab by Planet Toys, for example, lets young ones analyze blood and hair samples, study paper chromatography, and take fingerprints. The CSI DNA Lab even comes with a working centrifuge, an electrophoresis chamber, and a three-speed motorized lab for studying the double helix. My personal favorite of the CSI line is the Forensic Facial Reconstruction Kit, which combines the the concept of Visible Man with the modern-day forensics craze. It’s creepy. It’s scientific. It’s artistic. You can make all sorts of disturbing-looking people, perhaps even someone you know. 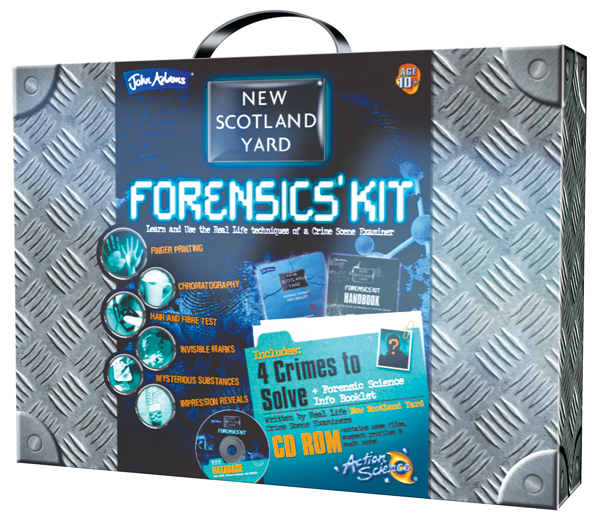 Other toys let kids made impressions in clay, dust for fingerprints, and collect material in “evidence bags.” John Adams in England, for example, offers the New Scotland Yard series. Nonetheless, forensics toys are ghoulish enough to make science fun again. Isn’t that what it’s all about?

What do you think? Are science toys better or worse now?

From Boy Geniuses to Mad Scientists: How Americans Got So Weird About Science

Cowboys vs. Spacemen: How the Toy Chest Was WonSea-Monkeys and X-Ray Spex: Collecting the Bizarre Stuff Sold in the Back of Comic Books