This article discusses the packaging used for early American consumer products, describing some examples and noting their intrigue. It originally appeared in the December 1942 issue of American Collector magazine, a publication which ran from 1933-1948 and served antique collectors and dealers.

One of America’s famed industrial designers sat at his quite modern desk (which he thinks was designed in 1936 but which was already old stuff in 1836) and, with his nose well in the air, vented his pontifical spleen upon an humble chap who had suggested Early American designs for use in plastic materials. It was utterly silly, he said. Foolish. Thoughtless. A material as modern as plastics required, deserved, and would get “modern design.” 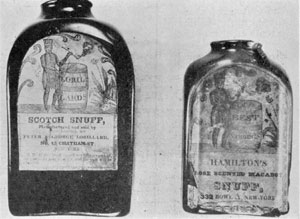 Two Snuff Bottles: One of these represents the oldest of today's tobacconists. Snuff was also sold in wooden boxes with the name of the snuff or the vendor branded in or affixed as a printed label.

Nothing daunted, the humble man pulled from his pocket a little box. “This is plastic,” he said, “and early American. It is made of gum-mastic, India rubber and carbon black. It is a Daguerreotype case. Made in 1840. It is one of over two hundred, all different designs made in that year. And the dies from which they were molded are among the finest plastic molding dies ever cut anywhere.”

The industrial designer hemmed and hawed. His face turned red. He just remembered an important lunch date. But now that designer is an indefatigable searcher into things and designs early American. He still seeks two books to complete his library. They are The Application of Art to Industry by George C. Mason, New York, 1858, and The Practical Draughtsman’s Book of Industrial Designs by William Johnston, Philadelphia, 1865. 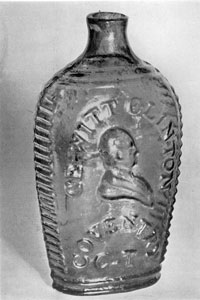 DeWitt Clinton Flask of Coventry Glass: A liquor container with horizontally ridged, non-slip sides. This design, considered modern in 1933, actually dates back more than a century.

The arts of the paper stainer, japanner, stencil cutter, engraver, lithographer and typographer were called upon, from 1760 onward, to contribute to the appearance of American packaged goods offered for sale at retail. The Nostrum makers (and their name was legion) were adept at making the pill box at least attractive, no matter how nasty in flavor were the contents. Powder makers, collar, chocolate, glass, pin and glue makers; spice merchants, hatters, milliners, and furriers; hosiers, drapers, ink makers and soap chandlers; in fact anybody who had anything to sell, outside the staple line of goods, packaged his wares as best he could. And some of these bests were very good indeed.

Accomplished artists were commissioned to design labels and boxes. Jewelers had cabinetmakers produce the walnut, cherry, and mahogany boxes which housed their baubles. Sometimes the jeweler’s name was engraved on an ivory panel inlaid in the box.

Swank. Taste. Judgment. Finesse. The early Americans used all of these in their packages. Pickled oysters in stone pots. Brandied peaches in glass jars, hand blown in 1850 but fooling the glass experts by sixty or more years in all guesses as to their age. Coverlets in boxes covered with wall paper. Tiny wax matches in boxes so exquisite they vie with postage stamps as miracles of engraving, made and packaged in Brooklyn! 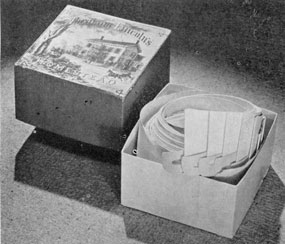 A Post Bellum Collar Box: This container with paper collars still within, displays a colored print of Lincoln's home on its cover. The box is of paper and was made in 1868.

The history of almost every traditional American product, categorically at least, can be collected in early packages. Helena Penrose and J. H. Edgette once owned a hatbox for a stovepipe beaver that was shaped exactly like the hat. It was covered with paper you’d like to have for your drawing room today.

In my own collection (assembled from odds and ends picked up at shops and shows for a few cents or a few dollars per item) there is an “almond cream” cosmetic pot as good as, if not better than, any beauty cream package of today.

Also, there is a shaving cream jar to give both Mollé and Williams pause. There is a Kentucky rifle gunpowder can in bright Chinese red with a label by Catlin and a Bunker Hill pickle bottle with the Bunker Hill monument blown in it. 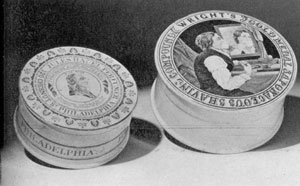 Two Pottery Containers: One of these contained Jules Hauell's Beauty Cream; the other Wright's Shaving Cream.

My friend Bruce Millar, whose History of the Walter Baker Chocolate Company is a fine piece of industrial Americana, was justly proud to picture therein a Baker chocolate package of the 18th Century. I am just as proud of a little walnut box, now filled with a dozen worn hair pencils and a few empty paint pans, but with the label of a Philadelphia art dealer of the 1820’s.

Yet there are people today, even seasoned collectors mind you, who apparently think those early Americans with enough taste to buy the furniture of Gostelowe, Goddard, Savery and Phyfe — silverwares from master craftsmen — portraits by Stuart, Copley, and the Peales — yet bought their other luxuries in the raw, like potatoes or mangel-wurzels (cow-turnips to you). They didn’t. Those early Americans bought their niceties dressed up in paper, frills, ribbands, cloth, and lace. In japanned and painted tin, in pewter, enameled and blown glass, in printed china and carved wood. And the chase for the “empties” they have left behind is as thrilling as a drag hunt in the Berkshires, or a fox chase at Radnor or Meadow Brook. 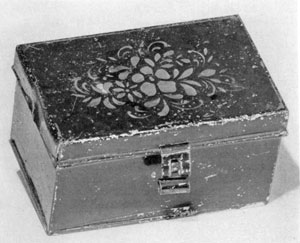 Japanned Nutmeg Box: The technique for lacquer decoration of course originated in China Out was later mastered by Occidental craftsmen. It teas a popular decoration for tin articles, large and small.

Watch your little booths at antique shows. Lurk in the nooks and crannies of antiques shops. Bedevil the owners of old houses to permit attic exploration — right out to the eaves. Dig, brothers and sisters, dig. Go after early American packages.

Some idea of the gamut available is exposed in the examples shown here. If you get no thrill from these why then, Sir or Madam, you need a stimulant, not a sedative. Try to find a full log cabin bottle of Booz best (1847) or a properly contented Coventry flask with the ribbed (can’t slip out of your hand) edges which were put there over a hundred years ago in spite of the bright lads who thought it was a “new” idea about nine years ago, and take as directed. 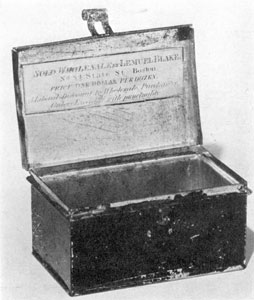 Interior Japanned Nutmeg Box: The original label is still inside the lid. It reads: "Sold Wholesale by Lemuel Blake No. 84 State St. Boston. Price One Dollar Per Dozen. A Liberal Discount to Wholesale Purchasers. Orders Executed with Punctuality."

You can collect a lot of packages and then arrange them in a cabinet, just as the old shopkeepers did. This will give you a good excuse for buying the cabinet, in case you need one. I know of one businessman who is collecting packages to decorate his office. And why not? Is there anything more stimulating to a businessman than to see what imagination his predecessors had a century ago? Is there anything more needed by business today than a return of the pioneering spirit?

Take a look at early American packages. They are free enterprise expressing itself, saying something. Even the collar box (both box and collars are of paper) of 1868, with a colored lithographed view of Lincoln’s home on it, says something. Sometimes I think our early businessmen had a firmer grip and knew more of what it was all about than our super tycoons of today.