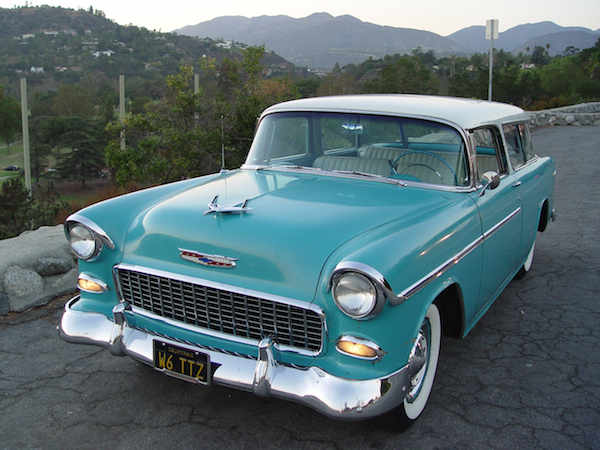 Collectors Weekly pal Justin Pinchot just sent us a video of his new pride and joy, a 1955 Chevy Nomad wagon. “It has completely original paint, interior, and drive train,” Pinchot says,  “and is so clean, I thought for sure it was a restored car until I saw it in person.” The two-door station wagon, which has been kept safe and warm in storage since 1974, has 87,000 original miles on it, and Pinchot is only its second or third owner, “depending on if you count the original owner’s son, who inherited the car.”

What sets this Nomad apart, though, from the 8,000 or so others made in 1955 is that so many of its parts are factory originals. The car has its original regal turquoise paint, with an ivory top, plus a near-perfect interior in the same colors. It’s got a factory-installed, unmodified, small-block V8 engine (“most were hot-rodded right off the showroom floor,” Pinchot says), power steering (a factory option at the time), and a two-speed, Powerglide automatic transmission. “It’s so original, it even has the ‘spiral’ Delco shocks on it. And it runs and drives like a dream.”

But the thing that pushed Pinchot over the edge from being just another drooling admirer to becoming the car’s new owner was a much smaller detail. “The seller had left me alone with the car to look it over. I was sitting in the driver’s seat, just taking it in, and it was dead silent except for a faint ‘tick, tick, tick.’ I looked over and realized that not only was the original dash clock ticking, but the time was correct! I just about lost my mind, and decided at that moment I had to have that car.”

For Collectors, Clear Is the New BlackThis 1959 Goggomobil Is Insanely Cute and Gets 55 MPG. Why Can’t Detroit Do That?

Chevrolet CarsChevrolet was founded in 1910 by Louis Chevrolet and William Durant, and qu…