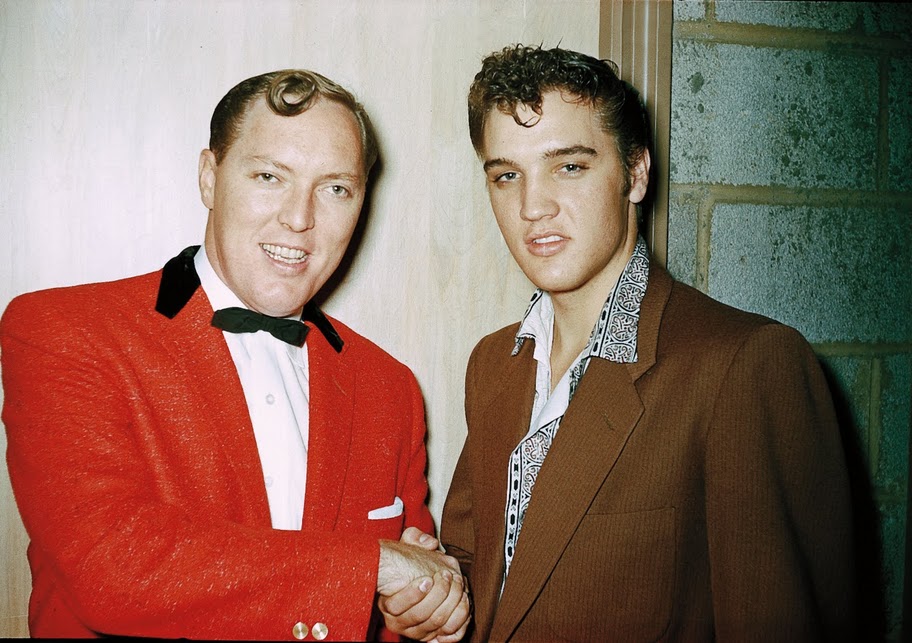 On February 26, 1955, a Cleveland deejay named Tommy Edwards became the first music promoter to book a Southern singing sensation named Elvis Presley north of the Mason-Dixon line. The event was the Hillbilly Jamboree at Cleveland’s Circle Theater. That fall, Edwards brought Presley back to the Cleveland area for several more shows, including one on October 20, 1955, at Brooklyn High School. On that date, Pat Boone was the headliner (“Ain’t That a Shame” was his big hit), with Elvis, Priscilla Wright, the Four Lads, and Bill Haley’s Comets rounding out the bill.

At some point during the proceedings, Edwards snapped a now iconic color photo of Haley and Presley shaking hands (above). Haley’s 1954 cover of “Rock Around the Clock” was one of the genre’s first monster hits. He was the established star while Presley was still the young upstart, but in Edwards’s photo, the bow-tied Haley resembles someone’s doughy uncle compared to Presley, who looks like the sort of boy you’d definitely want to keep your daughter away from.

By 1956, Edwards was showing this and his other color Ektachrome slides at the dances he promoted around town. While a slideshow may sound dull to 2011 ears, in 1956 there was no Facebook, television was black and white, and the exposure given to pop music by the mainstream press was downright stingy. For some of the kids dancing the night away in their local high-school gymnasium, a 12-foot-high blowup of Elvis Presley was as close as they would ever get to the future King. 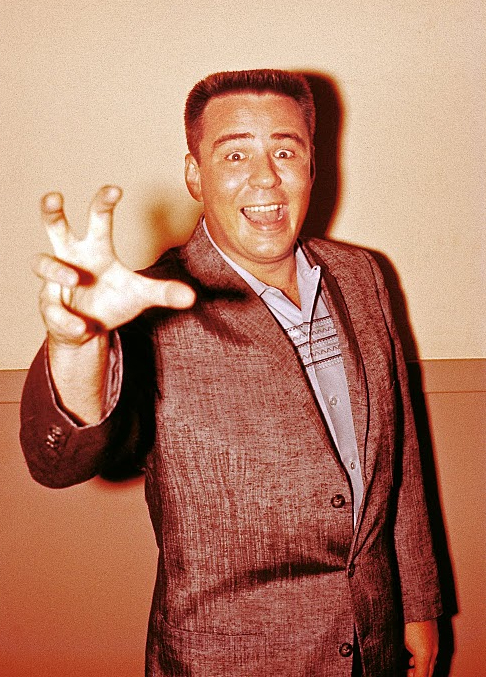 The Big Bopper in August, 1958, around the time of his big hit, “Chantilly Lace.”

According to Christopher Kennedy, author of “1950s Radio in Color: The Lost Photographs of Deejay Tommy Edwards,” Edwards did not set out to document a defining decade in rock ’n’ roll. But he was a budding documentary photographer, one with unusually good access. Between the summers of 1955 and 1960, Edwards took photos of just about every musician and movie star who passed through the studios of AM radio station WERE where he worked. His camera was a Kodak Pony.

“One of the magazines of the time did a feature on Tommy,” says Kennedy. “They took a shot of him in his photo lab at home. You’re not talking about a casual guy here. He had a lot of equipment, a lot of gear. He was into it.” 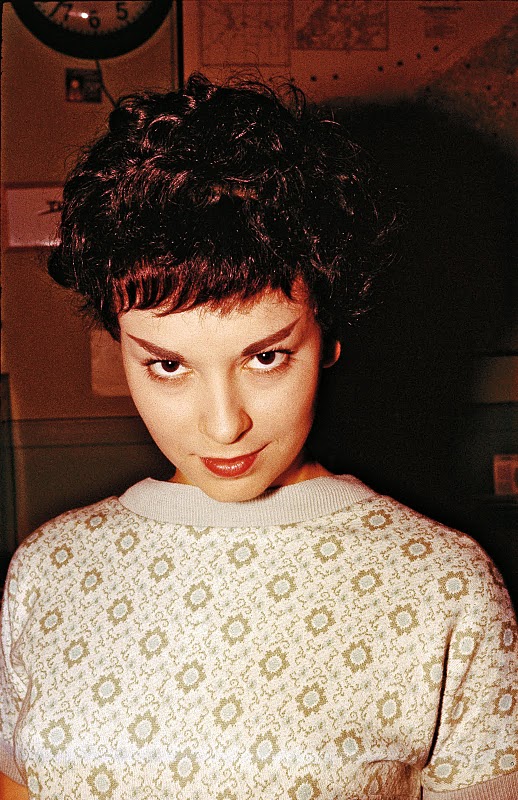 Singer Arlene Fontana, seen here in May, 1958, is one of numerous “hopeful unknowns” in Kennedy’s new book.

Kennedy’s book is a mirror of these times, showcasing the wide range of celebrities that at any given moment might have been on the public’s mind. Sure there’s Chuck Berry and Roy Orbison, Link Wray and Eddie Cochran, but the book is filled with exemplars of rock’s country roots, too, from Jim Reeves and the Louvin Brothers to Dottie West and Johnny Cash. Sam Cooke is also here, as are less famous rhythm-and-blues artists like Malcolm Dodds. “Rock ’n’ roll,” says Kennedy, “was a combination of country, rhythm and blues, and gospel, that whole fusion. Cleveland was primed for it and Tommy tapped into that. He found a niche that he created on his own. He wasn’t just some a copycat.”

Why Cleveland? “When rock ’n’ roll broke,” Kennedy continues, “they called Cleveland the gateway to the north. It wasn’t New York, Detroit, or Chicago, but Cleveland. On the one hand, you had the deejay Alan Freed playing a lot of rhythm and blues and black artists that were around at that time. And then you had a guy like Tommy Edwards, who played country for the people from Kentucky and Virginia who had migrated to Cleveland to work in the auto factories. Between the two, you had every fuse lit for rock ’n’ roll. Cleveland was primed for it, they were ready to let it happen.” 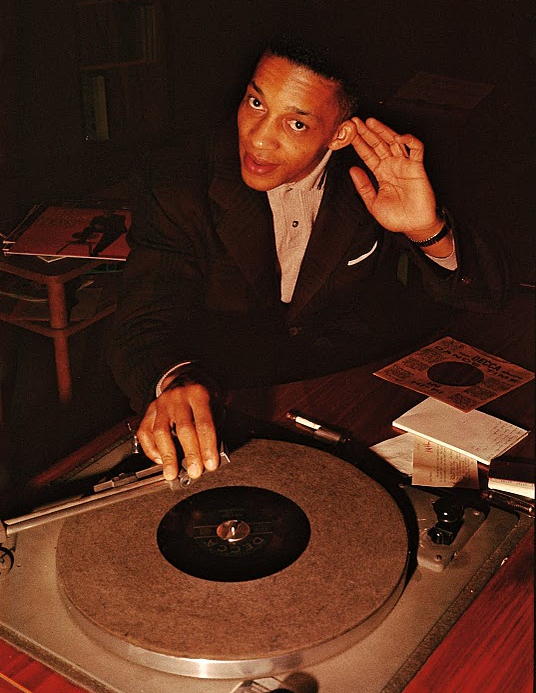 Malcolm Dodds, seen here at WERE studios in January, 1959, represents a link between Sam Cooke and Marvin Gaye.

The book’s narrative tells this story via Kennedy’s scene-setting sketches of each artist, supplemented by interviews the writer conducted with as many of the subjects as he could speak to who were still living. These nuggets are salted with excerpts from a 1981 radio interview with Edwards just before his death (in one juicy passage, Edwards recounts the day he all but caught Elvis with his pants down after a romp with a couple of teenage girls), as well as snippets culled from Edwards’s two-page, self-published weekly newsletter, which proved an invaluable companion to the 1,800 or so slides Kennedy borrowed from the deejay’s nephew.

“The book grew out of the photo collection,” Kennedy says, “because I thought they were beautiful and cool. But when the photos came together with the newsletters, I realized we had an important combination here. Edwards worked really hard at what he did, and then he died very young. This book is a tribute to him.” 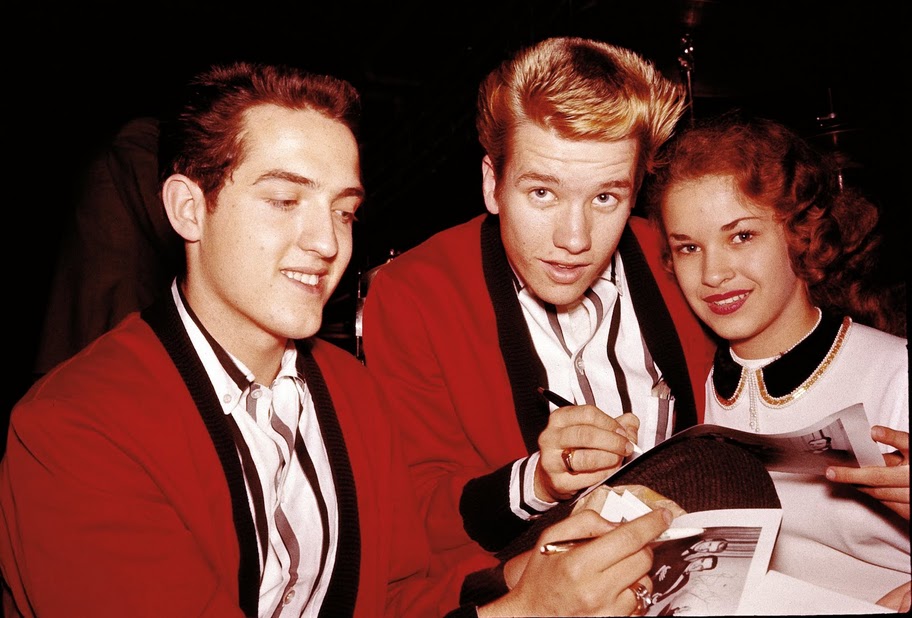 In December of 1957, the Casuals were fronted by a couple of 17-year-olds from Nashville named Richard Williams (left) and Buzz Cason (right). Here the young stars sign autographs for fans.

Picking the photos was a challenge. “Edwards photographed Eddie Cochran, Roy Orbison, and Gene Vincent,” Kennedy says. “I knew I wanted to have them in there. But I also love the Anna Marie Alberghetti shot with the old microphone because it’s just such a beautiful picture of her and that vintage equipment. It looks fresh, which is what I love about it. I didn’t want the book to be a rock oldies kind of thing because that would feel dated.”

Some of Kennedy’s favorite photos are of performers that most of us have never heard of, people Kennedy refers to as the “hopeful unknowns.” “I love the shot of Roy Hamilton,” he says, “because I’m such a big fan. Others I don’t even know who they are but the photos are just beautiful to me, like Dolores Dale laughing. I couldn’t find out anything about her, but it’s such a great picture. There are a lot of people like that in the book.” 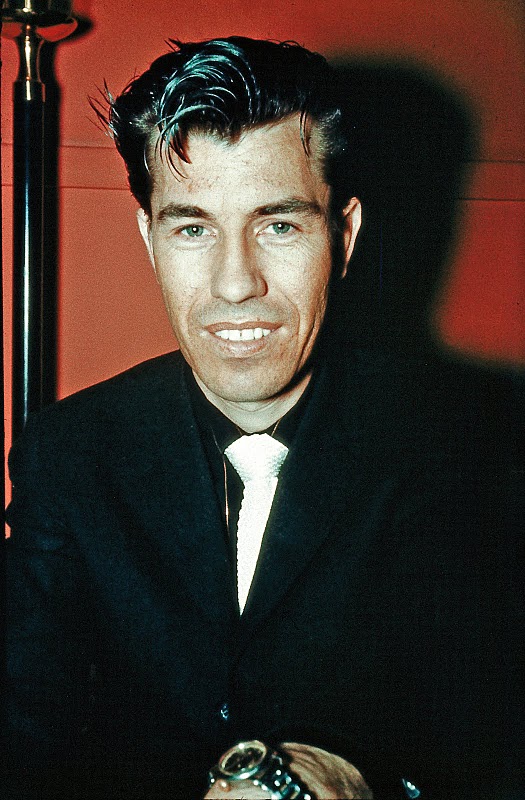 In April of 1958, “rock ‘n’ roll gangster” guitarist Link Wray was making music that would influence everyone from Pete Townsend to Jimi Hendrix.

Hollywood is also well represented (Clark Gable, Charleton Heston, Jayne Mansfield, Doris Day, to name but a few), so much so that at one point Kennedy wondered if the book should be organized thematically. But in the end, the chronological approach won. “That felt better to me,” he says, “because then you really get a feel for what a hodgepodge era the 1950s had been.” On page 103, for example, there’s a photo of a pensive Henry Fonda sitting before a WERE microphone during a 1957 publicity tour for “Twelve Angry Men.” Turn the page and there’s country singer Wanda Jackson at age 19 in a rose-colored velvet dress that her mom made her. Edwards captured it all.

As a musician and lifelong music fan, learning about some of those hopeful unknowns was half the fun of writing the book. “It was an education,” Kennedy says. “I wanted to know who these people were, so I would go on eBay and find a few Bubber Johnson 45s and get educated. Then I felt I could write about them from a more knowledgeable point of view.” 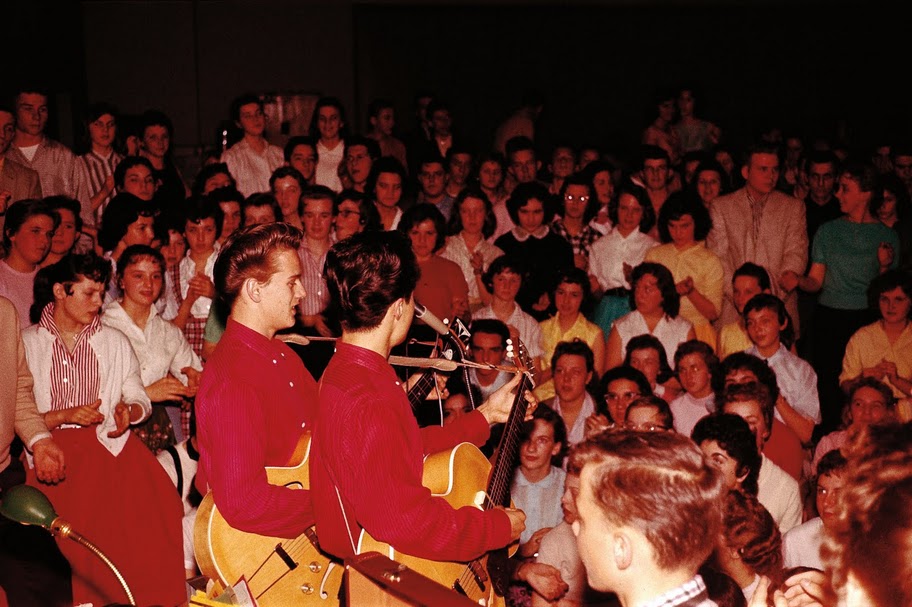 Glenn and Jerry, playing a Tommy Edwards deejayed dance in March of 1959. Admission was around 35 cents.

Along the way, he gained a few new favorites. “I just fell in love with Malcolm Dodds,” he says. “It was very difficult to find biographical information on him, but I talked to a couple of people who knew him to find out what he had been like and what he wanted out of his career. And when I heard him, he reminded me of a combination of Sam Cooke and Marvin Gaye, kind of a bridge-the-gap guy, just wonderful. I also got turned on to a lot of country people, people who maybe I should have known about but didn’t. I’m a huge Louvin Brothers fan now.”

In the end, though, the heart of the book is the story of how rock ’n’ roll pushed just about everybody out of its way, from jazzy pop stars like Bobby Darin to baby-faced heartthrobs like Paul Anka. “People were very threatened by rock ’n’ roll,” Kennedy says. “Many of the pop artists I interviewed told me that their careers ended the minute rock ’n’ roll arrived. No one would buy their records anymore. There were pop stars who tried to adapt to it, who tried to go the rock-’n’-roll route, but they ended up with this really weird, fabricated hybrid of what they thought rock ’n’ roll was supposed to be.” 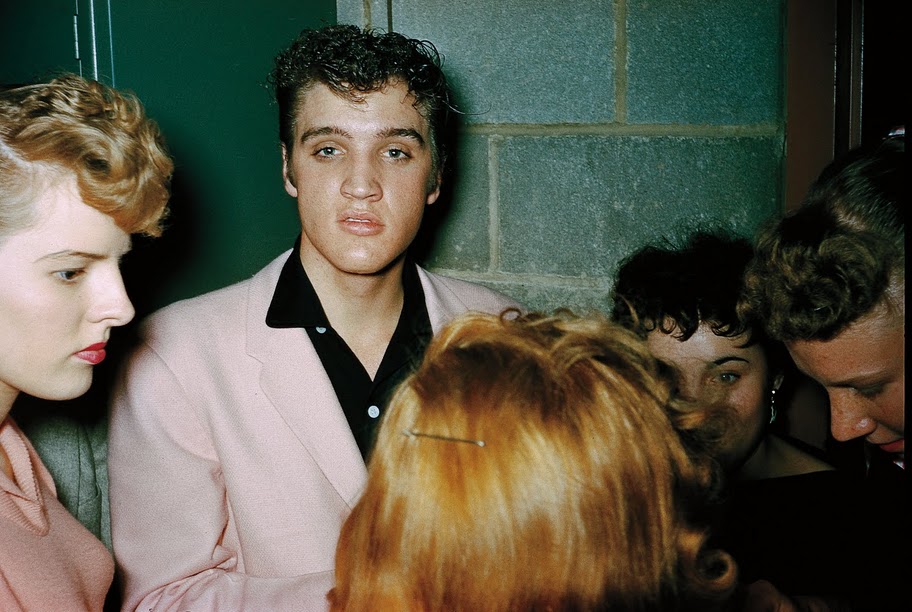 In fact, rock ’n’ roll even clobbered rock ’n’ roll, as Bill Haley found out when Elvis Presley topped the charts shortly after the January, 1956, release of “Heartbreak Hotel,” his first single for RCA Victor. “Haley didn’t know what hit him,” says Kennedy. “For a while there, Bill Haley could do no wrong. And then the whole image of rock ’n’ roll changed and he couldn’t compete, which is why I love that photograph of him and Elvis together. At that very moment, the end of 1955, Haley still was on top. And then literally within a few months, the whole ballgame changed.”

Edwards, too, got lost in the shuffle. By 1959 he had lost his gig at WERE, and he put down his camera in the middle of 1960 before spending the rest of that decade and part of the next in the relative obscurity of running a record store. But Edwards had witnessed the beginning of something great, and he used his camera and perch behind a microphone to make it even greater. Thanks to Kennedy, who tracked down his photos and pieced together the Cleveland deejay’s story, the role Edwards played will not fade away.

(“1950s Radio in Color: The Lost Photographs of Deejay Tommy Edwards,” is available at Amazon. If you buy something through a link in this article, Collectors Weekly may get a share of the sale. Learn more.)

Rockin' at the Rollarena, Pre-Summer of Love 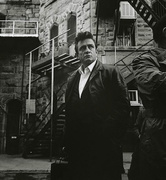