This article, written on the 500th anniversary of the invention of printing, discusses the historical significance of printing and the press, as well as its spread across the U.S., individuals important in its development, and its role during the American Revolution. This article originally appeared in the February 1940 issue of American Collector magazine, a publication which ran from 1933-1948 and served antique collectors and dealers.

Though slow in its beginning, John Gutenberg started the mighty force which rolls interminably on; the force that nations may browbeat but never conquer; that kings, dictators and even democracies may hinder but never halt – the press. 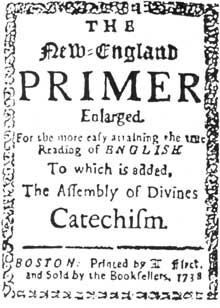 A New England Primer, 1727: This was the children's first schoolbook from 1683 to 1850. From it they learned their letters, how to read, and their catechism. Published chiefly in New England and Philadelphia. This copy was the work of S. Kneeland and T. Green.

Of printing in Mexico, beginning in 1539, and in South America in 1584, little need be said. It was chiefly religious and governmental until the nations turned to democracies in the 19th Century. Far different was the press of the northern colonies, established by Stephen Daye in Cambridge, Massachusetts, in 1639, where the first issue was a prophecy of the future, The Freeman’s Oath; the next, that guide for all households for nearly three centuries, the almanac; and then, The Whole Booke of Psalmes, commonly called “The Bay Psalm Book.”

Nor did the New England press stop here. Closer and closer it crept into the hearts of the people – an alphabet for the child’s horn book to teach him to read; a little primer that he could carry in his pocket; and then a Latin grammar.

For the grown-ups the law was the law and the church was the church, and they had to obey both; but as the laws were widely discussed and often broken, and the ministers generally wrote in no gentle terms about one another, there was plenty to excite the minds of the readers of the hundreds of pamphlets that poured from the press in that first century of New England printing.

And how the people loved the broadside, that single sheet that was posted on church doors and in town-meeting halls, the predecessor of the newspaper, the billboard, and the insert of our paper of today. 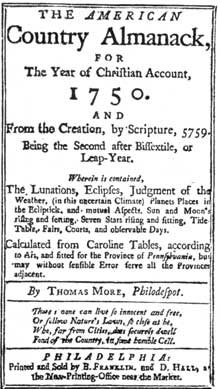 American Country Almanac: This was the successor to Poor Richard's. This issue, published at Philadelphia, in 1750, is an example of Franklin's printing at the time of his famous electrical experiments.

After the witchcraft trials of the late 17th Century had produced their shelf of controversial books there was a lull, soon broken by the newspaper and Benjamin Franklin. Both stirred things up, first in Boston, then through the Colonies, then throughout the world, and the end is not yet.

Franklin’s entrance into the newspaper field gave it such life, seriousness, vivacity, and meaning that independent thought and action on the part of the people was inevitable and as a result of that, the American Revolution. The Saturday Evening Post, that present-day five-cent assortment of fiction, articles, and advertising, stems back to Franklin, although he would have a hard time recognizing his weekly in its present dress.

Nearly fifty years after Stephen Daye started his press, William Bradford came to Philadelphia and founded the first in Pennsylvania; but Quaker influence was too much for him and he moved, in 1693, to more congenial New York. Meanwhile his agent, Reinier Johnson, carried on in Pennsylvania until his son Andrew Bradford was able to take over the business.

A quiet peaceful production of Quaker pamphlets, government controversies, and the first books printed in German in America, was succeeded by the advent of the irrepressible Franklin. His early incomings and outgoings attracted little attention, but when he settled down to earnest work in 1726, things began to hum. 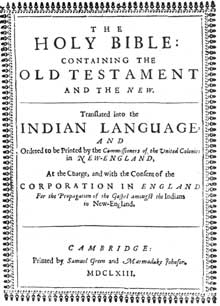 John Eliot's Bible: The first Bible printed in America. It was published at Cambridge, Massachusetts, in 1663, by Samuel Green and Marmaduke Johnson.

Franklin was one of the common, everyday people and he knew how to handle them. First he fooled them, as he had done in Boston; then he told them funny stories, sometimes moral, often not; and finally he gave so much good advice to saint and sinner that he was and still is quoted throughout the world. Apparently he was the first chain-store printer for, as soon as his own success was assured, he established printing plants in New York and New Haven with James Parker as a partner; in Newport with his nephew; in Antiqua with a former apprentice; in Dominica with William Smith; and in many other places.

Incidentally, Franklin issued the finest production of the entire colonial press when he printed Logan’s translation of Cato Major in 1744. He also issued the first masonic book printed in America, The Constitutions of the Free-Masons, 1734.

But he was not the only driving force behind the press in Pennsylvania, for the Dutch and German immigration brought with it the mysticisms and theological cults that produced the weird songs and music of the Ephrata press; the first, second, and third editions of the German Bible, the first printed in America in a European language, by Christopher Sauer.

In every country house the almanac hung on the peg by the fireplace, filled from January to December with farm entries of births of children and calves, of the number of pigs and cows, of the gala days when father went to Philadelphia or Lancaster, of rain and snow; and now and then of the laying to rest of a little form neath the rounded mound in the churchyard. As the colony grew the newspapers and broadsides were scattered from Philadelphia to Fort Pitt, sometimes causing border warfare and often preventing an Indian attack.

America Seeks Its Independence: The first accounts of Lexington and Concord and Isaiah Thomas' first Worcester, Massachusetts, imprint. He fled from Boston to Worcester in 1775. There he made a fortune by mass-production printing and, in 1812, founded the famous American Antiquarian Society.

Sandwiched between Yankee Boston and the Quaker village of Philadelphia was the sleepy Dutch town of New Amsterdam. After the English christened it New York, it began to wake up and at the time of the arrival of William Bradford it was quite a lively place, full of pirates, fur buyers, land-grabbers, an honest merchant or two, and one printer. Bradford liked the place. And why shouldn’t he? He printed the laws, he printed the money. But he did more, he printed the first New York newspaper, The New-York Gazette, on November 8, 1725; and he was the virtual founder of papermaking in America.

John Peter Zenger, Bradford’s young apprentice in 1711 and his partner in 1727, started business for himself in 1728, and printed the first arithmetic in New York. But what really made him famous was his trial for criminal libel, when for the first time, a little over two hundred years ago, the liberty of the press in America was maintained through the able pleading of Andrew Hamilton, and ever since has it been given the right to publish the truth no matter whom it hit.

And now a new era was approaching. The press and the people were independent but the government of the Colonies was lashed to that of Great Britain. When the Stamp Act was passed a strand of the lash began to part; the Boston Massacre broke another; the Boston Port Bill severed two or three; and the Declaration of Independence cut the last strand.

For the past fifteen years we have been celebrating the hundred and fiftieth anniversary of events from the beginning of the American Revolution to the adoption of the Constitution. But what of the press during this period? To say that it was active is an understatement. It was argumentative, satirical, sarcastic, vindictive, and vicious. 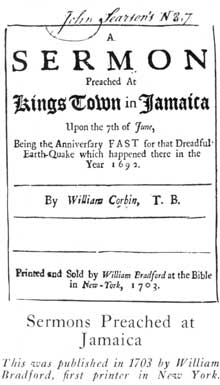 Sermons Preached at Jamaica: This was published in 1703 by William Bradford, first printer in New York.

The editor or author said exactly what he meant and if, during the war, either was caught by someone he was castigated – well, some were caught. The Tory editor, Rivington had his plant wrecked in the beginning of the fracas; and perhaps it is not too far-fetched to wonder if John Andre’s Cow Chace, ridiculing General Anthony Wayne, did not lurk in the minds of the officers of the court martial that dropped Major Andre from a limb of a tree with a rope around his neck.

Next came the itinerant printer – here today and gone tomorrow. From New York he crept up the Hudson and Mohawk valleys, stopping for a year in one place, moving his equipment in an oxcart for fifty miles and again setting his press, sometimes in the attic and often in the cellar; grabbing what little he could get and moving on with his flock of children behind him. The itinerants from Pennsylvania and all New England did the same, and they met on the banks of the Mississippi.

Lexington, Kentucky, had the honor of issuing the first newspaper of the Mississippi Valley, on August 11, 1787, The Kentucky Gazette; then William Maxwell, from New Jersey, established the Centinal of the Northwestern Territory in Cincinnati in 1793. After the turn of the 19th Century, it would require a census taker to count them. In Chicago, the metropolis of the Middle West, John Calhoun started his press in 1833.

Ever westward, ever onward, the press followed the people, often leading, sometimes obstructing the advance to the Pacific. By mule, by covered wagon, by steamer and by flatboat the press kept with the colonists. 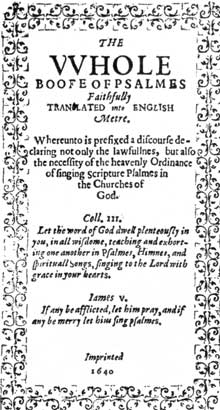 The Bay Psalm Book: Title-page of the first book printed in the present United States. Produced at the Stephen Daye press, Cambridge, 1640.

And now, on the four hundredth anniversary of the introduction of printing in America, we return to the territory of Mexico in 1834, introducing Augustin Vicente Zamorano as a printer in Monterey, California; and Jesus Maria Baca, a printer in Santa Fe, New Mexico; just to celebrate the one hundredth anniversary of printing on the western coast of the United States. Four centuries of printing in America, through settlement, conquest, independence and government; through war and peace; often wrong but generally right, the press has led the way.

Did John Gutenberg and Stephen Daye, as they turned the wheel that pressed the snow-white paper upon the black-inked type, sense the change that was to come throughout the world, and that freedom of thought and action was to take the place of medieval slavery of mind and body?

And now from every corner of the globe comes the voice of the press, often with a strange falsetto, but generally with the clarion call of truth, not only giving the latest news but also telling of the latest advances in science, education, homemaking and industry.

The record of the past has proved that the closer the press comes to the people the greater its success, but to enter the hearts of the people it must tell the truth, the whole truth and nothing but the truth.