Gliding Back to the Smiley Days of Skating

The SFGate’s The Poop just took me on a giddy trip through the wayback machine, and I don’t wanna come back. Digging through the San Francisco Chronicle’s photo morgue (from back when newspapers processed film photographs), Peter Hartlaub emerged a folder packed with smiling, giddy roller skaters from the late 1970s and early ’80s. 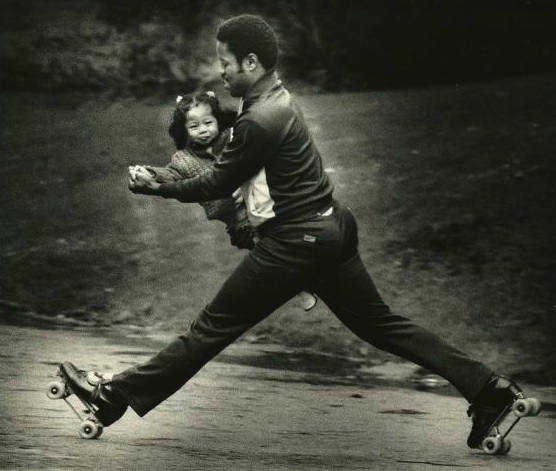 All the sunny, beaming faces prompted Hartlaub to marvel, “I forgot how happy everyone was in the 1970s and early ’80s. I don’t like to make promises, but I’m pretty sure looking through this archive find is going to make your day at least 60 percent brighter.”

That’s just how zooming around on roller skates makes you feel. Hands down, my favorite thing to do when I was a little girl in Oklahoma—more than playing Barbie, Transformers, or G.I. Joe, more than watching Saturday morning cartoons or playing Atari—was to roller skate. (In fact, it’s in my Top 5.) On the weekends, I loved to go to Skate World, which, if memory serves correct, was decorated in some sort of geometric orange-and-brown wall carpet, as was the trend. As the disco ball filled up with room with floating stars, I’d race around the rink to Michael Jackson and long-forgotten records by Foreigner, Chicago, and the Dazz Band.

It makes me a more than a little sad that, for most people, the roller disco was just a passing fad that went the way of music videos on MTV. In the early ’90s, another rink opened on the north side of town, but it wasn’t the same. The walls were sterile and white, lacking that disco-era flair, and the DJ seemed to think it was acceptable to skate to contemporary country music (it wasn’t).

As much as I loved Skate World at 5 years old, I couldn’t have known that San Francisco—and in particular, Golden Gate Park—was truly the Xanadu of my dreams. While it’s no longer the roller disco paradise of yore, to my relief, some admirable souls, like David G. Miles Jr., a.k.a. the Godfather of Skate (pictured with his daughter above), are keeping the wheeled lifestyle alive in San Francisco. Miles is founder and president of the California Outdoor Rollerskating Association, the Golden Gate Park Skate Patrol, the Midnight Rollers Friday Night Skate, The Skate Against Violence Campaign, and DMJ Inline Sports Marketing. Phew! I don’t think he’s unlaced in decades.

The other thing these pictures prove (other than the fact that feather ‘dos can be awesome) is that the current generation didn’t invent the ironic T-shirt. 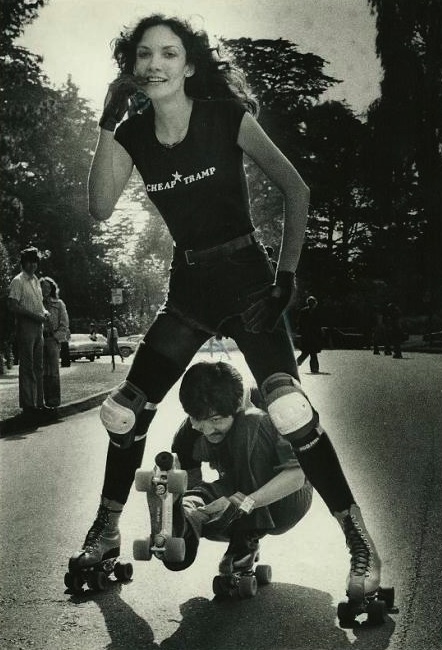 To see more of the images in their uncropped, tick-marked, and grease-penciled glory, click on The Poop.