A Guide to Christmas Antiques and Vintage Christmas Decorations 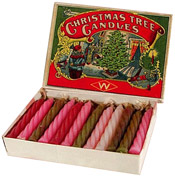 Ever wonder about that box of vintage Christmas decorations in the attic? From wooden nutcrackers to glass Christrmas tree ornaments to 1930’s Lionel model trains, this article can help you identify what vintage or antique Christmas items might be in that box. Your cherished decorations might be valuable, and even if not, you can sure have a whole lot of fun decorating with them!

Decorating the tree, like many modern Christmas traditions, was originally a German innovation. Nuts, fruits and candles were the most common decorations, and some families would later take the tree outside to share the ornaments with the animals.

Americans started decorating trees in the early 1800s, often covering them in garlands of popcorn or cookies baked in festive shapes. Christmas tree stands were occasionally made of cast iron, but more often a piece of wood was simply nailed to the tree bottom and covered with a piece of red velvet cloth. 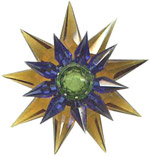 German craftsmen began producing images of fruits, hearts, stars, and angels in glass in the mid-1800s, and their popularity soared. By the 1880s American entrepreneur F.W. Woolworth had begun importing these German glass and metal treasures to his five and dime stores all across the country, sparking a Christmas ornament craze in the U.S.

Folksy, homemade decorations like textile and wooden tree ornaments also became popular around this time, and many were constructed from miscellaneous household materials like wire, pressed tin, construction paper and cardboard, often using instructions published in magazines. The handmade German ornament trade floundered after World War I, so American innovators mechanized the process, mass-producing ornaments that were sent to other companies to be decorated, often by hand. The largest such American company was “Shiny-Brite.”

By the 1930’s, Christmas had become a big business, and children eagerly awaited the arrival of Christmas toy catalogs from the likes of Sears and Montgomery Ward. Department stores set up huge Christmas trees, places for kids to meet Santa, and sweeping window displays of their toys, often encircled by a lifelike Lionel train set. All the trappings of this era — the trains, the advertising, and even the catalogs, not to mention the toys, today are highly collectible.

Although candles had long been used to illuminate Christmas trees, by 1882 one of Thomas Edison’s assistants decided to try the new electric lights for that purpose. After a decade or two of dangerous fire-causing experimental displays, the safety Christmas bulb was invented in 1917, and sold to the public in strings.

Christmas lights became popular in many shapes and sizes, like bubbling lights, figural lights, electric flameless candles, and novelty shapes like stars or hearts. By the 1950’s, most lights had taken on the teardrop shape we associate today with vintage Christmas lights.

Putz, or tiny Christmas village houses, are a longstanding Christmas decorating tradition. Often seen at the base of Christmas trees, on mantles, or atop side tables, they were introduced to the U.S. by the Pennsylvania Dutch in the late 1800’s.

Beginning as hand-carved wooden pieces, Putz villages were soon mass-produced in America, and also in Japan for the U.S. market. Japanese-made cardboard villages sold briskly in dime stores during the Depression. Today, these villages in good condition can be highly collectible.

Many Putz villages also featured a Nativity scene. Rendered in wood, cardboard, and ceramics, they almost always featured angels, shepherds, and animals, in addition to the holy family. 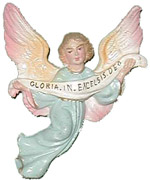 A Gloria Livaudais angel from Italy

The 1892 debut of Tchaikovsky’s Nutcracker Suite ballet established nutcrackers as a Christmas holiday tradition. Although the first hinged nutcracker is attributed to the Romans, the ones we’re familiar with were first produced by German craftsmen in the early 1800s, as functional decorations in the shapes of soldiers, kings, woodsmen, and miners.

Other iconic Christmas images which have spawned highly collectible decorative figurines and ornaments include elves, reindeer, and Christmas bells.

The story of Santa Claus goes back to fourth century Myra (now Turkey), where the kindly old Bishop Nicholas became a patron for children and the poor. Dutch immigrants brought the lore of Saint Nick to America, and through mispronunciation of ‘Sinterklass’ (St. Nicholas), Santa Claus was born.

Santa’s likeness adorns many Christmas antiques and collectibles, from toys to vintage tree ornaments to centerpieces and tiny figurines. Celluloid figurines were among the earliest such incarnations: German craftsmen figured out how to shape this lightweight, plastic-like material into simple shapes in the early 1900’s, and American and Japanese manufacturers soon followed. But by the 1930’s the market for celluloid figures faded, thanks to their inflammability.

Coca-Cola was one of the first companies to jump on the Christmas bandwagon, helping to define Santa in the process. In the 1930’s the company began producing a number of Christmas advertisements featuring Santa enjoying Coke, which helped establish Santa as a gift giver clad in red. By the 1950’s, popular ornaments began depicting Santa as shorter, with more compact features and cartoonish expressions.

Bing Crosby’s 1938 recording of ‘White Christmas’ launched a wave of popular Christmas record albums which are now highly collectible (and perfect background music for a snowy Christmas day, if you still have a turntable).

There’s a lot to choose from in this genre, from the now-rare Beatles Christmas albums to recordings by Elvis, Frank Sinatra, Gene Autry, Pearl Jam, and of course, Alvin and the Chipmunks! Not to mention the memorabilia associated with big screen Christmas movies like Miracle on 34th Street and other early films. Posters and other promotional materials from these older movies are often highly sought by collectors.

Collecting Antique and Vintage Christmas Items for the Future

So whether you consider them antique, vintage, or just fun to remember holidays past by, hang on to those decorations and hand-me-downs in that box in the attic, not to mention the new Christmas items you pick up this year. You never know what might become a valuable antique 30 years from now!