A Bookplate Junkie on the Basics of Collecting Ex Libris 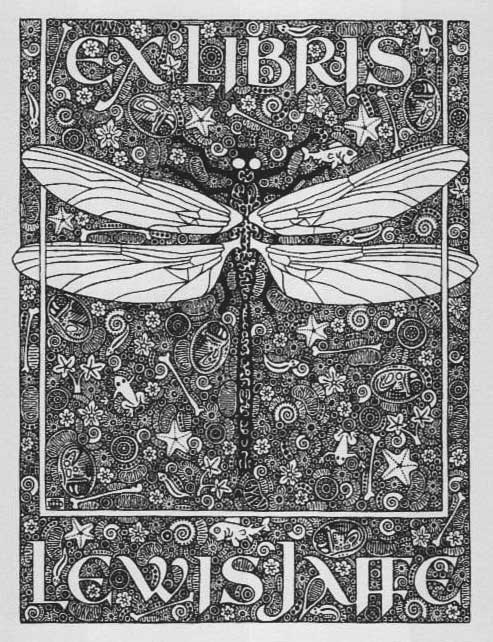 Bookplate mania peaked in America and England from 1890 to about 1920. That’s when the really great collections were formed. Most of these were eventually either dispersed or absorbed into other collections. These collections are like old friends because they all came from the same gene pool: There were around 100 collectors who actively exchanged duplicates and many of the same core plates are to be found in all the collections, and they were typically mounted on 6-inch by 9-inch card stock. Today, if there are even 200 bookplate collectors in the United States I would be very surprised.

When I started this adventure about 35 years ago there was no eBay so I built my collection without it. Today eBay offers an excellent way to find bookplates from around the world. It takes time and discipline because there is so much clutter, but it is still worth the effort. 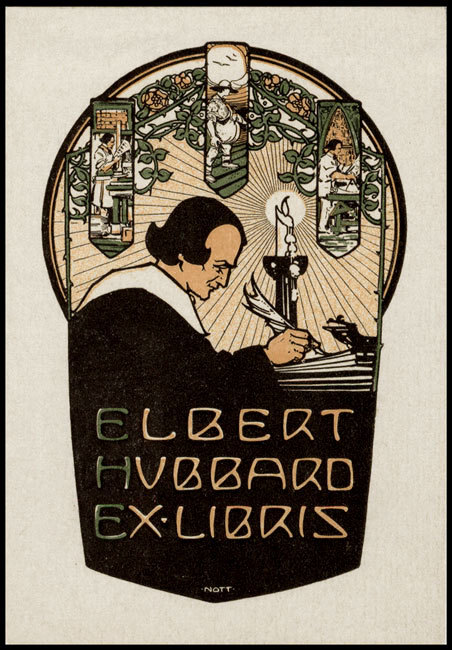 Top: One of Jaffe’s custom bookplates designed by Daniel Mitsui. Above: A bookplate for Elbert Hubbard, founder of the Roycroft community, created by Raymond Nott.

Bookplate societies are another great resource. When I first got interested in bookplates I joined both The American Society of Bookplate Designers and Collectors and the British Bookplate Society. These organizations gave me an opportunity to meet with and obtain bookplates from other collectors. It still makes good sense to join these organizations, as one of the easiest ways to build a collection is to exchange duplicates. There are over 200 individual members in the group and around three quarters have indicated a willingness to exchange bookplates.

Bookplate engravers and designers are often willing to send you a bookplate in exchange for one of yours. It’s a simple way for them to meet potential customers. Of course, you need a decent bookplate to begin with.

Antiquarian and used booksellers will go out of their way to help you if you make your interest known to them. It gets harder each year as the number of open shops decreases, and the number of pre-1920’s books on their shelves decreases. Start looking in either the poetry or foreign language sections as owners of such books seem to have used bookplates more frequently and there is often less turnover of inventory. Ask the bookseller if they keep a box of detached boards. I have found some excellent 18th century plates in such boxes.

In most large communities there is also at least one hand bookbinder. Check the Yellow Pages, Google, or ask a book dealer. More often than not they are pack rats and hold onto old bookplates, and in some instances are more than willing to sell you a cigar box full. I also buy a number of bookplates directly from dealers at book and paper shows. Once you become a regular face at these shows, dealers will save things for you. It pays to stop at every booth and ask.

I am almost embarrassed to admit that I used to look up the ages of bookplate collectors and write to all those over eighty to inquire if they knew of any collections for sale. It was actually very productive and I bought two major collections that way. For the record, I am 70, so do not bother me until 2018! I’ve occasionally gotten some remarkable bookplates by writing to celebrities, but I have not had much luck in recent years. Too much mail is filtered by assistants and, more often than not, you get a signed photo or an auto-penned label. 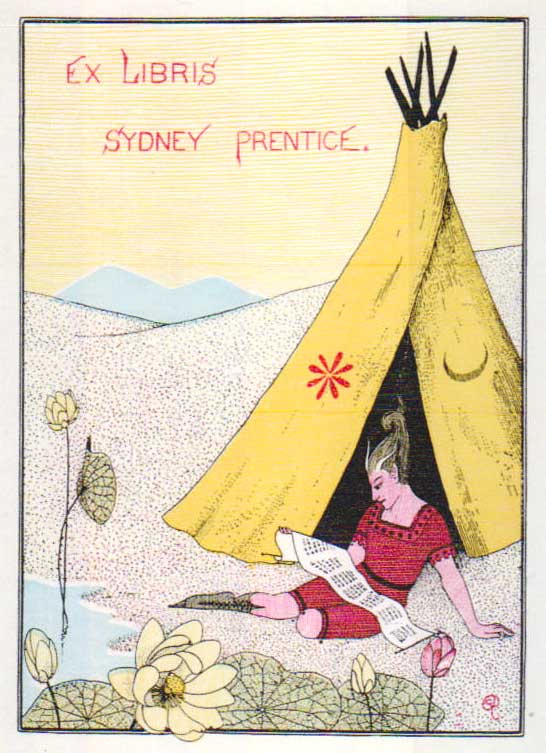 A design for Sydney Prentice featuring a teepee.

Many collectors have specialized topics and themes that they focus on. I tend to spend my time and energy searching for 18th-century American Ex Libris, bookplates from the libraries of famous people from any country, and bookplates with Jewish signs or symbols. But the list keeps growing. Rabbits are a good case in point: I started with two Rabbit plates and in the dark of night between the covers of their snug album pages they reproduced, so now I have a litter of eight. Five are domestic and three came from England. I know there are collectors out there who focus on dogs, cats, owls, stamps, chess, and even chickens.

I’ve always been partial to dated bookplates. Somehow, knowing precisely when a bookplate was engraved is very orderly and comforting. A strange choice of words perhaps, but that is my gut feeling.

Dated Book-Plates (Ex Libris) with A Treatise On Their Origin And Development by Walter Hamilton. (Three volumes, with Volume two covering the eighteenth century.)

How to Remove a Bookplate

Let us assume you purchased a book with significant historical significance, an association copy from the library of a president. It would be a crime against future generations to remove the bookplate. On the other hand, if you went to a library book sale and got a Reader’s Digest Condensed Book with a bookplate you wanted, the removal would be completely acceptable. It’s all very subjective.

Over the years I have removed many bookplates. Sometimes the books were donated to a charity, sometimes they were resold on eBay. If you want to learn how to safely remove a bookplate, I would suggest that you start by practicing on distressed items. Those with red dye should be tested first with a moistened Q-Tip, as red ink tends to bleed. From time to time you may be surprised to find a second bookplate under the one you removed. 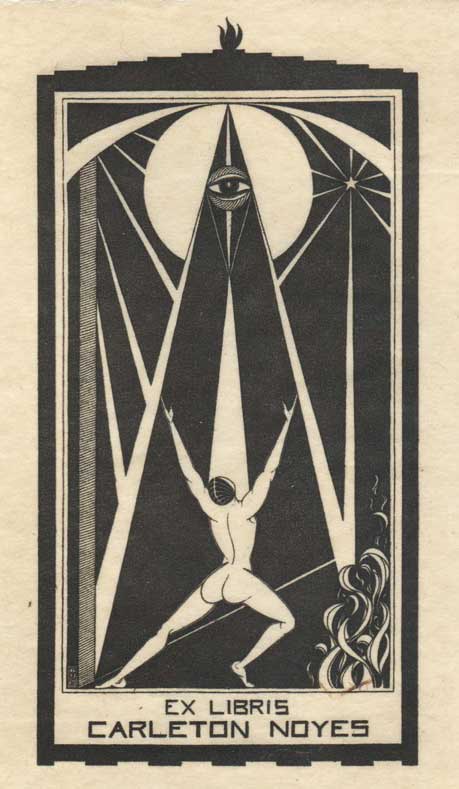 Here’s how I remove the bookplates without damaging the book:

2. Fold a paper towel in quarters and cut it slightly larger than the bookplate.

3. Using tongs, immerse the folded towel into the boiling water.

4. Place the steaming towel on top of the bookplate. If the bookplate is on the inside front cover be sure it is level. You may have to place a saucer under it to keep it level.

5. Wait two minutes and place the point of a knife under a corner of the bookplate. Lift gently and try to pull off. If you encounter resistance continue to soak another minute.

6. To avoid curling, after removal , place the bookplate between some dry paper towels, place a book on top, and let it sit for a day.

These instructions should not be used for leather bookplates, which were used by many of the wealthiest American bibliophiles in the late 19th and early 20th centuries. They are very elegant, but as a practical matter the oils in the leather tend to damage the pages they touch. Removal of leather bookplates can be done by inserting the tip of an X-acto blade under a corner and gently prying the plate upward. Most glue used on leather did not bond well and the plates usually can be removed intact.

To Catch A Thief: A Rare Book Expert on His Literary Obsessions

Naughty Nuns, Flatulent Monks, and Other Surprises of Sacred Medieval ManuscriptsFrom Donation Bin to Sotheby's: How a Rare 19th-Century Bible Almost Got Away 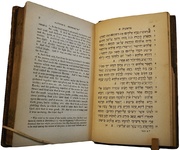 BookplatesBookplates, also known by the term ex-libris, evolved over centuries from s…