This article discusses the characteristics of the Hepplewhite furniture design style, comparing it to other styles, and notes the limited information available about George Hepplewhite and his wife, Alice. It originally appeared in the February 1938 issue of American Collector magazine, a publication which ran from 1933-1948 and served antiques collectors and dealers.

Great as was the impact of the Hepplewhite style on furniture design in both Great Britain and America during the last 15 or 20 years of the 18th Century, the man whose family name it bears remains little more than a shadow. Despite more than a half century of research scarcely a half dozen documented facts have been uncovered. 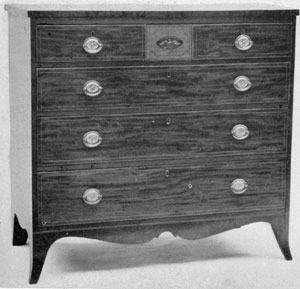 American Hepplewhite After 1800: This chest of drawers bears the label of Michael Allison, New York cabinetmaker who worked from 1501 to 1523.

He was born in provincial England, Durham and Lancaster both claim the honor; by 1760 he had his own cabinet shop on Redcross Street, Cripplegate, London; he was a member of the London Society of Cabinet Makers; died in 1786 and left enough property so that his wife applied for letters of administration in connection with which she rendered two executive’s accountings.

There definite information concerning George Hepplewhite ceases. Not even The Cabinet Maker and Upholsterer’s Guide sheds any light. First published two years after his death, it makes no mention of him either on the title page or in the foreword. The author is given as “A. Hepplewhite and Co. Cabinet-Makers” and the foreword states the purpose of the book in rather pompous phrasings. If George Hepplewhite had been the Building genius it would seem natural that there should have been at least a passing reference to his skill and ability.

Of course, the Guide was also excellent advertising for the handsome furniture that could be purchased at the Redcross Street shops bearing the name Hepplewhite. Possibly his widow and her associates in the business saw no good purpose served by reference to the fact that George had gone to his reward and was no longer actively interested in furniture making. Possibly he was just an excellent craftsman and his wife was the creative artist. The signature was A. Hepplewhite and Co., not Alice Hepplewhite, for London of 1788 would have rocked at the temerity of any woman who dared sign her name as author of a book of furniture designs.

Whether the designs were those of George or Alice Hepplewhite is a fine point that must remain unsettled save for the unexpected discovery of contemporary letters or the like. However, the fact remains that with the publication of the Guide in 1788; the second edition the next year the third in 1793; and ten plates signed Hepplewhite that appeared in the Cabinet Maker’s London Book of Prices, published in 1788 and again in 1793, cabinetmakers in all parts of Great Britain and in the recently established United States found a new furniture style depicted for them. Structural straight lines were consistently modified by boldly executed curves. Delicacy of line and proportion was always one of the paramount considerations and contrast and color could be added to furniture by the skillful use of other woods than mahogany, either as inlay and marquetry or as veneer for entire areas, such as drawer fronts and the like.

This new style had, of course, as its background the great wave of popularity of classic Roman motifs expressed by the architectural designs of the Brothers Adam in England and the Louis XVI style in France. There is no doubt that many pieces of furniture designed by the Brothers Adam were executed for them in the Hepplewhite shops and that at times such designs were so simplified as to make them practical. The Adelphi were architects, not cabinetmakers. At times their furniture designs required the modifications dictated by an experienced cabinetmaker before they could actually be produced.

An American-Made Secretary: Probably by John Seymour & Son, Boston, this piece decorated with crotch-grain mahogany veneer, satinwood banding of drawer fronts, and delicate lines of inlay as well as ivory keyhole plates, shows how the Hepplewhite style could be adapted by a skilled American cabinetmaker.

Throughout the guide certain definite characteristics of structure and ornamentation are to be found that are distinctive features of Hepplewhite furniture whether executed in English or American cabinetmakers’ shops. Structurally each piece has a marked delicacy and grace of line and proportion. At the same time, the design is a skillful combination of straight lines and sweeping curves boldly executed.

As with Chippendale, mahogany continued to be the principal cabinet wood but in the Hepplewhite style this rich, red-brown was given added color and contrast by the extensive use of the rarer light-colored woods, such as satinwood, holly and so forth, for marquetry in inlayed panels. For further contrast, some pieces were decorated with finely done painted designs. This reached its height in pieces made of beautifully grained satinwood and the whole decorated with painted ornamentation done in a wide range of colors.

Relatively few American Hepplewhite pieces were made entirely of satinwood. Our cabinetmakers often used it for decorative veneer and had at their command another light colored wood that they used almost as effectively. This was maple, either curly or bird’s-eye. Some of the most successful pieces, particularly those of New England origin, were the result of the contrast between mahogany and fancy-grained maple.

Turning to the Hepplewhite plates for accurate information concerning the furniture designs found there, one discovers that these are much more in the nature of working drawings than those in the Chippendale book. Each piece is completely recorded as it should be made; the Director, on the other hand, suggests as many as four different decorative treatments for a single piece. Obviously the Hepplewhite plates were easier to understand and explains why so many pieces of contemporary furniture duplicated them.

Card Tables, American and English: That at the left is of American make and is all of satinwood with painted decoration. At the right is an English table also of satinwood with the decoration done with inlay of contrasting colors. Both have the Marlborough or spade foot.

The Cabinet Maker and Upholsterer’s Guide especially emphasized chairs. There are thirty different designs shown, including one of a wing armchair, which if seen outside its pages, would most certainly be called Queen Anne. With chair backs, the Guide is outstanding in variety of decorative treatment. Of these the shield-back is the most original and most numerous but there are other designs that make use of an oval back decorated with three boldly executed ostrich plumes, known as Prince of Wales feathers. Also, there are several chair backs shown in which the lines of the design are primarily straight and frequently considered Sheraton in style.

Along with the chairs, particular attention is paid to stools of which there are five designs as well as six of a more or less new furniture item, the window stool. With all these chair group pieces, careful study shows that the Hepplewhite style employed either the graceful tapered leg that might or might not be terminated with a Marlborough or spade foot, or a turned leg that was sometimes decorated with delicate reeding. Therefore the somewhat fixed idea that chairs with tapered legs are Hepplewhite and those with turned and reeded legs are Sheraton is not in accordance with the designs depicted in the Guide.

Of the seven sofa designs at least two are more angular than is the general conception of the Hepplewhite style. Two others are designed in the extreme French manner. One, called a “confidante,” is very elaborate; the other, termed “duchesse,” is really a chaise lounge.

Only two of the six sideboard designs conform to the present day conception of a Hepplewhite sideboard. The other four, since they lack drawers and other compartments and are straight in outline, are more like the sideboard tables of the Chippendale and Adam periods. The knife box designs introduced an accessory that began to be made in the urn shape during the Adam years of furniture design in England, a period lacking in American furniture for the very good reason that it corresponded practically to the time of the Revolutionary War which, because of the nature of the conflict, precluded the making of fine furniture. The Guide shows both urn-shaped and box-shaped knife cases. With the latter, the slanting top and boldly curved front are particularly Hepplewhite in feeling.

As we know it, the Hepplewhite chest of drawers is distinguished by the French splayed foot, curved apron and bow or serpentine front. All are to be found in the Guide designs as well as others in the Adam manner and one or two distinctly French in inspiration. Plate 76 shows two chests of drawers, one with a serpentine and the other with a bow front typical of many made in both England and the United States.

On Plate 60 are two card table designs that were widely copied both in England and America. They are of the double top construction with one of the legs swinging out to support the top when laid flat. One is a design for a half-round table; the other for the oblong shape with rounded corners. Again on Plate 62, under the designation of “Pembroke Tables” are shown two drop-leaf tea tables, typical of the recognized Hepplewhite style. But one will seek in vain for a design of the dining table in three parts. Yet tables of this sort were made.

Hepplewhite Chairs as Made in America: No. 1, probably made in Baltimore, is almost an exact copy of a chair on Plate 7 of the Guide; No. 2 is an unusual form of the shield-back chair and bears the label of John Shaw, Annapolis, Md.; No. 3, a typical chair with heart-shaped back; No. 4, a Philadelphia-made chair with shield-shaped back; and No. 5, a Boston chair employing the Prince of Wales feathers in the oval back.