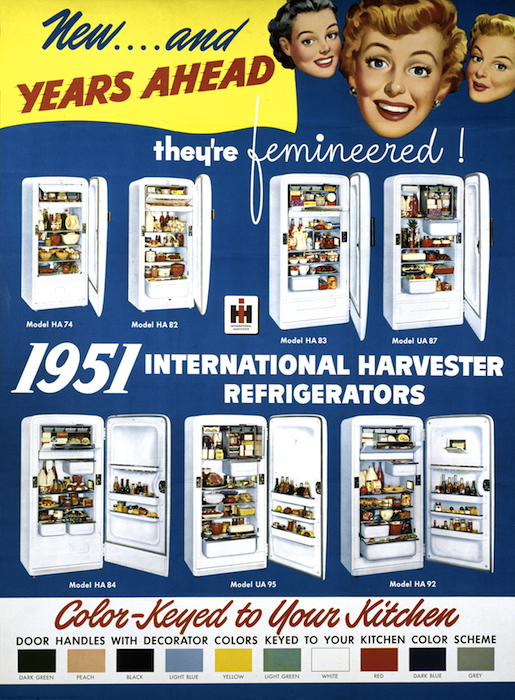 In 1935, when President Franklin Delano Roosevelt created the Rural Electrification Administration, almost 90 percent of America’s farms lacked power. When darkness fell, millions turned to fire for illumination. During harvest months, with no electricity for refrigeration, countless farmers’ wives and daughters devoted a good chunk of their waking hours to pickling and canning fruits and vegetables for the coming winter. But by the end of World War II, only half of rural Americans spent their evenings bathed in candlelight, and by 1950, that percentage was halved again. The majority of the American heartland was finally on the grid.

“They hired good, educated, Midwestern girls, gave them cars, and let them loose across the Midwest.”

For farm-equipment manufacturer International Harvester, this newly electrified population represented an enormous business opportunity. The firm was already selling tractors and other machinery to male farmers—what if it could leverage its existing distribution system to sell refrigerators and freezers to all those farmers’ wives? In fact, that’s exactly what the company did in 1947, when it unleashed an all-woman sales force and a newly created, Betty Crocker-like persona named Irma Harding to peddle its new line of home appliances to rural women. As one of the 70 International Harvester home economists once put it, “We were all Irma Harding.”

The story of this unusual branding and retail history is just one of the subjects covered in “Canning, Pickling, and Freezing with Irma Harding,” a new 256-page recipe and instructional how-to book by Austin, Texas, author Marilyn McCray. In it, amid the step-by-step illustrations for canning everything from peaches to peas, are nostalgic images of Irma and her sales-force surrogates. Meanwhile, the book’s 124 new recipes, collected and created by McCray, tap into the current craze for retro cooking techniques, especially pickling, from classic dills to regional delicacies like watermelon rind. 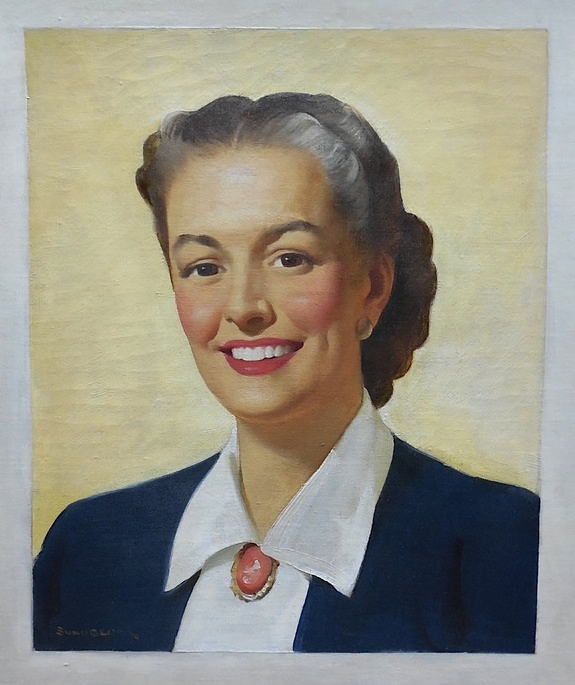 Above: A portrait of Irma Harding by Haddon Sundblom, who also gave the world Aunt Jemima and the Coca-Coca Santa Claus. Top: The same year IH was crowing about how its refrigerators were “femineered,” the company was more than a quarter billion dollars in debt.

McCray was a little girl the first time she learned to can and pickle. “My great grandparents lived outside of Grand Junction, Colorado,” she says. “Grandpa John had been an engineer on the Denver and Rio Grande Narrow Gauge Railroad. He was also an avid gardener. Granny Pearl did all the things women did in the 1950s. So, when I was a kid, and we would go stay with them, I helped in the garden and kitchen.”

That’s when McCray was introduced to the probiotic properties of pickling, in which vinegar is used as a flavoring as well as a preservative, retarding the growth of harmful bacteria. “It was cucumbers and the usual fare,” McCray says of her early canning and pickling experiences, “whatever Grandpa John grew in the garden, Granny Pearl would put up.” 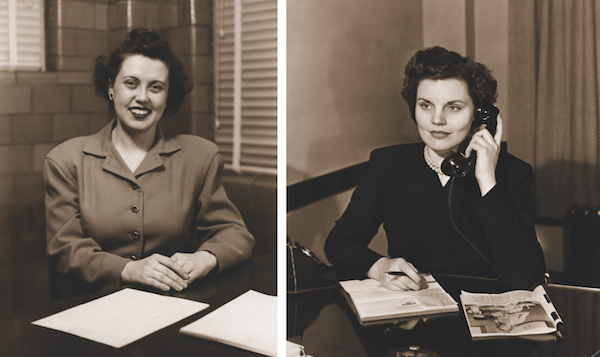 Will the real Irma Harding please stand up? At left and right are Zelma Purchase and Olive White of International Harvester, the two women cited most often for inspiring the Irma Harding character.

In retrospect, the notion that a tractor company would want to get into the home-appliance business, let alone be able to parse the subtleties of pickled watermelon rinds, seems fanciful. Indeed, International Harvester’s roots go back to the 19th-century McCormick reaper—in the first half of the 20th century it was best known for its fleets of bright-red Farmalls.

That’s about as steeped in heavy-duty farm machinery as you can get. But, says Sarah Pickett, who is the Licensing & Merchandising Manager for Case IH, “International Harvester had been manufacturing food-production equipment for a very long time. They’d been making cream separators since the late 1800s, and were selling commercial-scale refrigerated units to farmers who were producing milk and meat as a crop.” In that context, getting into domestic refrigeration must have seemed like a logical step for the company. 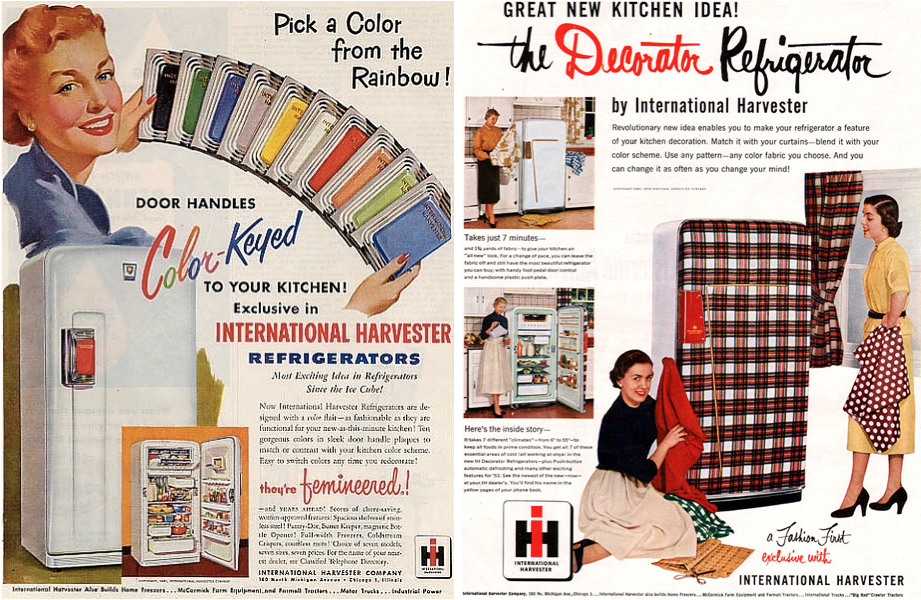 To further feminize its “femineered” freezers, IH offered “Color-Keyed” door handles and provided instructions to help users match the doors of their refrigerators to, say, their drapes.

It may have been, but refrigeration was not intuitive for many farmers wives, who’d spent the first half of the 1940s doing their part for the war effort by putting up perishables. Canning and pickling were seen as patriotic, if labor-intensive, acts. Surprisingly, perhaps, from the vantage point of the 21st century, many rural women were reluctant to discard these practices after World War II ended, which meant the benefits of newfangled freezers had to be explained on their terms. That’s why freezing was positioned mostly as a time-saving alternative to canning rather than a way to make ice cubes for mint juleps on the veranda.

“The challenge,” says Pickett, “was to introduce the idea of freezing to women who had no idea what freezing was. Otherwise they would be canning and salting and using other traditional methods for food preservation.”

Accordingly, International Harvester pushed freezing as a lifestyle change for farm wives. In other words, you’d still be able to put up your harvest, but it would require less work on the preparation side, as long as you knew how to do it right. 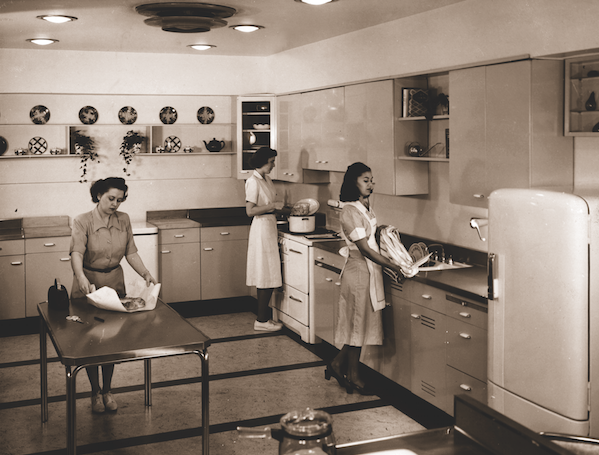 “Nobody understood that you needed to blanch green beans before you froze them,” says McCray, explaining the simplest trick to freezing fresh vegetables. “So International Harvester published recipe books and pamphlets that showed people how to take their fresh produce from the store or garden and preserve them in the freezer.”

“As one of the 70 International Harvester home economists once put it, ‘We were all Irma Harding.'”

That’s where the all-gal sales force came in. They hired good, educated, Midwestern girls, gave them cars and sales tools, and basically let them loose across the Midwest. “These women were driving around the countryside, giving demonstrations at IH dealerships, and selling refrigerators,” says Pickett. Given the constraints that were put on most women at the time, that was a pretty interesting experiment for late 1940s to mid-’50s America.

Their tool kit, Pickett says, included those pamphlets and recipe books McCray mentioned, “as well as heavy waxed-paper freezing containers that customers could buy. The containers came flat-packed, and you’d pop them open and write down when you put your peas into them, that sort of thing. They fit neatly into the freezer compartment of the refrigerator. IH made boxes, cartons, special waxed paper, sealing machines, string to put hams in—they had a raft of extras to go along with the whole freezing idea, all designed to prove how freezers would make your life easier.” 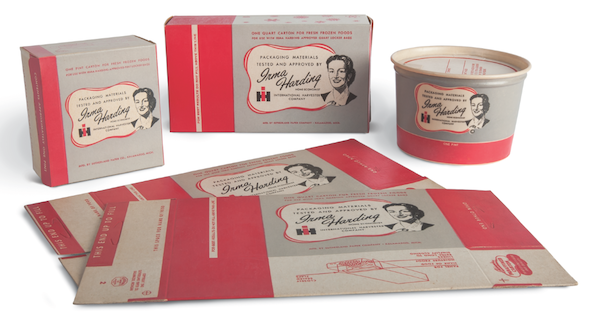 A sample of some of the packaging IH sold its refrigerator customers, to help them make the transition from canning and picking to freezing.

As the sales force’s fictional leader, Irma Harding was the company’s official face, spreading the gospel of frozen convenience. The face itself, however, belonged to a studio model named Ann Pfarr, who posed for the great Haddon Sundblom, the artist behind such American advertising icons as Aunt Jemima, the Quaker Oats man, and the Coca-Cola Santa Claus, as well as countless pin-ups and, at the end of his life, a cover for ‘Playboy.’ He did Irma Harding, too, who was rosy-cheeked but not cheeky, generous with her smile but a stickler, one sensed, for details and doing things right. In this way, Irma Harding personified the image of cordial, steady, dependability International Harvester wanted to project to its pragmatic prairie customers.

The brain of Irma Harding was a composite of perhaps five different women. Two of them are known to be Zelma Purchase and Olive White, who worked in the home-economics department of International Harvester’s Evansville, Indiana, plant, which had been built from scratch for IH’s new domestic refrigeration division. “They had a test kitchen,” Pickett says, “and there are photographs of it in magazines like ‘Harvester World,’ which was one of the company’s internal-facing publications.” As with everything else International Harvester did at the time, the company invested heavily it its new division. 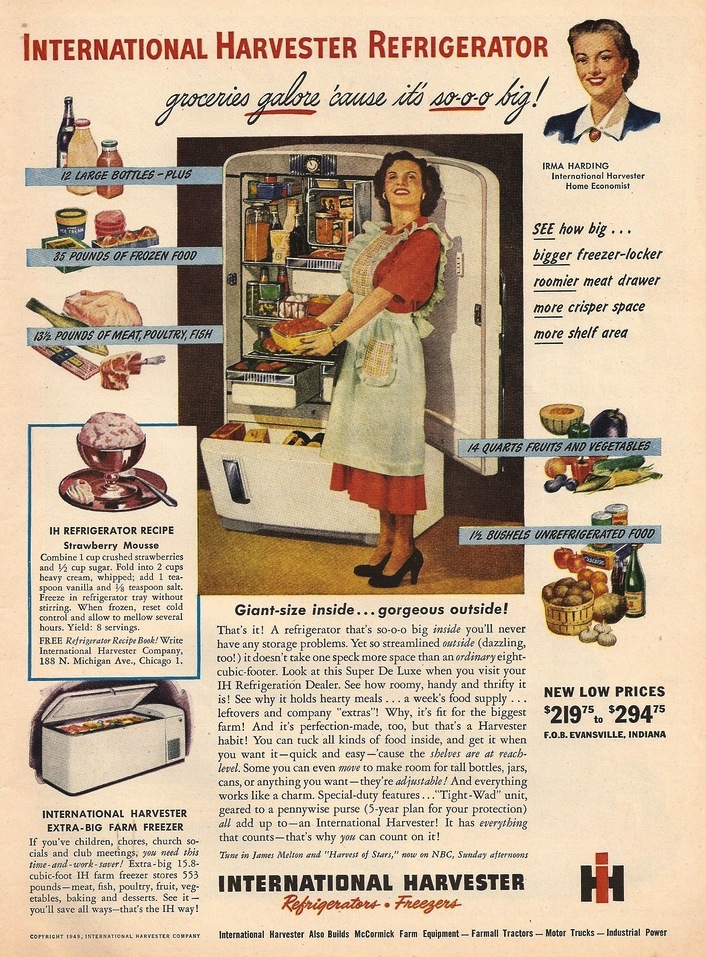 Sundblom’s Irma Harding portrait was featured in numerous advertisements, such as this one promising to hold 1 1/2 bushels of unrefrigerated food (click to enlarge).

While Pickett was interested in Irma Harding for professional reasons, she was also intrigued by the character’s sociological role, which still holds currency in 2014. “I needed an authentic identity that would appeal to the ladies who collect tractors and the wives of tractor collectors,” Pickett says. “I wanted something to represent the IH legacy that was a little more feminine. That’s what appealed to me about bringing Irma Harding back. I didn’t have to invent her, she already existed, so we dusted her off, tweaked her graphics, and fleshed out her personality, but we kept her fair-and-square attitude and the way she spoke in a forthright manner to readers of the recipe pamphlets.”

For a while, IH’s experiment with home refrigeration and Irma Harding worked pretty well, but the postwar years were difficult for International Harvester, which was beset by mismanagement—sales were climbing, but so was the company’s debt, which by 1951 had soared to $257 million. (That debt proved to be a hole that IH would never quite climb out of; in 1984, the farm-equipment part of IH was gobbled up by arch-competitor Case.) 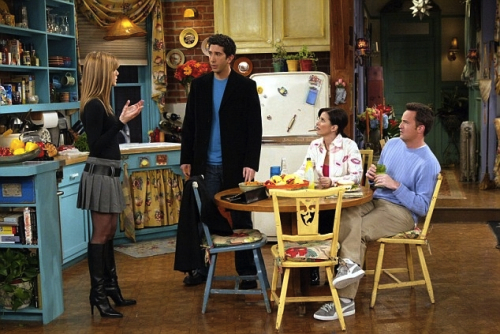 An International Harvester refrigerator sat in the background on the set of “Friends.”

By the middle of the 1950s, the shiny new plant in Evansville was beginning to look like a pretty bad idea—in 1955, IH sold the plant to Whirlpool. In hindsight, having a tractor company sell freezers to farm wives seems like an obvious mismatch, but International Harvester was at the top of its game immediately after World War II. Indeed, the reason for the failure of IH’s refrigeration division may have been that the company had not been ambitious enough. After all, their existing farmer network was only going to get them so far, and while rural electrification represented a solid business opportunity, the nation’s population was getting more urban. The cities were were International Harvester needed to be.

And so, in the end, they were—fictionally, at least. One of the most famous examples of an International Harvester refrigerator is the bulky appliance that sat in the background of Monica and Rachel’s urban apartment on the TV show “Friends.” Of course, television sitcoms are not required to play by the rules of reality. Tractor companies are, which is why International Harvester eventually pulled the plug on its refrigeration division and its fictional spokeswoman, Irma Harding. 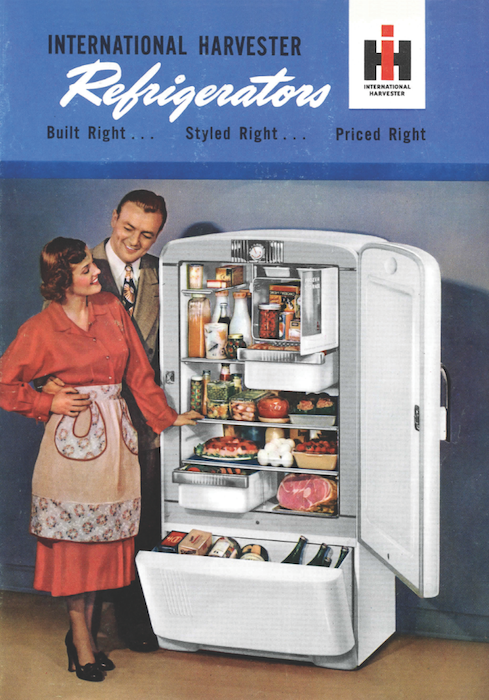 In the late 1940s, rural American women had to be convinced of the benefits of refrigerators with built-in freezers.

(All photos via Irma Harding’s Tumblr page, ShopCaseIH.com’s Pinterest page, Octane Press, and the McCormick-International Harvester Collection. To order a copy of “Canning, Pickling, and Freezing with Irma Harding,” visit Amazon. If you buy something through a link in this article, Collectors Weekly may get a share of the sale. Learn more.)

Easy-Bake Evolution: 50 Years of Cakes, Cookies, and Gender PoliticsRise of the Machines: Tractors and the End of Rural America