Lady Gaga, Innovator or Copycat? We Dissect “Born This Way” 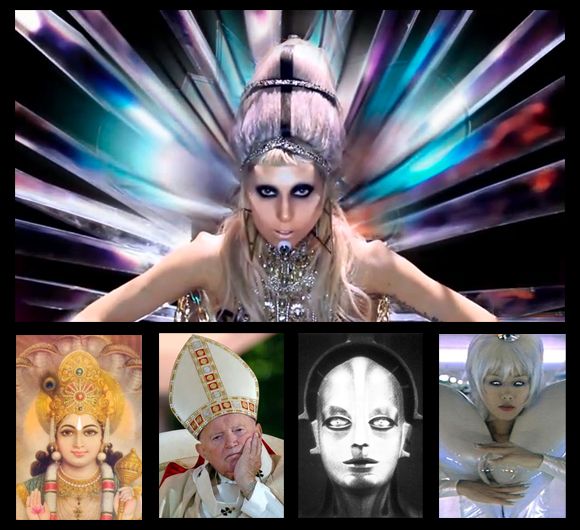 Lady Gaga has a reputation as a wildly original trendsetter. But based on the evidence we found in “Born This Way,” she’s also a mega recycler of pop-culture history.

Being connoisseurs of cool old stuff, we noticed that even her most outlandish imagery in the head-spinning video for “Born This Way” owes a great debt not only to Madonna’s “Express Yourself,” but also to works of science fiction, movie history, famous artworks, television, camp culture, and religious artifacts throughout the 20th century and beyond.

Picking up where The Atlantic and Flavorpill left off, I enlisted my science-fiction nerd and film buff friends to help me do an even deeper dive of the inspirations for the video, most of which are crammed into the first two minutes. That way, we’ll be done puzzling over it when her new visual assault, in the form the video for “Judas,” arrives on the scene Friday. 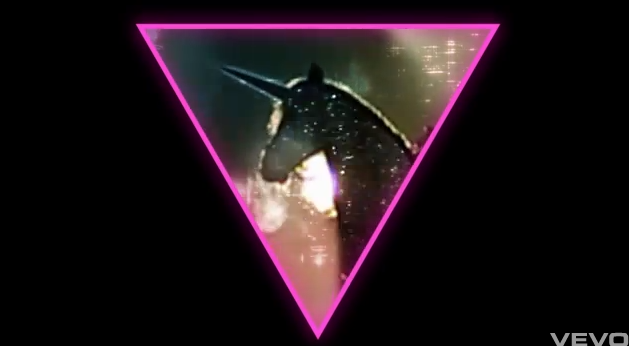 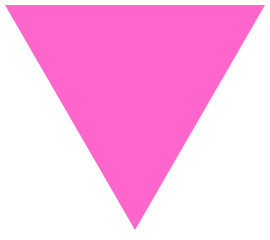 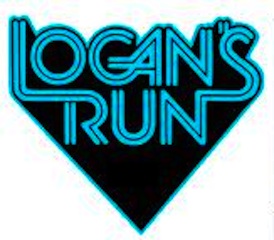 The pink triangle, worn upside down, was used in Nazi concentration camps during Word War II to identify gay prisoners. This shape also recalls the logo of “Logan’s Run,” a 197os sci-fi film about a dystopia where everyone is killed after the age of 30 (based on the sci-fi novel of 1967). The sparkly unicorn? As my friend, child of the ’80s, pointed out: “Lady Gaga is my age. She obviously had a Lisa Frank Trapper Keeper growing up.” 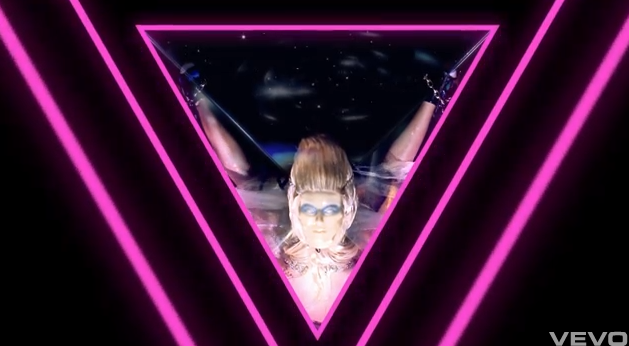 The first image we see of Gaga, she brings to mind a famous android: Pris, the rebel Replicant, from another sci-fi dystopia movie, 1982’s “Blade Runner.” The repeating Vs foreshadowing her birthing scene also call to mind the poster for the 1971 film “A Clockwork Orange”—yet another dystopia. This, of course, is more fodder for those who believe Gaga (along with most other pop stars) is a puppet of the Illuminati, a secret society they believe runs the government, the corporate world, and the media using mind control. The “all-seeing eye” and triangle motifs are used by Gaga, Stanley Kubrick, and U.S. dollar bills, and—wouldn’t you know it—”A Clockwork Orange” is all about mind control.

Also, Gaga appears to be trapped in a glass box. Is this a shoutout to the 2000 film “The Cell,” a sci-fi thriller wherein Jennifer Lopez enters a serial killer’s unconscious mind, and gets tied up in a box? Or maybe Gaga just really likes magician David Blaine. Him, or mimes. 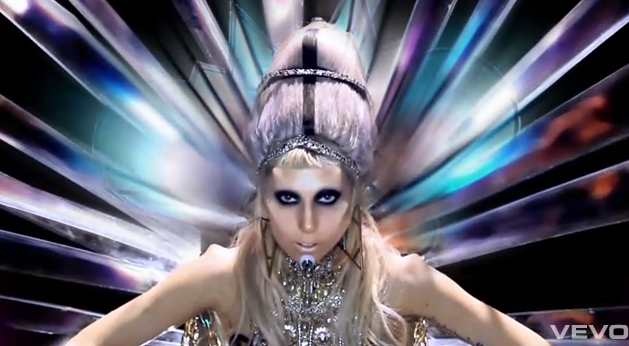 In case you missed it, Gaga is positioning herself as a deity. Before her head started shooting crystals (and Kryptonite?), you may have noticed she had a face on the back of her head, like some incarnation of multifaced Hindi god Shiva, who has a third eye—as Gaga does on her chin—and Vishnu. That said, her hair looks unmistakably like the Pope’s hat.

Over the score to Alfred Hitchcock’s 1950s noir thriller “Vertigo,” composed by Bernard Hermann, Gaga intones her monologue from “G.O.A.T.,” or “Government Owned Alien Territory.” Being an alien in the sci-fi tradition, Gaga’s “Mother Monster” bears some resemblance to the biorobotic Replicants and the Cylons from “Battlestar Galactica.” Add in the futuristic cityscapes, and you have a direct link to the mother of all fembots, “Maria” in Fritz Lang’s 1927 Art Deco sci-fi film, “Metropolis,” a dystopia where “workers” are kept separate from the “thinkers.” The Machine-Man robot is created, Frankenstein-style, in the likeness of worker Maria, who is then sent to seduce and wreck havoc among the workers, while Maria herself is held captive.

“Metropolis” is astoundingly popular with divas: recently, Beyoncé, Janelle Monáe, Kylie Minogue, and Britney Spears have all referenced the film. The concept of “pop starlet as programmed fembot” is just too powerful a metaphor for these music stars to resist. Gaga’s most obvious influences, though, Madonna’s “Metropolis”-themed “Express Yourself” video and Queen’s blue-screen “Metropolis”-sampling video, “Radio Gaga,” focus more on the division between the upper class sending God-like missives from above and the lower class minions below. Less obvious an influence? Artist Mariko Mori’s 1996 alien goddess from her “Miko no Inori” video installation. 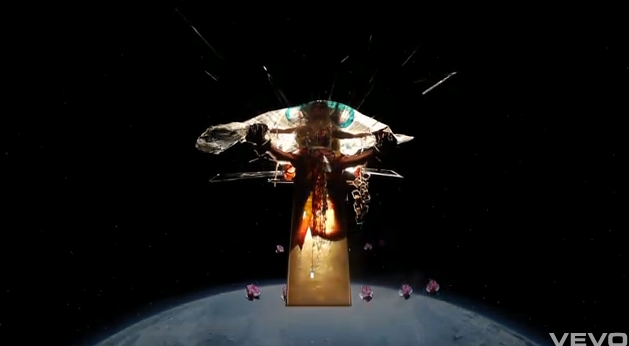 You gotta hand it to Gaga: While Britney, Beyoncé, and myriad others are happy to play sexy cyborgs—and Madonna went for the ’20s glamourpuss trapped in a tower—not one of them is willing to show something so gross as a mucus-covered alien birth that rips the mother in two.

Naturally, artist H.R. Giger and his designs for the 1979 film “Alien” is a big influence here. Also, perhaps a little of the humanoid Cylon resurrection tanks from 2004’s revamp of the television series, “Battlestar Galactica.”

Another explicit reference is Salvador Dali’s 1943 painting, “Geopoliticus Child Watching the Birth of the New Man,” which is about the emergence of the United States as a superpower in World War II (his hand crushing Europe). Maybe there is a motif developing? 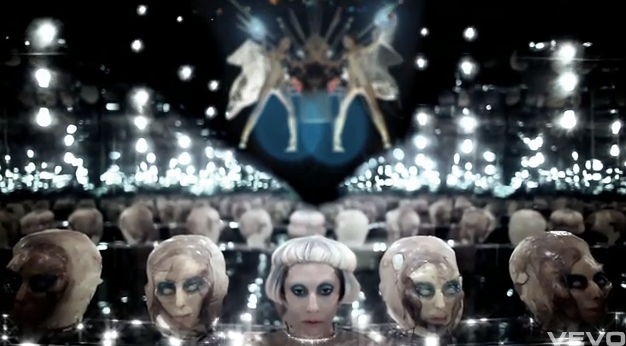 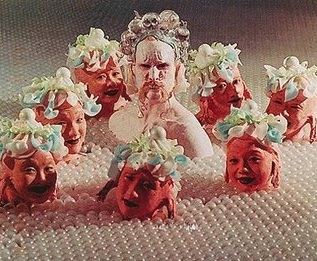 The Mother Monster warbles about the “new race” she’s birthing, one without prejudice or judgment. Creepily, though, the imagery shows a bunch of half-formed Gaga clones, blond and white, calling to mind Adolf Hitler’s nightmarish vision of the Master Race. The disembodied mannequin heads, along with this video’s fixation on gooey body fluids, has much debt to artist Matthew Barney’s riff on creation, “The Cremaster Cycle” — as well as Aldous Huxley’s “Brave New World,” “Star Wars,” “Battlestar Galactica,” and any other sci-fi tale where people are born in test tubes.

Besides Maria in “Metropolis,” the imagery also calls to mind William Blake’s “The Great Red Dragon” series, painted between 1805 and 1810, which was inspired by the biblical book of Revelations. In “The Great Red Dragon and the Woman Clothed in the Sun,” the dragon is prepared to eat the child of a pregnant woman. This painting, too, is the one that drove Francis Dollarhyde crazy in Thomas Harris’ 1981 novel, “Red Dragon.” 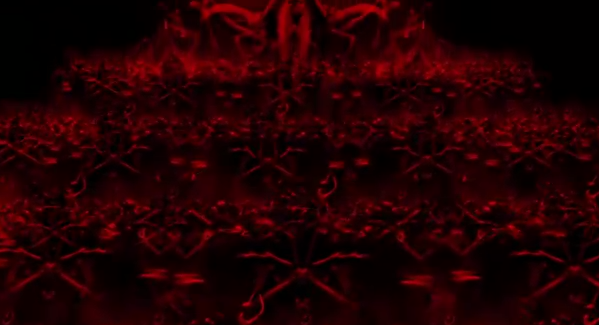 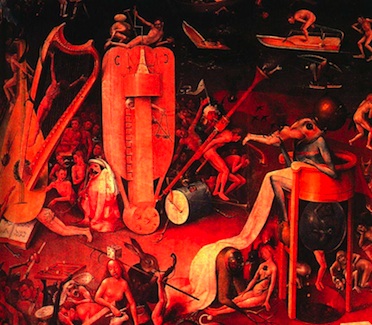 Uh oh, evil is brewing, beneath the perfect race. It resembles this detail of the Hell panel in Hieronymus Bosch’s “The Garden of Earthly Delights”—and well, most Renaissance depictions of Hell.

7. Mother of all evil. Source: “Barbarella” 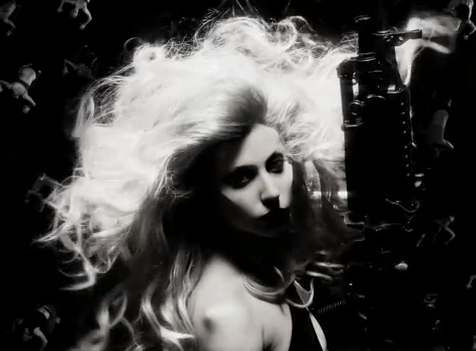 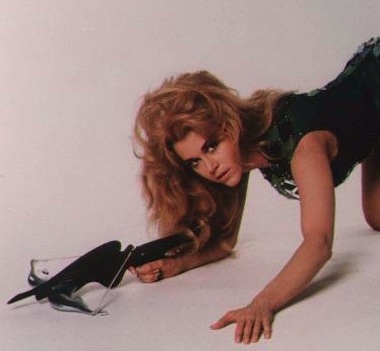 Gaga’s machine-gun-wielding, big-haired space babe is an obvious homage to 1968’s “Barbarella,” based on French adult comic books. The original space bounty huntress is nearly killed by her own pleasure in the Excessive Machine.

Once all the children of Mother Monster wake up and the real “Born This Way” kicks up, then the video is pretty standard. Lady Gaga and her multiracial entourage dance Bob Fosse and Alvin Ailey styles in tribute to the Gaga goddess above. Gaga, in a tux and skull makeup, boogies with Canadian model Rick Genest, a.k.a. “Zombie Boy,” who’s tattooed like a skeleton from head to toe. There’s some sexy writhing, and flashes to the goddess, the test-tube Gagas, et al. 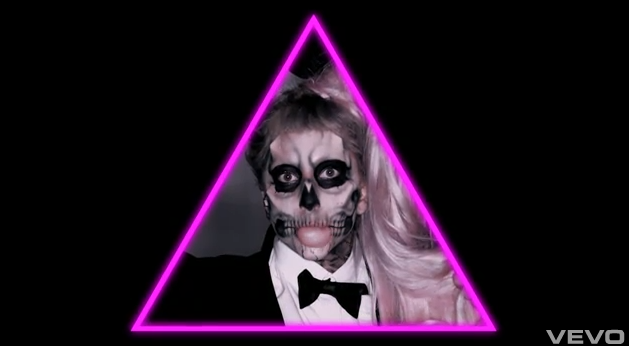 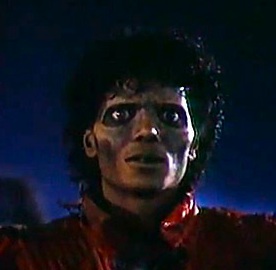 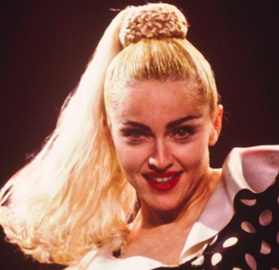 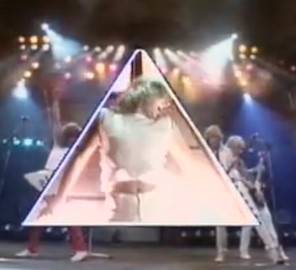 Right at the end, we get Gaga in a deserted alley, flashing white gloves—an homage to the King of Pop. The scene cuts to a closeup of a gap-toothed Gaga shedding a single tear, looking much like her hero, Madonna. Jacko and Madge are honored again with the final shot of Zombie Gaga dressed like a cross between MJ in 1983’s “Thriller” and ponytailed Madonna on her 1990 Blond Ambition Tour.

The pink triangle is now right-side-up, a reclaimed symbol of gay pride. It also looks an uncanny amount like the triangle camera gimmick used in Def Leppard’s 1983 video for “Foolin'”—another ’80s pop-music influence?

If this combination of high art and low art doesn’t make your head spin, I don’t know what will. Clearly, there is supposed to be a message in there about the state of the world and the need for tolerance, but it is hard to suss out from the surrealistic image overload. The Mother Monster seems to have an endless appetite for pop culture throughout the ages, no matter how brilliant, pretentious, or plain silly. Isn’t that what acceptance is all about?