This article notes the process, patterns, and characteristics of blown glass and describes popular miniature blown objects, such as mini decanters and tumblers. It originally appeared in the August 1942 issue of American Collector magazine, a publication which ran from 1933-1948 and served antique collectors and dealers.

Before treating in detail of the miniature or toy pieces of Blown Molded, or as it still known, “blown three-mold” glass, it might be well to become better acquainted with the forerunner of this popular type of early glass. Miniatures have a wide appeal to all collectors, irrespective of their particular specialty. Its size has the charm that inheres in baby things. 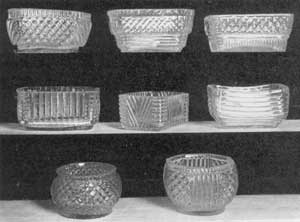 Illustration I: Eight Molded Salt Dishes: These were made prior to the advent of blown three-mold glass. They were produced at the New England Glass Company, Cambridge, Massachusetts, after 1818, and at the Boston & Sandwich Glass Company after 1825.

The earliest advertisements of our glass companies invariably refer to their “molded” glass, meaning that type of glass which was (blown) molded in various designs, from iron molds, into which the patterns had been cut. The glass was blown into these one-part molds which, at least in the smaller objects, were full-sized. After being removed from the mold, the top edges were finished by hand.

Illustration I pictures eight molded salt dishes. These were produced by the New England Glass Company of Cambridge, Massachusetts, after they started operation in 1818 and after 1825 by the Boston & Sandwich Glass Company of Sandwich, Massachusetts. The salt dishes are comparatively common in New England and may be purchased for a few dollars in many shops, where they are not recognized as being of any particular value.

Most collectors today are familiar with the so-called blown three-mold glass and they will note that the patterns in the molded salt dishes are suggestive of the thinner and better-known types of blown three-mold which followed, when improvements in methods and moldmaking were achieved.

Illustration II: Miniature Decanters and Salt Dish: The decanters have their original stoppers, which is unusual, and range from one and one-quarter to two and one-half inches in height. The salt dish is a unique specimen.

Molded salt dishes are thick and heavy. They are smooth on the inside surface, whereas the thinner blown three-mold pieces taken from the hinged, three-part molds almost invariably have indentations on the inside surface, following the pattern on the exterior. The somewhat clumsy molded salt dishes have the top finished by hand, usually with a perfectly plain ground edge which chipped easily from the hard usage they endured. Of the eight salt dishes pictured in Illustration I, all have the plain edge (and all are chipped) except that one on the right, at the end of the middle row. This plainest of all these salt dishes has the edge carefully and laboriously cut with a fine ribbing.

Illustration III: Three Miniature Cream Pitchers: Those at the right and the left are a pair and match the pattern of the decanters in Illustration II. The center one is a unique specimen. All of these were finished by hand and vary slightly in size and shape.

Molded pieces, especially the salt dishes, are easily recognizable because of their similar characteristics. The majority are oblong, often with beveled corners. They all have simple patterns, consisting of diamond quilting, vertical or horizontal ribbing, often with a fan-shaped ornament, either on the ends or on the corners. Only one of the salt dishes shown here has a plain base. One has a cube pattern in the bottom, but most of those found will have a plain sunburst or a sunburst with a bull’s-eye in the center. Larger pieces, such as sugar bowls, are extremely rare.

Blown Molded, or that which is better known as blown three-mold, is an outgrowth of this heavy molded glass. Methods and processes were improving rapidly. The three-part hinged molds, which may well have been perfected by Deming Jarves the inventive genius who founded the Boston & Sandwich Glass Company on Cape Cod in 1825, made this type of glass much easier to manufacture. The salt dishes made by the improved molds are much lighter in weight and usually have folded rims, instead of the ground-off edges.

Illustration IV: A Toy Tumbler, Mug and Hat: These three pieces were all made from the same mold. The tumbler is about one and three-quarter inches high.

Among the earliest of the blown three-mold pieces produced at Sandwich are the miniatures, or toys. Early advertisements of the Boston & Sandwich Glass Company, dating between 1825 and 1830, specifically mention “toy decanters.”

It is difficult to understand just why so many toys were produced at a period when needed essentials were in such constant demand in this country. Aside from the fact that these little pieces must have sold well, since so many of them were made, the idea must have been suggested by our mother country, England. In the Victoria and Albert Museum in London may be seen delightful toy models of simple baluster-stemmed glasses with decanters en suite, included among the furniture of a doll’s house of the early 19th Century.

The bulk of the furniture is of Queen Anne style, and one little piece of silver bears the date-letter 1713, so it is presumed that the glasses are of the same date. The little English tea sets of opaque white glass decorated with flower sprays in color, usually referred to in this country as Bristol, were made about 1870-80.

Illustration V: Miniature Flip and Cordial Glasses: All are undoubtedly of Sandwich origin. The flip glasses, or toy tumblers, are two and one-quarter inches high; the cordial glasses, two and one-half inches high.

The fact that miniatures were popular abroad as early as the 18th Century undoubtedly inspired our own glassmakers.

For any collector who has advanced to the stage where a limited variety of rarities offers appeal, our tiny blown three-mold objects will give a great deal of pleasure. Besides, there is always the lure of the unique specimen, which invariably comes to light in any specialty from time to time.

In Illustration II may be seen a pair of toy decanters, with the original stoppers. These are usually found without stoppers but I might add that styles in stoppers varied. According to some old records in my possession, the purchaser could order any type of stopper he wished, though the variety was limited in those early days. Any of these toy pieces are exceedingly rare in color. I have never heard of the decanter being found in any shade except yellow.

The little molded piece with handles, shown between the decanters, was probably designed as a salt dish. It is one and one-quarter inches high and is the only one known like it. 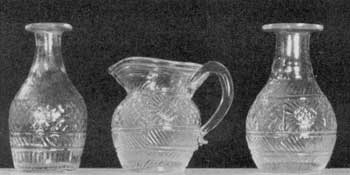 Illustration VI: Toy Decanters and Cream Pitcher: These decanters, at most, hold one-quarter pint. The cream pitcher and the decanter at the right are of the same pattern and could have been made from the same mold.

In Illustration III are three small cream pitchers, two matching the toy decanters in pattern. This pair differ in height, one being two inches and the other two and one-quarter inches. Being finished by hand, they all vary slightly in size and sometimes in shape. The cream pitcher in the center is unique. The pair of cream pitchers with the sunburst have concentric rings in the base but the third cream pitcher has a star, heavily impressed, with a dot in the center. I have never seen any of these little cream pitchers in color but since Deming Jarves was so fond of experimenting in different tints, it would not sur  prise me to hear of one anytime. The tragedy to me would be to learn of one that I could not add to my collection!

In Illustration IV may be seen a toy tumbler, mug and hat, all apparently produced from the same mold. The little tumblers have been referred to as “whiskey tasters” and also as medicine glasses, so-called because they were supposed to hold one dose. It would seem more reasonable to assume that in the old days people utilized such objects for whatever served their purpose. The toy tumblers are usually about one and three-quarter inches high. The hat is the smallest I have seen and measures one and one-half inches at the highest point. 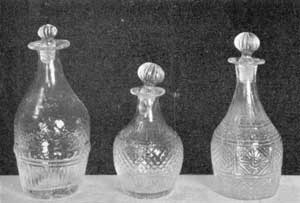 Illustration VII: Three Quarter-Pint Decanters: The one at the extreme left is, in design, the rarest of any of the decanters illustrated with this article.

Illustration V pictures a pair of toy tumblers, sometimes thought to be miniature flip glasses, two and one-quarter inches high. I have never seen another pair, though they doubtless exist. This tapering variety is much rarer than the tumbler with straight sides. The latter are encountered fairly frequently. The cordials in the two-and-a-half-inch size are also quite rare, and sold at high prices prior to 1929. The usual style is pictured. In my collection are others with the cylindrical or funnel-shaped bowl, which are even rarer.

Illustration VI illustrates decanters ranging from three and one-half to four inches in height, which would hold about a quarter-pint. More patterns are to be found in these quarter-pints, though any of them are scarce and some are extremely rare. It will be noted that the decanter at the right-hand end of the row matches the cream pitcher next to it. Very likely, both were made from the same mold. Being finished by hand, this was not a difficult accomplishment.

The three decanters in Illustration VII are also quarter-pints. The one at the extreme left is the rarest, in design, of any pictured.

It has been brought to my attention lately that many new collectors, in collecting antiques, are puzzled as to where to begin. My first advice is not to become an accumulator! Look at your friends’ hobbies. Study. Decide whether you want something useful or something to lock up in a cabinet. A great many people start collecting because they have inherited certain pieces and so they go on from there. Many start by buying furniture. And when that happens, glass, lustre, china, and prints just naturally follow. Nothing is more irritating than to hear, or read in print, words urging collectors to buy “better” things. It is not a matter of “better” things, for “better” often merely means something more expensive. Everyone cannot afford to stock a museum. Suit your individual needs and purposes, and the resulting satisfaction will be your reward.