This article describes the designs and different variations of paperweights created by Nicholas Lutz at the Boston and Sandwich Glass Company. It originally appeared in the August 1941 issue of American Collector magazine, a publication which ran from 1933-1948 and served antique collectors and dealers.

More than one veteran collector of American glass, particularly Sandwich, will be surprised to learn that a workman at the Boston and Sandwich Glass Company made, among other things, artistic glassware of a type that for centuries had been associated with Venetian masterpieces. 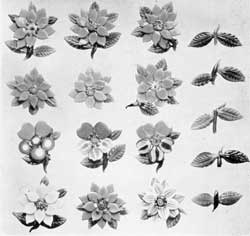 Flowers and leaves for paperweights all made by Lutz.

It is no secret that all our early factories, from Stiegel’s to recent times, imported skilled European blowers to ply their trade here and teach native workmen. But for obvious reasons they worked on wares intended for the everyday use of cisatlantic families. There was a greater demand abroad for the more artistic decorative pieces. It took some decades for the same demand to develop here, but from then on the artistic ability of the workers found appreciation and reward.

Among some of the earliest fragments excavated at Sandwich were found many pieces of “striped” glass, the type that inevitably suggests the use of candy cane — such as you see in so many paperweights. To all appearances they were of Venetian origin, and yet the fragments were so numerous that it was impossible not to conclude that this type of glassware must have been made at Sandwich. Years of research work and study prove that such ware was the handiwork of one Nicholas Lutz.

Nicholas Lutz was born in St. Louis, Lorraine, France. He began his apprenticeship at the local glass factory (Cristalleries de St. Louis, founded 1767) at the age of ten and continued there until he reached the age to join the colors and serve his four years of required military service.

ILLUSTRATION I: Typical Paperweights Made by Nicholas Lutz at Sandwich

Later he came to this country and at first settled in White Mills, Pennsylvania, until he was called to the Boston and Sandwich Glass Company. He worked there from 1869 to the closing of the factory in 1888. According to Victor Lutz, a son of Nicholas, now a resident of Boston, Massachusetts, his father was a master workman in all lines of glassmaking, but specialized in fancy colored glass, bowls for cutting, chandelier arms and thin glass and stemwork; meaning by the latter, blown glass and goblets, wine glasses, and so forth. Paperweights were made after hours and were not a commercial product of the factory.

Victor Lutz asserts that his father brought with him from France pieces of cane and other decorative material used in forming paperweights. From this it is a fair assumption that he was instructed in the art of making paperweights while learning his trade at St. Louis. Some of the choicest paperweights obtainable today were made there during the 1840’s and 1850’s. However, it should be noted that the weights which are in the possession of the Lutz family today do not bear French characteristics. They are as thoroughly characteristic of New England as Bette Davis!

ILLUSTRATION III: Flowers and Leaves for Paperweights: These were all made by Lutz. The six flowers at the top are all red poinsettias. Below them, three flowers characteristic of his work. In the bottom row, other flowers. At the right hand, leaf sprays made by Lutz with a special hand tool.

In Illustration III may be seen a variety of flowers and leaves which were made by Mr. Lutz for use in paperweights. The six at the top are red poinsettias. Even though some of the fragile leaves have been broken away in the course of the years, it may be seen that the arrangements vary, as well as the center of the flowers. Some centers contain a single piece of cane, while others have gold-colored beads.

The three flowers in the center are particularly characteristic of Lutz. That at the extreme left is of a coral-red color, with the center and three lower petals in a white polka-dot effect. Those flowers having two large plain upper petals, with three smaller striped petals below, may always be counted on as specimens of Lutz handiwork. The three flowers in the bottom row (from the left) are white, deep blue, and white, with petals striped in blue.

Mr. Lutz had a special iron tool with which he pressed the leaves. Those examples illustrated are so characteristic that one can be practically certain of the identification of a Lutz weight, from the style of these leaves alone.

Illustration VI shows cherries, pears, and carrots, which Mr. Lutz made up in different colors. One member of the Lutz family owns a pair of vases having paperweight bases, containing a group of the colored vegetables.

In Illustration II may be seen two of the red cherries, with an arrangement of green leaves. This same style weight may be found with blue berries instead of red. Of course they appear much larger in the paperweight because they are greatly magnified by the gatherings of glass which cover them. 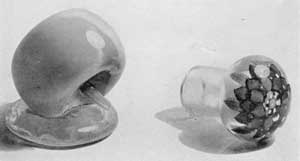 ILLUSTRATION IV: An Apple Paperweight by Lutz: The other at the right may have been designed for use as a doorknob or large bottle stopper.

It would appear that Mr. Lutz took his adopted country quite seriously, for I find a number of examples of his work in red, white, and blue, though, of course, they belong also to the French tricolor. But he was working in America. The first weight at the left, in Illustration I, is an example. The smaller weight in the center has white petals in the flower, dotted in bright blue. The numerous leaves are in his usual style, in green. The third paperweight at the right end, is in a brilliant deep blue. The cane in the center of the flower is like a white rose, with red heart.

The cherry weight in Illustration II has been described in a previous paragraph. The flower in the center paperweight is a deep purplish-blue, with green leaves. It is not very well formed, being somewhat broken. The third paperweight, at the right end of the row, is a red cross decorated with cane and has two green leaves. It will be noted that one of the leaves is attached backward, a difficult matter to explain for a man known to have been capable of the most skillful work.

In Illustration IV is by all odds one of the most beautiful of the apple paperweights that I have ever seen. It is a beautiful yellowish- green in color with a streak of orange shading across the center. (The white spot on top is merely a reflection from one of the photographer’s lights.) Of all the paperweights remaining in the hands of the Lutz family, this one is the best example of fine workmanship. 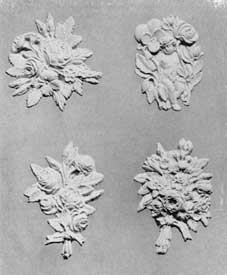 ILLUSTRATION V: Composition Bouquets: Probably to be silvered or colored before being encased in a paperweight in the manner described by Gustav Pazaurek as "glassed-in pastes."

Beside the apple is a curious paperweight, having a large hollow stem. It looks as if it might have been made as a stopper for a large cologne bottle. Mr. Lutz remembers that at one time there were two of them, one at each end of a rod, so it may have been designed as a doorknob. The flower is deep blue, with the usual green petals.

The floral arrangements (one of which has a cupid in the center) shown in Illustration V remind us of the gold-colored ornaments used to embellish those fascinating old-fashioned lace-paper valentines. They are made of some sort of composition, possibly plaster-of-Paris. They were found, by members of the Lutz family, in a sewing machine drawer. It seems most likely that these were intended to be silvered, like many of the silver busts, animals, and so forth, found in old paperweights. The process is an old one, used by almost every country in Europe in decorative wares. Apsley Pellatt took out a patent in 1819 for a “crystallo-ceramic or glass incrustation which consisted in inclosing medallions and ornaments of pottery, metal or refractory material in glass.” Gustav Pazaurek, in his book, Glaser der Empire — und Bledermeierzeit referred to this type of work as “glassed-in pastes.” The process is known to have been widely used in Baccarat during the 1870’s.

Victor Lutz is my authority for the statement that the best of the paperweights owned by his family have disappeared, one way or another, over the years since his father’s death. Certainly those pictured here cannot, for the most part, represent his best work. In fact, they are undoubtedly the culls. One has a rough pontil mark that is so uneven that the paperweight will not rest evenly. Some have rough pontils and the others are ground out. I find no evidence of any of his weights having star-cut bases or any type of background against the ornaments within the weights. They are as plain and severe as our New England forefathers for whom they were intended. 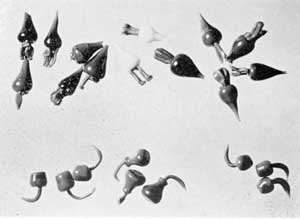 ILLUSTRATION VI: Other Paperweight Ornaments: Here are shown cherries, pears, and carrots made in various colors of blown glass by Lutz for use in paperweights.

Nevertheless, it seems strange that a man steeped in the artistic traditions of the Cristalleries de St. Louis should not have produced finer paperweights, showing some evidence of the amazingly intricate workmanship associated with the product of that factory. The choicest of all weights came from France. However, he undoubtedly produced much finer work than those few remaining examples indicate.

A most important book issued by the Boston and Sandwich Glass Company came into my possession lately. It contains eighty photographs of groups of wares made by this company. There are many forms of ornamental glassware of considerable interest, particularly the dolphin dishes in various forms, ornate epergnes, and so forth. Doubtless, many of the most elaborate of these pieces came from the hands of Nicholas Lutz.

Art Glass PaperweightsSome of the earliest paperweights were made in Venice in the 1840s. They we…